The term existentiality was used in the work of philosophers in the 1800s and the 1900s. The concept holds that people should focus on dealing with the present conditions of individual persons while taking into account the individuals’ emotions, responsibilities, actions, and thoughts. This concept is reflected in Shakespeare’s King Lear play. For, example, King Lear knows that it is his responsibility to equally share his kingdom among his three daughters.

He however decides to divide his kingdom to his daughters according to how the daughters supposedly love him.

Don't use plagiarized sources. Get your custom essay on
“ King Lear – Existentialism ”
Get custom paper
NEW! smart matching with writer

He thus disinherits Cordelia because of her genuineness which does not please him. Instead, he shares his realm to his other two daughters since Cordelia speaks to him bluntly. Even though Cordelia’s statement is temperate and honest, it makes King Lear annoyed. By making this decision, King Lear demonstrates that he is not rational but is just thinking of himself. King Lear shows absurdism in sharing his kingdom because he should share his wealth equally to his three daughters. He instead decides not to share it to Cordelia even though she is one of his daughters but he thought was not pleasing to him.

He should not have ranked as one of his daughter. By being either good bad, King Lear’s daughters remain his. He should also understand that what happens to a bad person can as well happen to a good person. This concept is evident later when we see his 2 daughters, who he formerly thought as special, seeing their father as foolish and old.

On the other hand, Cordelia has a reason to decide to stay alone without cooperating with her fellow sisters because of what her father did to her.

Her sisters could have reasoned and told their father that it was unfair not to give Cordelia a share of his kingdom since she was their sister. Their actions however show that they are also selfish. Cordelia is in perpetual despair after her father refuses to bequeath to her a portion of his kingdom even though she is married by the king of France later. Moreover, King Lear denies Kent facticity by sending him away from the country for being against the decision of the king to refuse to give a share to his wealth to Cordelia – his daughter.

This is despite the fact that Kent returns into the country baring a new name – Caius. King Lear’s authenticity makes him not to change his decision regarding how he has divided his wealth. In addition, King Lear facticity makes him employ Caius without knowing that Caius is indeed Kent whom King Lear previously sent from his country. While experiencing his own freedom as angst, King Lear discovers that his two daughters do not respect him any more for they are now powerful.

Moreover, and their father at this time now does not have any power to control them. King Lear experiences anxiety and anguish after having seen that his daughters are ungrateful. This issue makes him to be enraged. He thus recalls the facticity that he gave to his daughters and feels very infuriated. He thus summarily denounces the daughters. At the end, King Lear is very embarrassed due to his two daughters who now do not respect him until he becomes mad. Cordelia and Kent, whom he thought as useless, are taking care of him. 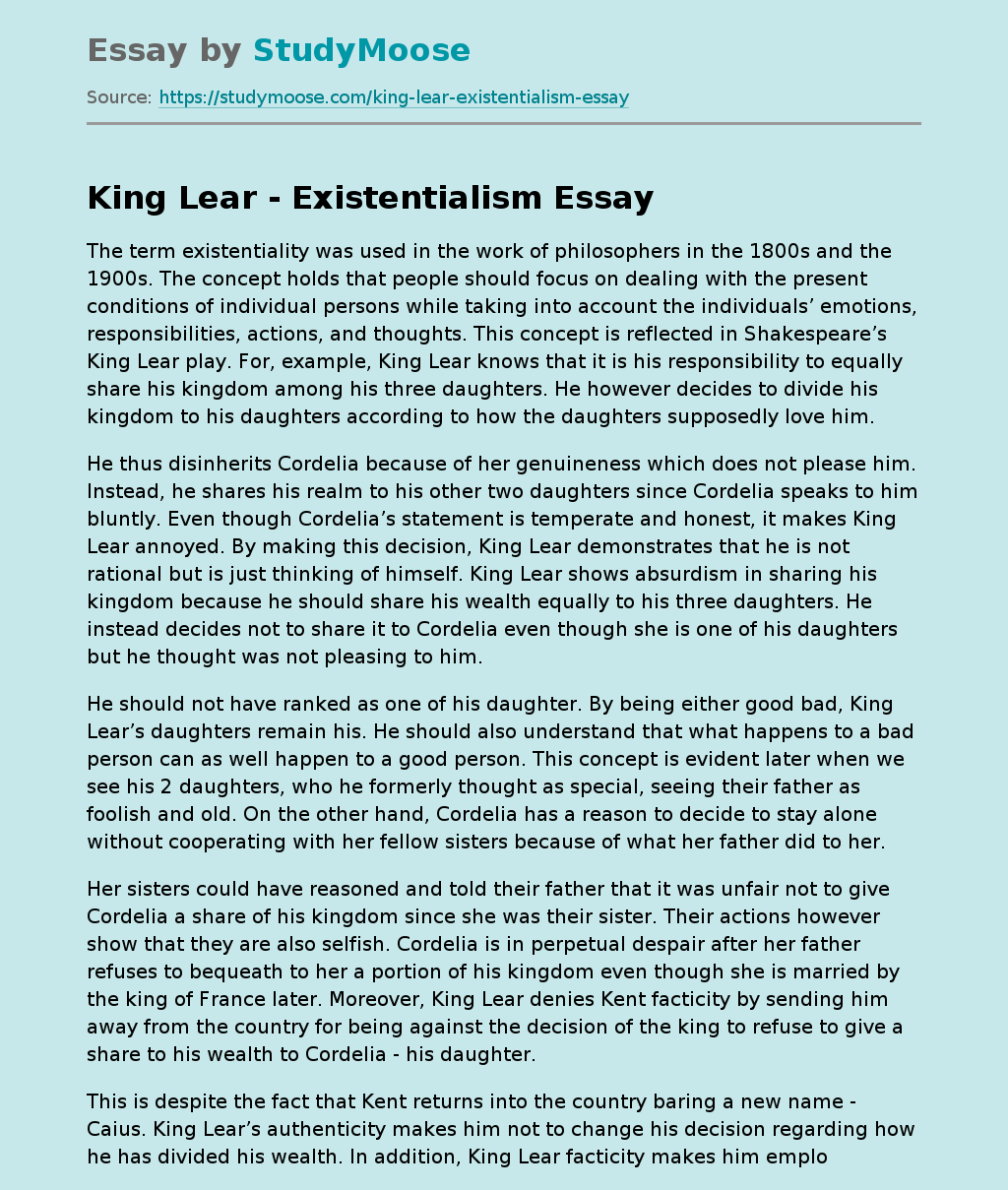