Role reversal is central to the plot of King Lear, and perhaps one of the most pivotal scenes which stresses role reversal has truly occurred is Act I Scene IV. Following both the foolish division of Lear’s land and the utter destruction of natural order, King Lear begins to realise his ‘power’ has been stripped and even those below him begin to realise this and treat him accordingly. The act welcomes a disguised Kent who still wishes to serve his King despite Lear’s earlier mistreatment towards him.

Don't use plagiarized sources. Get your custom essay on
“ King Lear: Act I Scene IV ”
Get custom paper
NEW! smart matching with writer

Act I Scene IV also introduces the Fool which has been mentioned to have been in hiding since Cordelia’s banishment.

The jester begins to commentate on Lear’s illogical decisions and the consequences of them while Lear infuriates at the fact that he is receiving little, or no respect from those around him. Firstly, Lear close to the beginning of the scene realises he has been mistreated as a King and as a father.

There seems to be a kind of unnatural theme running throughout the play heretofore and it continues in Act I Scene IV. Lear realises himself that he has been ‘neglect of lately’ which is bizarre to an audience as he is, or was the King.

Despite his current status, he still was noble: does nobility and respect dissolve with retirement? Indeed, Lear probably didn’t retire but rather quit his responsibilities and leadership but still, an audience may begin to sympathise with Lear as he is receiving nothing from his daughters, nothing as a father, and nothing as a nobleman.

The first amazing sign of disrespect against Lear is that of Goneril’s steward Oswald. He addresses the king as ‘My Lady’s father’. Immediately, and quite rightly so, Lear is enraged that a steward of his daughter would not address him as King.

Lear quickly curses Oswald: ‘whore-son dog! ‘ ‘slave! ‘ ‘cur! ‘. With the exclamation marks emphasising Lear’s sheer amazement that this steward, would disrespect him in such manner. He follows the insults by striking Oswald and at once a disguised Kent, remaining loyal to Lear, trips up Oswald and orders him to leave if he knows what is good for him. In spite of the audience agreeing that the steward could have addressed Lear in a politer manner, it is at once ignored as Lear’s hubris is shown again.

Lear is surprised at the fact that he isn’t addressed as King, but, should he be really? – no. He’s given his title away and shouldn’t expect to retain it without actually accepting the responsibilities with the title. There also seems to be an abundance of symbolism too in Act I Scene VI. Shakespeare allows all the characters, even those below of Lear, to acknowledge a form of sanity and logic in order to mirror the fact that sanity and any form of logic is what Lear is clearly lacking. A knight talks about ‘judgement’ while Kent describes Lear ‘poor’.

Everyone around Lear can see clearly, and relighting the theme of blindness to the truth, the only character to ignore any form of truth is the protagonist: Lear. The fact that such a close and loyal friend of Lear would call him ‘poor’ is also of upmost importance as it raises the question: What made Lear rich prior to his foolish division of the land? Was it money, love from his daughters, or respect? Either way, Lear is hastily losing all three as his mental state is portrayed to be decaying. The fool then makes his first appearance in the play where he immediately begins to comment on Lear’s wrong doings.

Ironically, the fool is easily able to foil Lear as he appears to hold superior judgement and logic over blind Lear. The first line of the fool signifies the fool acknowledges Lear has made mistakes as the fool offers Lear his ‘coxcomb’, indicating that the fool has realised that the true title of fool is now Lear’s as he has made terrible decisions as a consequence of lack of judgement. Despite Lear welcomes the fool as a fine fellow, ‘pretty knave! ‘, the fool is quick to criticise Lear in the scene and executes his lines with pun and riddles to go unnoticed.

The fool makes a series of good judgements and clear observations of Lear. He rightly exclaims Lear has ‘given away’ all titles leaving himself nothing. He reinforces this by calling Lear a ‘shealed peascod’ emphasising there is nothing left of Lear, bit by bit Lear has decayed and dissolved to nothing. The fool also makes a further statement that Lear has had his ‘head bit off by its young’. Here Shakespeare uses a metaphor to suggest Goneril and Regan have both betrayed their father and Lear has done wrong by banishing Cordelia, his only remaining loyal young. Also read about role of the fool in King Lear essay

The fool throughout the scene seems to counteract Lear’s follies to bring Lear to his senses where Lear seems to react to, to an extent. Lear in sorrow doesn’t know himself any more. Lear is sorrow confides in the fool that ‘This is not Lear’ and vulnerably asks ‘Who am I? ‘. Here the audience probably feel the most sympathetic towards Lear for the first time in the play as he himself has acknowledged that he has changed for the worse and cannot even recognise himself. The theme of sanity is also perpetuated as Lear ‘strikes his head’.

This strong imagery allows the audience to see Lear has fallen to pieces and has begun to beat himself up about it. Goneril unleashes a venomous sequence of lines demanding that Lear stops the ‘brothel’ and ‘disordered’ madness in her home, demanding that Lear reduce his knights. The fact that she ‘doth speak for’ instead of politely asking, implies that if Lear doesn’t voluntarily meet her demands, she will act against him and has the power to as she and Regan have shared leadership of his once-was kingdom.

This amounts to another outburst of rage where Lear calls his daughter a treacherous ‘bastard’ and voices that he without delay will leave to find hospitality with Regan. This reintroduces the angry persona of Lear, seen previously in Act I Scene I where Cordelia was the victim of his wrath and curses. Lear prays to the Gods to ‘dry up’ her ‘organs of increase’, essentially wishing his future blood and grandchild dead, where the audience are shocked to see Lear befall his own daughter.

These irrational thoughts, however, do suggest a scarred father and a hurt father which again builds up the idea of a vulnerable Lear. The ending of this scene brings an ominous feel to the play as it seems anarchy is evolving in a flash with a nihilistic society emerging as the divine king is left powerless and helpless. Subsequently, this ultimately leaves an idea of uncertainty amongst the audience as the audience begin to question the future of the play. The ending of this scene portrays a weak, isolated and a lone Lear. 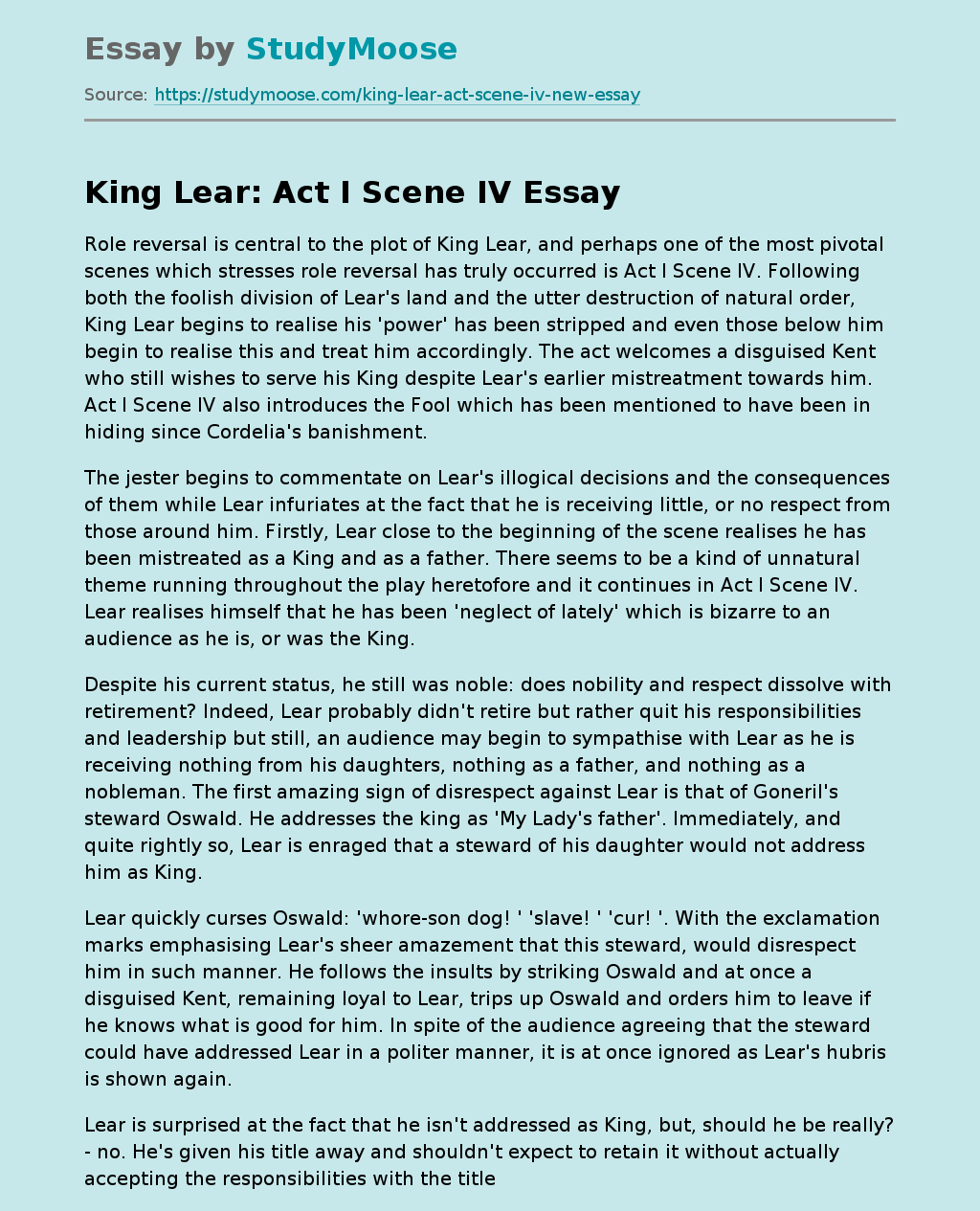