Thou, nature, art my godess
The start of Edmund’s soliloquy, shows he does not subscribe to human law, rather the more brutal ‘law of the jungle’, survival of the fittest etc
the curiosity of nations to deprive me, for that I am some twelve or fourteen moonshines lag of a brother?’
Edmund, professing how unfair it is that he does not get his father’s inheritance simply because he is younger than Edgar
my dimensions are as well compact, my mind as generous and my shape as true, as honest madam’s issue?’
Edmund, saying he is the same as if he were legitimate
Who in the lusty stealth of nature take more composition and fierce quality than doth, within a dull, stale, tired bed go to the creating a whole tribe of fops got ‘tween asleep and wake?
Edmund, saying surely he’s better as he was made in a moment of passion and not bored, ritualistic sex.
Don't use plagiarized sources. Get your custom essay on
“ King Lear Act 1 scene 2 quotes ”
Get custom paper
NEW! smart matching with writer

Nothing, my lord
Edmund to Gloucester in response to Kent’s asking of ‘what paper were you reading?’, echoes Cordelia
If it be nothing I shall not need spectacles
Gloucester to Edmund in response to Edmund telling him he has nothing in his pocket, irony as like Lear he has failed to see the true nature of his child
the oppression of aged tyranny
In ‘Edward’s’ letter, insults age, similar to Goneril and Regan’s criticism of Lear
These late eclipses in the sun and moon portend no good to us
Gloucester to Edmund, shows he sees the heavens as symbolising & causing chaos and order in human affairs
nature finds itself scourged by the sequent effects:…brothers divide;…the bond cracked ‘twixt son and father
Gloucester to Edmund, shows that whilst Edmund sees his plan as ‘natural’ Gloucester sees the opposite; the division between families in unnatural
The king falls from bias of nature; there’s father against child
Gloucester to Edmund, shows he sees the king’s decision as going against nature as well
As if we were villains by necessity, fools by heavenly compulsion
Edmund, ridiculing his father’s beliefs that the heavens dictate our fate.
Get to Know The Price Estimate For Your Paper
Topic
Number of pages
Email Invalid email

+84 relevant experts are online
Hire writer
I should have been that I am, had the maidenliest star in the firmament twinkled on my bastardizing
Edmund, he thinks that the fates and heavens play no part in the creation of our characters
How long have you been a sectary astronomical?
Edgar to Edmund’s lamenting of astronomical charts, shows he too ridicules Gloucester’s ideas of fate
A brother noble, whose nature is so far from doing harms that he suspects none
Edmund about Edgar, laughing about how easily he is convinced of Edmund’s innocence
Let me, if not by birth, have lands by wit; all with me’s meet that I can fashion fit.
Last lines of the scene, shows he’ll do anything to get what he wants
Perry Mullins
Share 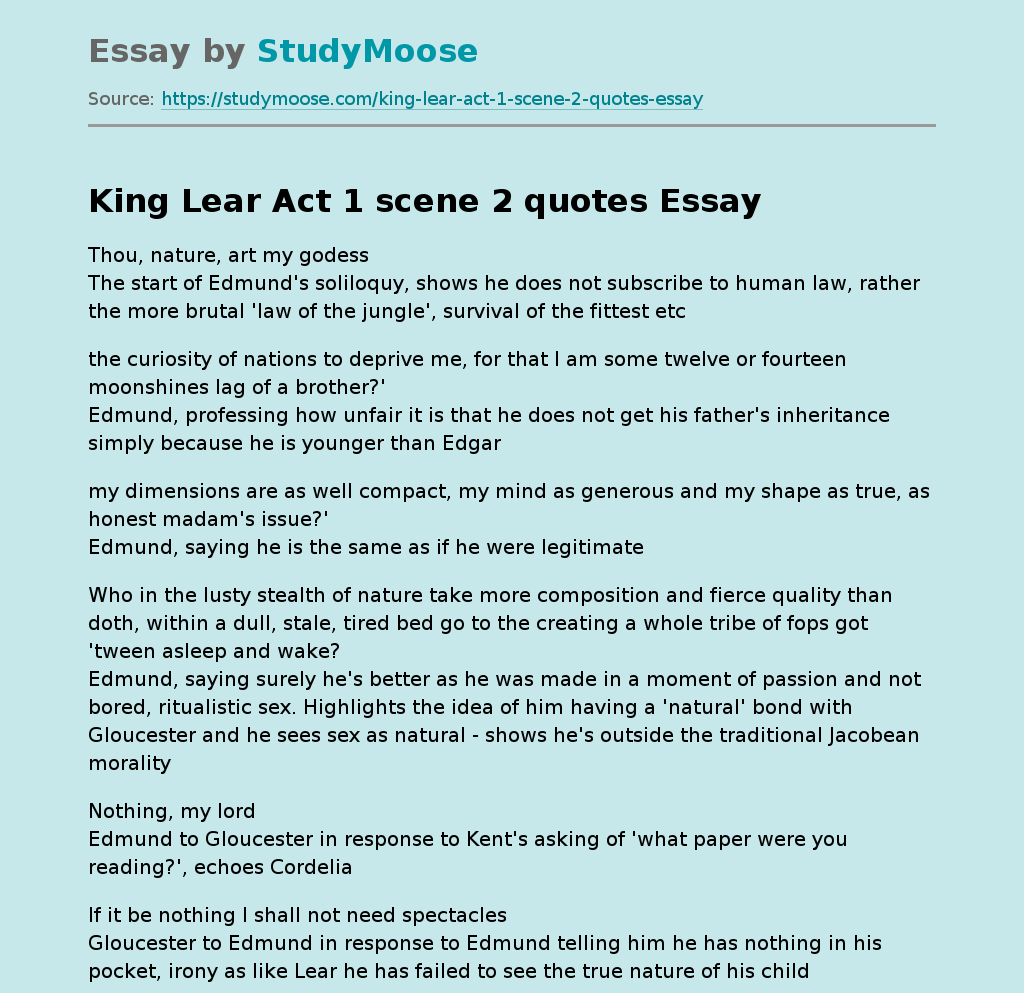