I thought the king had more affected the Duke of Albany than Cornwall
Kent to Gloucester, shows that the King is known to have favourites
There was good sport at his making
Gloucester to Kent, making jokes about Edmund’s illegitimacy, perhaps gives an excuse to why Edmund does the things he does
This young fellows mother could
Gloucester’s response to Kent’s ‘I cannot conceive you’
I have a son, sir, by order of law…who yet is no dearer in my account
Kent to Gloucester about Edmund, shows he too expresses affection in monetary terms, highlights the contrast between Edmund’s ‘natural’ bond with his father and Edgar’s ‘legal’ bond
We shall express our darker purpose
Lear to his court, shows he knows what he’s doing is wrong, uses the royal we – shows he is still powerful at this point and feels in control
’tis our fast intent to shake all cares and business from our age, conferring them on younger strengths, while we unburthened crawl toward death
Lear to his court, announces his intention to give his land to his daughters, describes age in an infantilising way + shows he sees his kingship as a burden
What can you say to draw a third more opulent than your sisters?
Lear to Cordelia, telling her to make her speech, shows he’s already decided who is getting the larger portion of land
I love you more than word can wield the matter…beyond all manner of so much i love you
The start and end of Goneril’s speech, suggests she has rehearsed it as it starts and ends the same
I profess myself an enemy to all other joys which the most precious square of sense possesses
Regan’s speech, uses calculating language
Dearer than eyesight, space, and liberty, beyond what can be valued rich or rare
In Goneril’s speech, shows how hyperbolic and exaggerated it is, also shows she too values love in monetary terms
My love’s more richer than my tongue
Cordelia’s aside, which immediately allies the audience to her, and shows that her love for Lear cannot be expressed with words
Nothing, my lord
Cordelia’s famous response to Lear’s demand for flattery
I love your majesty according to my bond; nor more nor less
Cordelia to Lear, very matter of fact statement of how much she loves him
Mend your speech a little lest it may mar your fortunes
Lear to Cordelia telling her to try again
Obey you, love you and most honour you
Cordelia to Lear, telling him how she loves him, sounds almost like wedding vows
So young, my lord, and true
Cordelia to Lear, shows her honesty compared to her sisters
With my two daughters’ dowers digest this third
Lear telling his court what to do with Cordelia’s dower, uses harsh consonants to sound like he’s spitting with rage
I loved her most
How Lear felt about Cordelia
Only we still retain the name and all the additions to a king
Lear, shows he’s not prepared to give up the luxuries of being a king, only the responsibilities
Royal Lear, whom I have ever honoured as my king, loved as my father, as my master followed…
Kent to Lear, shows Kent’s dedication to the King and perhaps suggests he’s flattering him in a similar way to the way Goneril and Regan were
What wouldst thou do old man?
Kent to Lear, shocking insult of age, trying to shock Lear into listening
See better Lear
Kent to Lear telling him to have more foresight
I know you what you are
Cordelia to her sisters, shows that she knows their wicked ways, refers to them almost as animals
For want of that of which I am richer, and such a tongue as I am glad I have not
Cordelia argues back against Lear’s disowning of her, talks of being richer of character by contrast to Lear’s use of monetary terms for love
Alberta Collins
Share 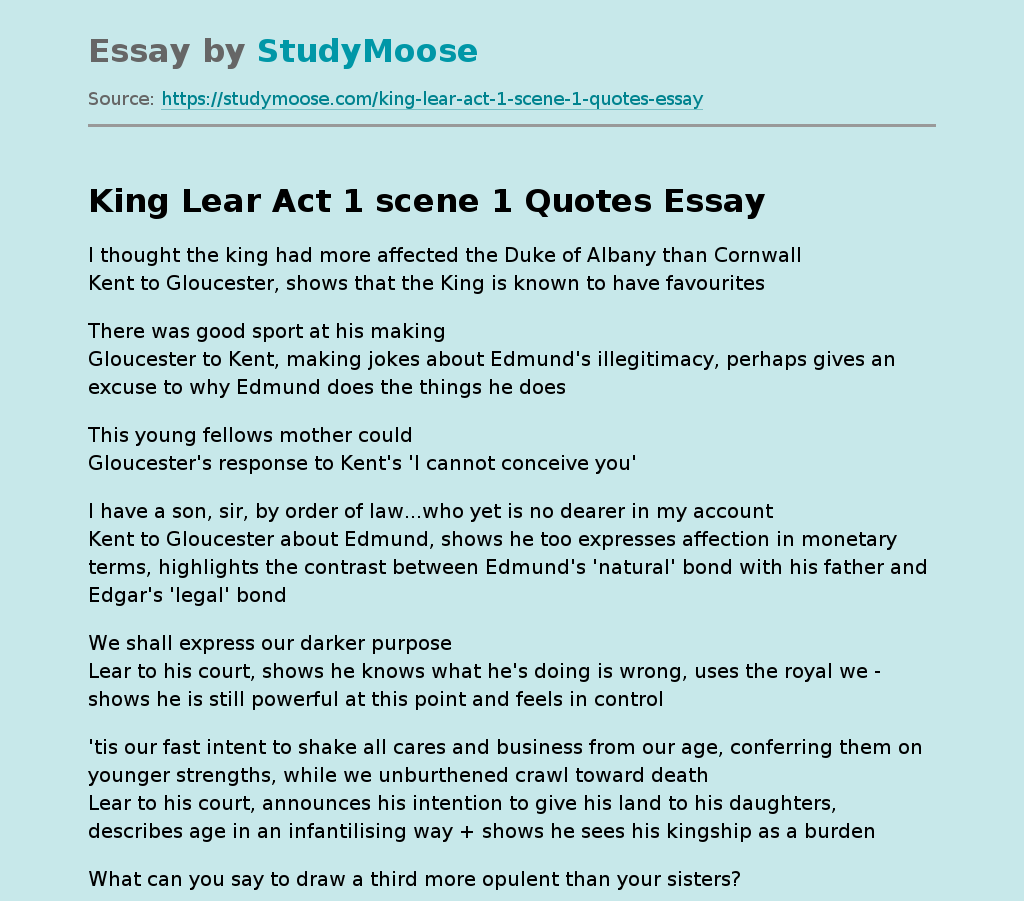