Abstract
The case highlights the ethical issues involved in Kentucky Fried Chicken’s (KFC) business operations in India. KFC entered India in 1995 and has been in midst of controversies since then. The regulatory authorities found that KFC’s chickens did not adhere to the Prevention of Food Adulteration Act, 1954. Chickens contained nearly three times more monosodium glutamate (popularly known as MSG, a flavor enhancing ingredient) as allowed by the Act. Since the late 1990s, KFC faced severe protests by People for Ethical Treatment of Animals (PETA), an animal rights protection organization.

Don't use plagiarized sources.
Get Your Custom Essay on KFC in India Case Study Assignment (Ethical Issue) Just from $13,9/Page

PETA accused KFC of cruelty towards chickens and released a video tape showing the ill-treatment of birds in KFC’s poultry farms. However, undeterred by the protests by PETA and other animal rights organizations, KFC planned a massive expansion program in India. (see http://www.icmr.icfai.org/casestudies/catalogue/Business%20Ethics/BECG044.htm) Objectives

Understand the significance of cultural, economic, regulatory and ecological issues while establishing business in a foreign country.

Appreciate the need for protecting animal rights in developed and developing countries like India.

Understand the importance of ethics in doing business.

Examine the reasons for protests of PETA

“Each bird whom KFC puts into a box or a bucket had a miserable life and a frightening death. People would be shocked to see our footage of a KFC
supplier’s employee who walks through a barn, carelessly lighting lamps and letting flames fall on the terrified birds. The air inside these filthy barns reeks of ammonia fumes, making it difficult for the birds to breathe. No one with a grain of compassion should set foot in KFC.”

“The chicken they serve is full of chemicals, and the birds are given hormones, antibiotics and arsenic chemicals to fatten them quickly.”

On August 20, 2003, a five-foot tall chicken complete with an ensemble of feathers and beak hobbled on a pair of crutches outside Kentucky Fried Chicken’s (KFC) Indian outlet in Bangalore. The chicken was brought by PETA (People for Ethical Treatment of Animals) activists, who carried placards reading, “Quit India” and “Stop Playing Fowl” (a pun on “Foul”).

The chicken was placed at the centre and a peaceful protest was held against the alleged ill treatment of birds in KFC’s poultry farms. Media persons were called to give the demonstration a wide coverage.

Explaining the rationale behind the protest, Bijal Vachcharajani, special projects coordinator of PETA, said, “Ours is the land of Gandhi. Just as 61 years back our leaders gave a call for colonizers to quit India, we too are saying we will not tolerate cruel multinationals.” On the 61st anniversary of the ‘Quit India’ movement, PETA India wrote a letter to the Managing Director of Tricon Restaurant International, the parent company of KFC, asking them to close their sole KFC outlet in India. They got no reply. PETA activists decided to protest against KFC by carrying crippled chicken, which represented the birds suffering in the KFC’s farms.

PETA claimed that after two years of intensive campaigning to increase animal welfare standards in poultry farms, other foreign fast food restaurants operating in India like McDonald’s and Burger King had improved the treatment of animals specially raised and slaughtered for food. Only KFC had not acted. Though PETA had organized other protests earlier, the crippled chicken campaign became the precursor for more intensive protests. PETA’s was one of the many shows of protest against KFC’s Indian outlet.

KFC was founded by Harland Sanders (Sanders) in the early 1930s, when he started cooking and serving food for hungry travellers who stopped by his service station in Corbin, Kentucky, US. He did not own a restaurant then, but served people on his own dining table in the living quarters of his service station. His chicken delicacies became popular and people started coming just for food. Kentucky Fried Chicken was born. Soon, Sanders moved across the street to a motel-cum-restaurant, later named ‘Sanders Court & Cafe,’ that seated around 142 people.

Over the next nine years, he perfected his secret blend of 11 herbs and spices and the basic cooking technique of chicken. Sanders’ fame grew and he was given the title Kentucky Colonel by the state Governor in 1935 for his contribution to the state’s cuisine. Sanders’ restaurant business witnessed an unexpected halt in the early 1950s, when a new interstate highway was planned bypassing the town of Corbin. His restaurant flourished mainly due to the patronage of highway travellers. The new development meant the end of this. Sanders sold his restaurant operations. After settling all his bills, he was reduced to living on a meager $105 social security cheque.

But Sanders did not lose hope. Banking on the popularity of his product and confident of his unique recipe for fried chicken, Sanders started franchising his chicken business in 1952. He called it Kentucky Fried Chicken. He travelled the length and breadth of the country by car, visiting as many restaurants as possible and cooking batches of chicken. If the restaurant owners liked his chicken, he entered into a handshake agreement that stipulated payment of a nickel for each plate of chicken sold by the
restaurant.

By 1964, Sanders franchised more than 600 chicken outlets in the US and Canada. The same year, he sold his interest in his company in the US for $2 million to a group of investors. However, he remained the public spokesperson for the company. KFC grew rapidly under the new owners and issued shares to the public on March 17, 1966. In July 1971, KFC was acquired by Heublein Inc. for $285 million. By then, KFC had over 3,500 franchised and company-owned restaurants in the world….

Peta protest KFC – part 1
Peta protest KFC – part 2
NY Times Article
http://www.ecomall.com/greenshopping/peta.htm
http://www.japantoday.com/jp/news/245005
http://www.foxnews.com/story/0,2933,115108,00.html
http://multinationalmonitor.org/hyper/mm0196.03.html
Analysis
There are a number of issues relating to this incident that demonstrate the ethical and moral issues surrounding business. KFC’s business in India leads to a wide range of direct and indirect employment related to the business as a result of the investment by the company. KFC claims that it does not own chicken the farms. How honest are the claims that KFC is making?

How reliable are the claims made by those who oppose KFC’s activities? What conflicts arise between the responsibilities that KFC has to the treatment of chickens and the local community, and to its shareholders, suppliers and employees, other external stakeholders? Your Assignment

This is an independent assignment.

Download and complete the KFC case analysis document. Save the document as
named but by adding your last name then first to the end of the file name (separated by an underscore _ ) where indicated.

Answer the above questions.
You are to research this case using the above sources and others that you discover. Provide a work cited list only of those sources that you USE. . For full marks, use terminology and concepts from the course and its text. See the rubric at the end of the KFC case analysis document. Submit your completed copy of the KFC hard copy in class and electronic copy to the class email address by deadline date (see class website for due and deadline dates). NO EXTENSION WILL BE ALLOWED. 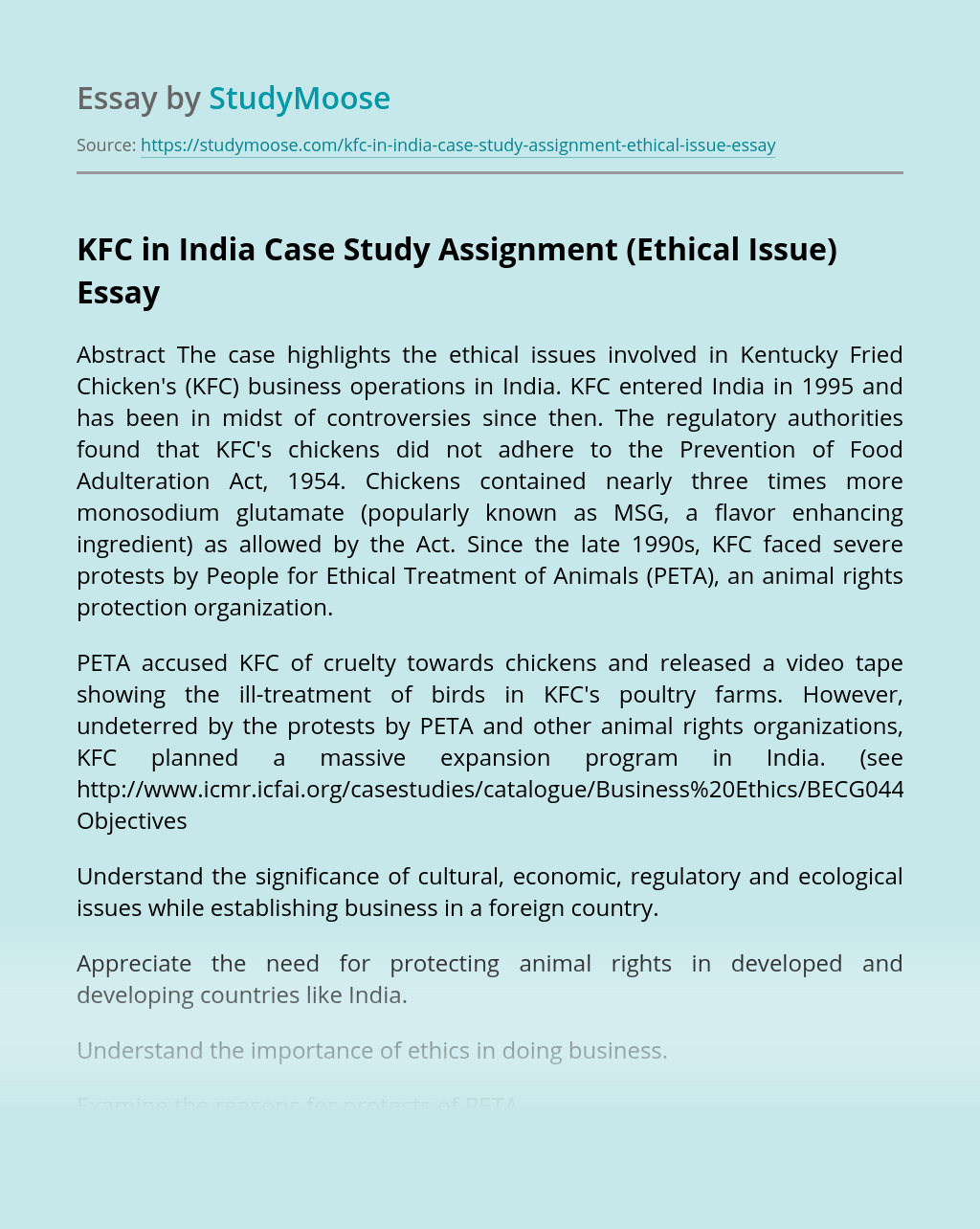 Rate this post This case study involves three retailers that engaged in alternative approaches to eGrocer strategy formulation. The primary goals were to assess the relationship between a company’s business model(s) and its performance in the online grocery channel and to determine if there were other company and/or market related factors that could account for...

Rate this post Porter’s five forces model will help us to determine in what ways this new venture will use it when thinking about business strategy and the impact of IT. 1. Buyer power: Buyer power is high when buyers have many choices from whom to buy, and low when there are few. As a...

Rate this post In 1992, Gujarat tea Processors and Packers Limited (GTPPL), manufacturer-cum-marketer of WAGH BAKRI brand of tea, introduced a new product into the market – tea Quik tea bags. GTPPL, a leading player in the Gujarat tea market has been in this business since 1893. Wagh Bakri range of products enjoyed 50-55 %...

Rate this post Operations: Assembly of Consumer Durables( Washing Machines, Dishwashers, Clothes Dryers) The performance appraisal system which is followed in IFB is: The company has a 3 phased approach in its system of Performance management. They are Planning, Review and Assessment. Based on the results of these steps, compensation, benefits, training and compensation revisions...

Case study of Airtel and reliance in India

Rate this post Problem Statement How can LIDL maintain its position and market share in the supermarket sector? What are the risks of entering in markets beyond Europe? Analysis SWOT Analysis Strengths: Low prices good quality relationship Good marketing communications Good staff-customer relationship Wide target segment, people of all ages and backgrounds Weaknesses: Understanding of...

The Western Ghats or the Sahyādri constitute

Rate this post The Western Ghats or the Sahyādri constitute a mountain range along the western side of India. It is a UNESCO World Heritage Site and is one of the eight hottest hotspots of biological diversity in the world. It is sometimes called the Great Escarpment of India. The range runs north to south...

Rate this post India has emerged from a long period of economic hibernation. The country’s economic scene appears excellent ill all spheres. This year can be taken as the most flourishing year that India has ever had after India attained freedom. “ India’s GDP growth in the eighties averages 5% per annum. The growth rate...