Don't use plagiarized sources.
Get Your Custom Essay on KFC Business Pest Analysis Just from $13,9/Page

KFC maintain & design its price policies keeping in view the income & income distribution of the people living in the country. That’s why all the classes are the target market of KFC. And the most important factor is the political instability. As in Pakistan, there are political crises faced by the government, these greatly affect the business of KFC.

The economic factors includes the income of the people, KFC is going to target.

Income is an important economical factor of the KFC. This factor decides which class KFC is going to target. In the early time of KFC, they were focusing on the upper class but they after some time changed their strategies and started to target the mass market by introducing some different kinds of meals and offers through which we can say that they target the middle & the upper level as well. The consumption behavior of the people plays an important role. KFC also estimated the consumption behavior of the people, their liking and disliking and make decision accordingly. Payment method is an important factor in the economical factor of the KFC. They check the behavior of the regarding the payment methods of the people. They check whether the gives money in the form of cash or plastic money.

The Social/Cultural Factors includes the Social Class, as it is discussed earlier that KFC target all the class including the upper class, upper middle and lower middle class etc. Although the culture of KFC from where they come is entirely different but they have adopted the Pakistani culture as they had to serve the people living in Pakistan having entirely different culture from other areas. And it has not only adopted the Pakistani culture but also the Religion as well. They offer Halal foods to the customers, which is the symbol that they adopted the Muslim religion strategies as they had to serve in the Muslim country, to the Muslim customers. 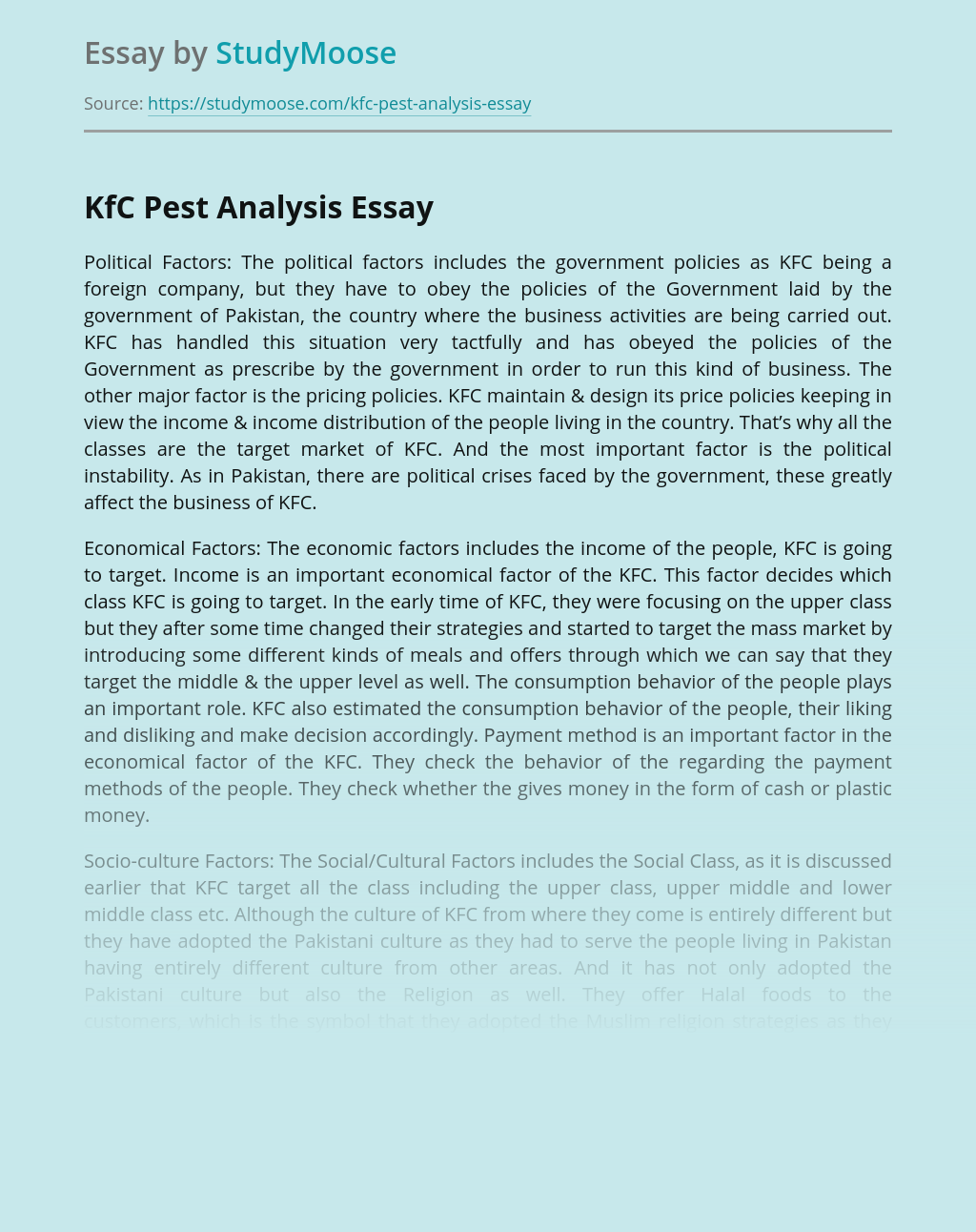 The Difference Between Negative and Postive Peer Pressure

Rate this post Peer pressure is not bad thing. We all are influenced by our peers, both negatively and positively. It helps define who we are and how we feel about subjects in our lives. It is how we chose to react to peer pressure that defines who we are as an individual. Are we...

Life is not a bed of roses

Rate this post There are more sorrows than joys in life, if someone thinks deeply about it and becomes upset, he can never be happy. We cannot ignore the bitter truths of life and can only search some moments of happiness to keep ourselves satisfied. The idea of a happy life differs from man to...

Rate this post During the first World War, Britain lost approximately 887,000 men, nearly 2% of its population as a whole. To this day, World War 1 remains Britain’s costliest conflict. Given the enormous carnage of the war, any serious artistic treatment of World War 1 has to take the basic truths of war into...

Rate this post OBJECT ORIENTED SOFTWARE DESIGN DIGITAL ASSIGNMENT -2 NAME: Veda shruthi K REG.NO: 16BCE0617 SLOT: C1 Title: Online shopping system Aim: To develop website for users to shop online and pay for the product either through online or offline. Objective: This is a web based application which helps users to first sign up...