Kashmir has been fighting for freedom for more than 65 years now and on the other hand pakistan has been desperate to bring it under its administration and control since the independence ! Not only pakistan but there have been border disputes with china also that from too pre-independence times . People of kashmir want either an independent country or they want to get it merged with pakistan . Lets come to an uncertain independent kashmir first : India -nuclear power , pakistan – nuclear power , china – nuclear power , what makes kashmiris think that they wont be destroyed by any of these countries after it will get independent ?

Fighting for years for something and then just leaving it for nothing , doesnt make sense.

Turn in your highest-quality paper
Get a qualified writer to help you with
“ Kashmir Dispute ”
Get high-quality paper
NEW! AI matching with writers

Any of these countries can justify the use of nuclear weapons in the international community by simply stating that we ended an aged dispute for ever or by saying we ended the threat of a possible war between these countries , same like USA justified use of nuclear weapons in hiroshima and nagasaki by saying if we had not made a nuclear strike, the war would have continued for many years to come.

Proficient in: My Trip To Kashmir

That will be a complete waste !

Now lets come to uncertain kashmir under pakistan , taking a common example ,if any kashmiri is asked “what is the reason behind all this ? Why you want to get merged with pakistan” ? More certainly and probably his answer will be : “india has been brutal and rude , India has killed almost 95,000 people of kashmir since the independence” ! but how can any one of us forget when east pakistan which is now bangladesh asked for freedom from pakistan in 1971 , pakistan killed over 3 lakh bangladeshi muslims in just a span of a year and a total of 400 thousand women were raped .

How are they going to manage Kashmir with their own sector Baluchistan asking for freedom, i fail to understand. How can kashmir trust pakistan then ? however some provide u with d reason that we want pak because it is a muslim territory, but let me bring in your kind notice that there are 3 lakh mosques in India that is more than any other country of the world, 27 crore muslims which is way too higher than the population of pakistan. More over I dont want IED blasts in kashmiri mosques.

In 1965 pakistan started a war against india which ended up with a ceasefire, in 1971 pakistan started it again and lost terribly and surrendered . And afterwards in kargil war 1999 , pakistan badly lost ! Morever pakistan was the place from where USA was operating its military forces against the so called brotherly muslims of pakistan , Afghanistan. pakistan has taken no decision to even help the killing of muslims in burma, afghanistan or palestine which certainly makes kashmir best with india only. As long as it stays with india it is safe ! thank you. 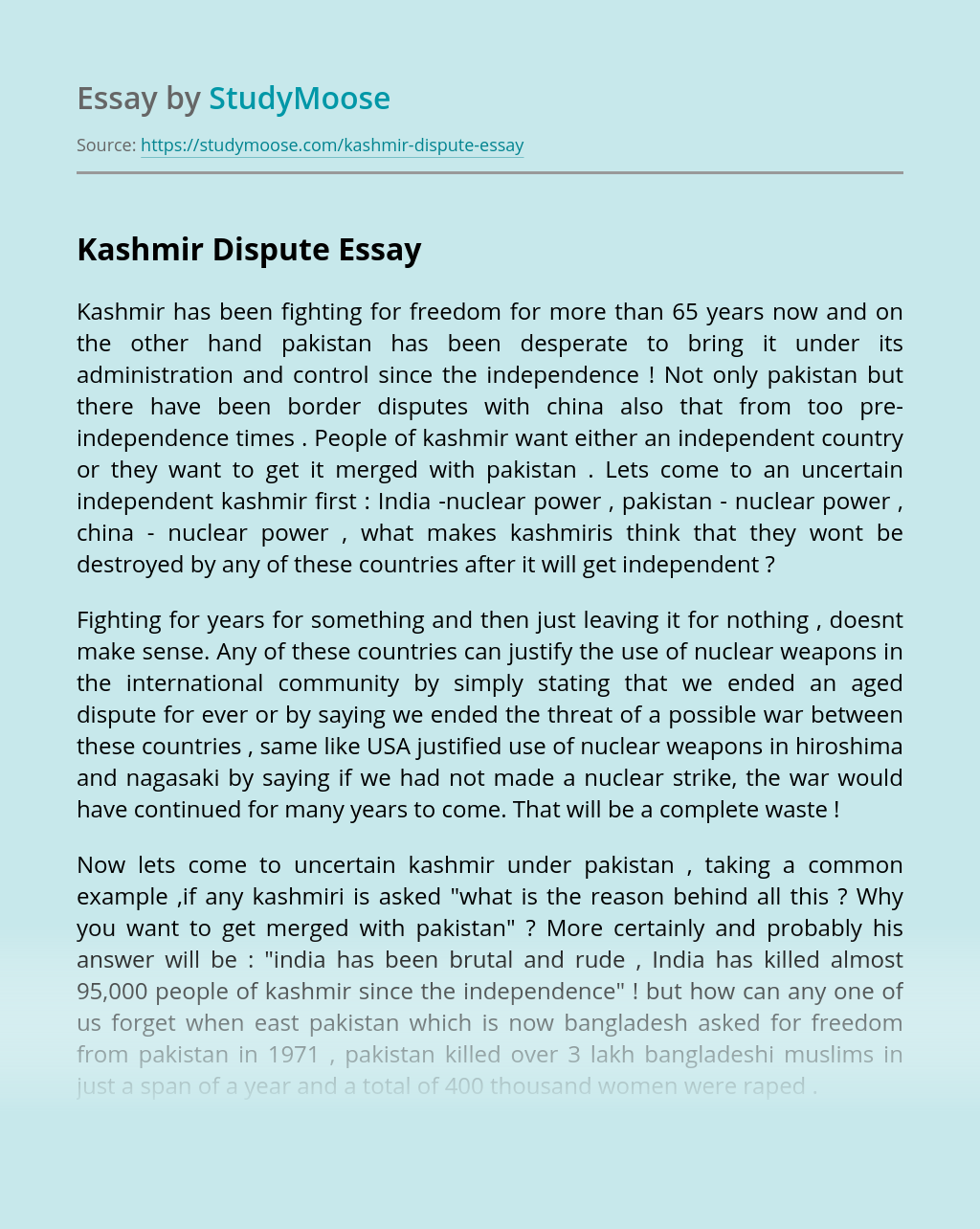 Turn in your highest-quality paper
Get a qualified writer to help you with
“ Kashmir Dispute ”
Get high-quality paper
Helping students since 2015
Stay Safe, Stay Original