In _Bhagavad- Gita_, dharma and karma are two controlling forces of the ultimate destinies of the people to preserve and conserve the Hindu social order. Arjuna, the protagonist, is torn between two choices, either to perform his dharma for the emancipation of the spirit or to fight against his kin that would probably result to evil karma. He belongs to a compelling position in the Hindu social order because of his birth and occupation, making him locked up from the supposed ultimate freedom (Mack, 1995).

Don't use plagiarized sources. Get your custom essay on
“ Hindu Religion in India ”
Get custom paper
NEW! smart matching with writer

The dharma of Arjuna complicates his status in the social hierarchy thus makes him doubtful in performing his duties and responsibilities both as a Hindu warrior and a kin. He may have the control over his spirit and he may choose to receive a good karma, but his dharma contradicts and requires him to somehow disobey his self.

In addition, according to Krishna, if he will withdraw from action, it is thus an act of self-delusion and the renunciation of moral and social responsibility.

Krishna said that he [Arjuna] ‘…must learn to endure fleeting things- they come and go!” (2nd teaching: 14). He is convincing him to “fight the battle” (2nd: 18) and so if “he has courage, he is fit for immortality” (2nd: 15). He is always reminding him that his dharma requires him to fight.

He adds, “No one exists for even an instant without performing action; however unwilling, every being is forced to act by the qualities of nature” (3rd: 5). Arjuna’s hesitation may be valid in some points but it is orderly since it is human nature.

He is overcome by doubts because he does not wish to be guilty of the death of his kin, but Krishna tell him that “actions imprisons the world unless it is done as sacrifice; freed from attachment, Arjuna, perform action as sacrifice!” (3rd: 9).

From the philosophies of Krishna mentioned above, it can be scrutinized that an individual in the Indian society must not think that performing dharma can be immoral once it may result to evil karma, but rather internalize that when performing deeds, “always perform with detachment any action you must do; performing action with detachment, one achieves supreme good ” (3rd: 19). They are not ruling dharma and karma, but they govern “to preserve the world” (3rd: 25).

_Shakuntala_ also portrays a strong Hindu society and Hinduism. There is sadness and melancholy due to dharma and karma but the ultimate destinies are well-controlled. Hinduism may provide sufficient free will to man but it does not permit him grappling from the moral ambiguities that may lead to tragedy (Yohannan, 1994).

Shakunta was punished because she did not able to perform her religious duties. As what Priyamvada told the King, Shakuntala “…has been engaged in the practiced of religious duties”; but because of her fascination and attachment to the King, she forgot her dharma for the first time, leading her to suffer evil consequences (karma). Priyamvada told her assumption to Anasuya when they were in the garden of the hermitage and said “I fear a terrible misfortune has occurred.

Sakoontala, from absence of mind, must have offended some guest whom she was bound to treat with respect”. Shakuntala is the daughter of the hermit leader and a Brahman so she really has to perform her religious duties otherwise she will disobey the norm. Nevertheless, she is not destined to be forever shattered and helpless; she must gain back what and who she deserves to have, and that is to be united with the King.

Through the presentation of the fate of the characters, we can say that Hinduism still favors people as long as they keep their faith and deeds according to it.

For the question _how can be both paradoxical and at the same time complementary, Shakuntala_ and _Bhagavad- Gita_ have their own ways of portraying an Indian society and its religion. In _Bhagavad- Gita,_ Krishna is really the personal and true-existing (though appeared in a different form) adviser who keeps on reminding and convincing Arjuna to perform his dharma otherwise a great consequence might happen. Arjuna tends to remain in his humanness nature but his dharma tries to desolate him from his morality, so there is his friend charioteer (Krishna) who keeps on warning him by teaching philosophies. He is overcome by his morality by killing his own kin. On the other hand, Shakuntala has not been warned before she committed such sacred crime. She was more overcome by the humanness nature that she tends to forget her dharma. Her emotions desolate her, so as punishment, her own fault kills the chance to be loved by the King.

Because of their social status in the society, their dharma becomes more demanding and regulating. Both show a pleasurable sense of life and their religion guides them not to end up tragically. Both value knowledge as means to salvation and liberation. In _Shakuntala,_ the trial which she brings upon herself matures her in the knowledge of love and prepares her for the life which she is destined to live (Yohannan, 1994). In _Bhagavad- Gita_, “knowledge is obscured” (3rd: 39), therefore Krishna tells Arjuna that “kill this evil that wins knowledge and judgment” (3rd: 41) because “knowing the self beyond understanding sustain the self with the self” (3rd:43) 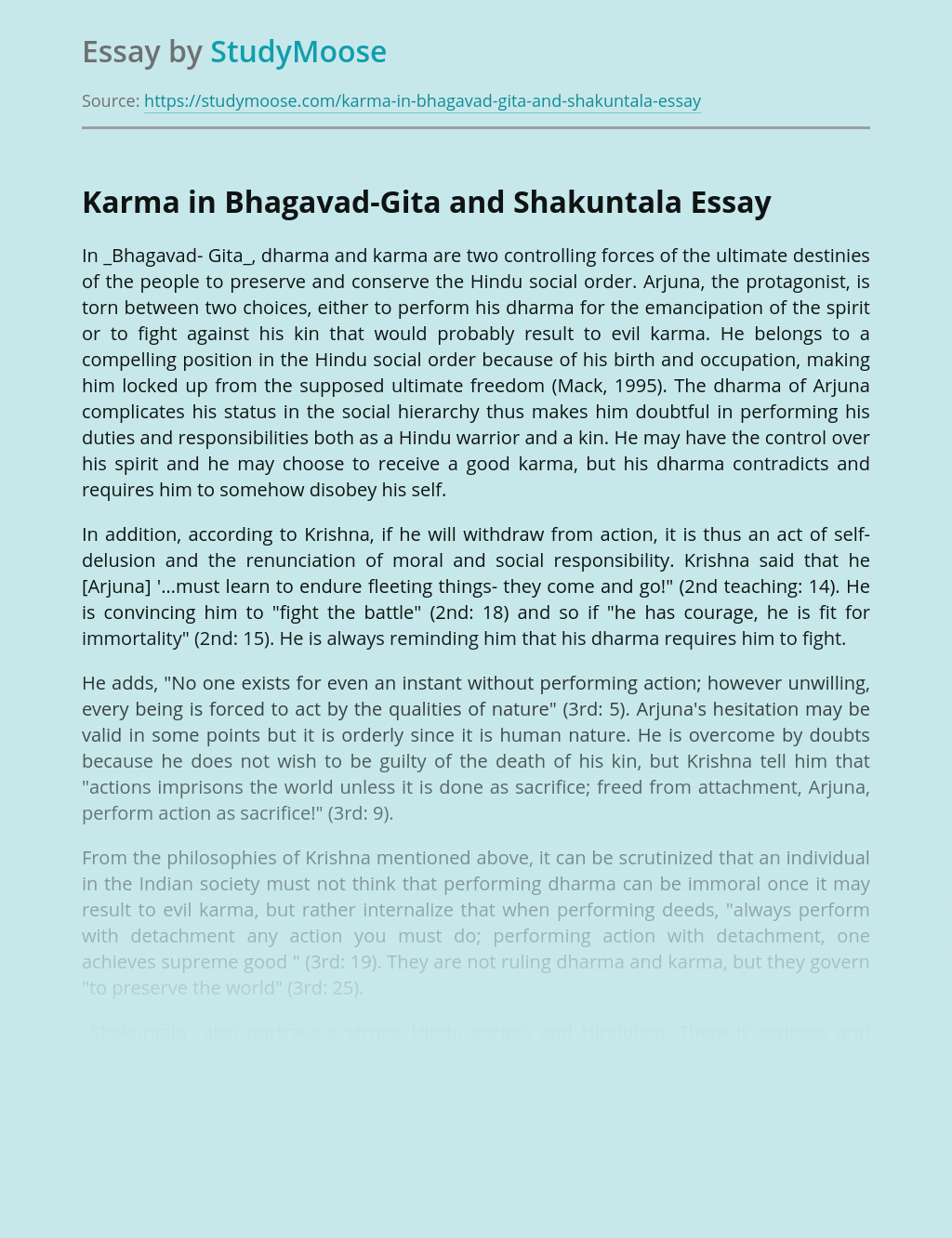