According to “Karla Homolka: Child Rapist, Torturer, And Killer” (2013), Karla Homolka was one of Canada’s most infamous female convicts. Karla and her husband Paul Bernardo were responsible for raping and murdering young girls in Canada. Her husband Paul was known and the “Scarborough Rapist. ” She and her husband raped and murdered five young girls, one of which was Karla’s younger sister Tammy. Karla called Paul her “King” and did anything and everything he asked her to do; including, drugging her own sister so he could rape her.

Her sister choked on her own vomit and ultimately died the same night. Karla served 12 years in Canadian prison for the rape, torture and murder of these young girls. Karla, whom Paul battered and controlled, was at the service of her husband day after day, night after night, doing anything and everything he told her to. She wanted to please her husband, because she loved him so much. “She loved Paul very much.

Karla was the oldest of three other siblings who were, “well adjusted, pretty, smart, popular and received ample love and attention by friends and family” (“Karla Homolka- Child Rapist, Torturer And Killer”, 2013). Karla formed a liking for animals while she was in high school. After high school, she went to work at a veterinary clinic. At the young age of just 17, Karla attended a pet convention in Toronto, and met Paul Bernardo, who was 23 at the time.

Bernardo was blonde, and very attractive.

She and Bernardo were intimate on their first night together. They both quickly concluded that they were meant to be due to their sad-masochistic desires. Bernardo became the master and Karla, quickly became the slave, wanting so badly to fulfill Bernardo’s fantasies (“Karla Homolka- Child Rapist, Torturer And Killer”, 2013). Karla Homolka along with her husband, Paul Bernardo raped and murdered at least five women. Their first victim was Homolka’s younger sister, Tammy. Paul Bernardo had a fantasy of being with a virgin. When he and Karla got together, Karla was not a virgin.

Paul convinced Karla that she needed to give her younger sister to him as a gift so they could keep their love alive. Karla stole animal anesthetic from the veterinary clinic to drug her sister. On December 23, 1990, Paul and Karla were at a Christmas party at the Homolka family home, where they served tons of drugged, alcoholic beverages to Karla’s younger sister Tammy. After the family retired to their rooms, the two took Tammy to the basement and Karla held a cloth soaked in the animal anesthetic over her baby sister’s mouth while Paul raped her.

During the rape, Tammy began to choke on her own vomit and died ultimately. The drugs in Tammy’s system were undetected during the autopsy and the death was officially ruled an accident (“Karla Homolka- Child Rapist, Torturer And Killer”, 2013). Over the next few years Paul and Karla were unscathed by the death of Tammy. Paul blamed Karla for Tammy’s death and said she was no longer sexy to him and that he would not enjoy her sexually anymore. Paul and Karla raped and murdered four more teenagers over the course of the next few years.

Paul and Karla married June 29, 1991, the same day that the body if Leslie Mahaffy was found by a couple canoeing on the lake. Mahaffy was the couple’s latest victim and over a course of four days she was raped and tortured, then murdered. Paul cut up her body into pieces, encased the pieces into cement and dumped them in the lake (“Karla Homolka- Child Rapist, Torturer And Killer”, 2013). It can be concluded that both of these people, Paul Bernardo and Karla Homolka were absolutely crazy. This woman helped rape and torture and kill five innocent girls, one of which was her own little sister.

The cause of criminality was definitely psychological. The two of these people enjoyed doing what they did to these young girls. They fantasized about it. Paul Bernardo didn’t just rape these five girls he was also the Scarborough Rapist. He raped young girls in the Scarborough area and got away with it until 1993, when a positive DNA match showed him as the prime suspect(“Karla Homolka- Child Rapist, Torturer And Killer”, 2013). Karla Homolka’s cause of criminality definitely had to be psychological.

Regardless of whether her husband abused her or forced her, she would do these horrific things to these young girls for no reason; simply because her husband wanted them. That to this writer is crazy. Also, there were several other factors that make it believable. Before the killing of Tammy Homolka; when Paul and Karla would be intimate, they would fantasize about him being a rapist and he would make Paula get on her knees and beg him to do “torturous” things to her. It can be concluded that Karla Homolka was labeled with the diagnosis of psychopathy.

She fantasized about the raping and torturing that she and her husband subjected these innocent girls to. Not only did she do those things, but she never reported it until after her husband started beating on her. The only logical conclusion is that she was indeed crazy. How can someone rape and torture their own sister and then go to her funeral knowing what happened and knowing that they were the cause of their sister’s untimely death. Furthermore, she and her husband Paul did this not once, not twice, but five times, before getting caught. Yes, Karla Homolka should be diagnosed as a psychopath. 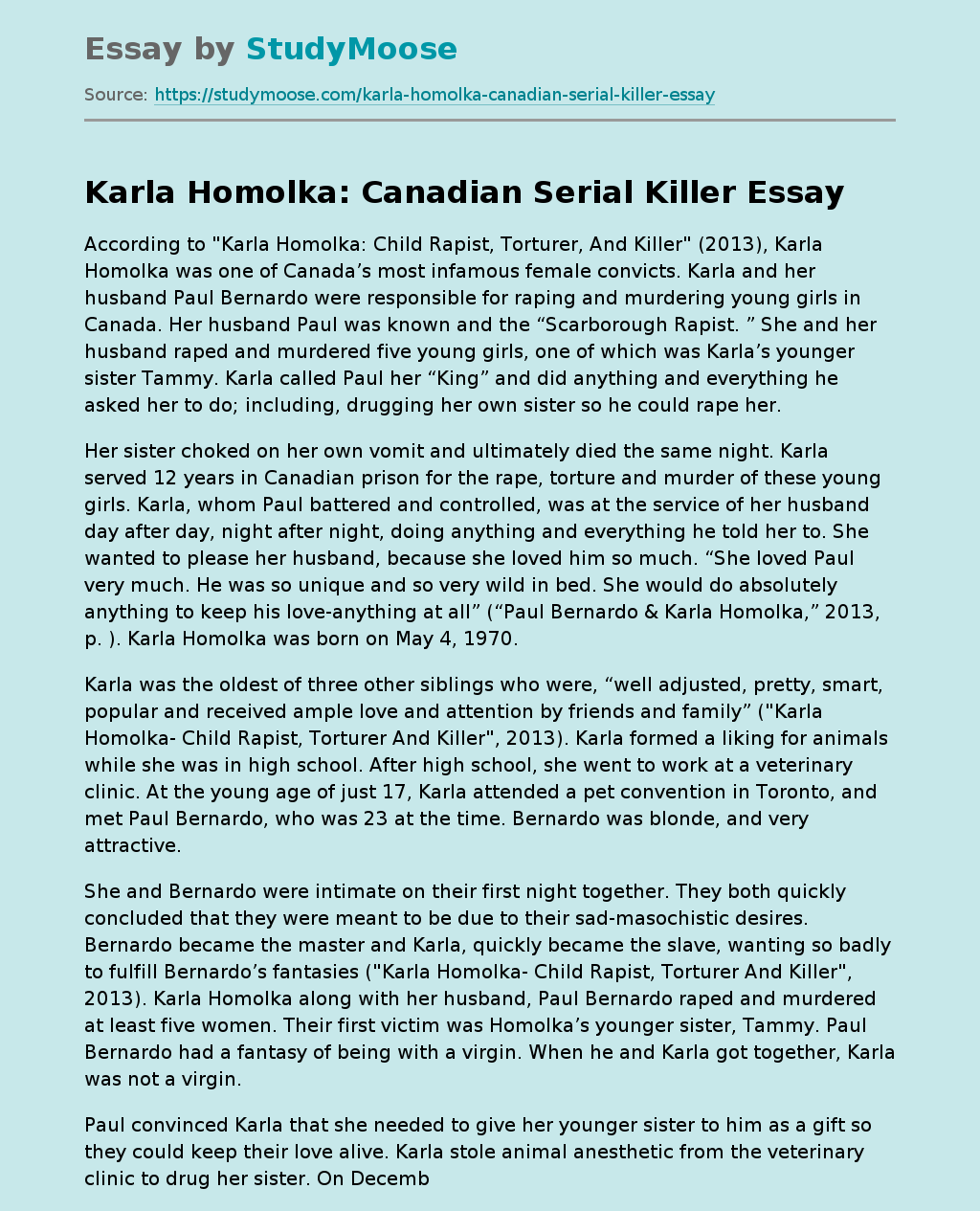