Kamkhya Temple a Pearl of India

The Kalika Purana, an ancient work in Sanskrit describes Kamakhya as the yielder of all desires, the young bride of Shiva, and the giver of salvation. Shakti is known as Kamakhya. The Kamakhya Temple, which is situated high up on a hill called Neelachal Parbat or Kamagiri in the city of Guwahati, is one of its several religious landmarks, which speaks volumes about the rich historical treasure over which the state of Assam is settled. This sacred temple in the heart of the capital city of Assam holds more than it meets the eye of the spectator.

Don't use plagiarized sources. Get your custom essay on
“ Kamkhya Temple a Pearl of India ”
Get custom paper
NEW! smart matching with writer

The Kamakhya Temple had been built in admiration to Goddess Kamakhya or Sati, who was one of the numerous incarnations of Goddess Durga or Goddess Shakti.

The temple is situated a few kilometers away from the Guwahati Railway Station, and is open for visitors throughout the year. The exact date of the original temple is not known. It is believed that, the temple is an ancient temple.

The Temple was rebuilt in 1665, after being destroyed by Muslim invaders. It was probably an ancient Khasi sacrificial site, sacrifices are still very much part of worship here. Group of devotees arrive each morning with goats to offer to Shakti. Although little is known about the early history of the temple, the first reference to the place has been traced back to the Allahabad inscriptions of Emperor Samudragupta.

There is a legend attached to the history of the temple, which goes way back to the mythological age.

According to the legend, Sati the wife of Lord Shiva (one of the holy Trinities in Hindu mythology) took her life at a `Yagna` ceremony that had been organized by her father Daksha, because she could not bear the insults hurled at her husband by her father. On hearing the news of his wife`s death, Shiva, the destroyer of all that was evil flew into a rage and punished Daksha by replacing his head with that of a goat. Torn between misery and blind fury, Shiva picked up the corpse of his beloved wife Sati and performed a dance of destruction called the `Tandava`.

The intensity of the destroyer`s fury was so overwhelming that it took several Gods to pacify his anger. In the midst of this struggle, Sati`s corpse accidentally got cut into 51 parts by the disc in the hands of Lord Vishnu (also one of the Trinities in Hindu mythology), and her female genitalia or `Yoni` fell on the spot where the Kamakhya temple stands today, forming one of the many Shakti `Peethas` adorning the rest of her body parts. But the place where her uterus fell was not known till the god of love, Kamadeva, searched it out to rid himself of a certain curse of Brahma`s. Kama regains his body here. The place came to be known as `Kamarup` and the presiding deity as `Kamakhya` or one worshipped by Kama.

Another legend says that the demon Narakasura fell in love with Goddess Kamakhya once and he wanted to marry her. But as a goddess cannot marry a demon or asura, Goddess Kamakhya played a trick to save herself. She laid a condition that she would marry him only if he builds a temple for her within one night. Narakasura agreed to it and almost finished building the temple overnight. This scared Goddess Kamakhya and before the final steps of the temple were completed, a cock was sent to cry cock-a-doodle-do to announce the arrival of the morning, before it was actually dawn. This made Narakasura very angry and he killed the cock on that spot. But according to the condition Narakasura couldn`t marry Goddess Kamakhya after that. It is said that the present Kamakhya temple is the same that Narakasura had made for the Goddess.

Still another Legend says that Shakti, the mother Goddess, challenged the supreme creative power of Bhrahma and that Brahma could thereafter create, only with the blessings of the Yoni, as the sole creative principle. After much penance, Bhrahma brought down a luminous body of light from heaven and placed it within the Yoni circle, which was created by the Goddess and placed at Kamarupa Kamakhya in Guwahati.

King Nara Narayana of Cooch Behar rebuilt the temple in 1665 after it had suffered destruction at the hands of foreign invaders. The temple consists of seven oval spires, each topped by three golden pitchers, and the entrance spirals down to a curvy path of some distance, which specially links the main road to the temple. Some of the sculptured panels of the temple carry depictions of Gods and Goddesses of Hindu pantheon carved in a delightful pattern. Tortoises, monkeys, and large number of pigeons have made the temple their home, and loiter around the premise, being fed by the temple authorities and the visitors. The cryptic, as well as the peaceful ambience of the temple combine together to soothe the nerves of visitors, and take their minds to flights of inner salvation, and this is the very reason that people come here for. Images of gods and goddesses of Hindu religion are carved on the walls. The image of the Goddess along with other deities is kept on a throne.

The current temple structure was constructed in1565 by Chilarai of the Koch dynasty in the style of medieval temples. The form of the earlier structure, destroyed by the Kala Pahar, is unknown. The temple consists of three major chambers. The western chamber is large and rectangular and is not used by the general pilgrims for worship. The middle chamber is a square, with a small idol of the Goddess, a later addition. The walls of this chamber contain sculpted images of Naranarayana, related inscriptions and other gods. The middle chamber leads to the Sanctum sanctorum of the temple in the form of a cave, which consists of no image but a natural underground spring. The spring emanates from a fissure in a large rock that symbolizes a Yoni. In summertime the water runs red with iron oxide resembling menstrual fluid, an occasion for the Ambubasi festival. Though the temple is aligned facing east like most Hindu temples, the worship of the yoni is performed facing north.

The Kamakhya Temple has a beehive like shikhara. Some of the sculptured section seen here are of interest. There are images of Ganesha, Chamundeswari, dancing features etc. The temple is a natural cave with a spring. Down a flight of steps to the bowel of earth, is located a dark, mysterious chamber. Here, draped with a silk sari and covered with flowers, is kept the “matra yoni”. There is no image of Shakti here. Within a corner of a cave in the temple, there is a sculptured image of the Yoni of the Goddess, which is the object of reverence. A natural spring keeps the stone moist. Other temples on the Neelachala hill include those of Tara, Bhairavi, Bhuvaneswari and Ghantakarna With all its enigmatic splendor and picturesque locale, the Kamakhya Temple is one of the most astounding structures, not only in Assam, but also in the whole of India.

Durga Puja is celebrated here annually during Navaratri in the month of September- October. It is a three-day festival attracting several visitors. A unique festival observed here is the Ambuvaci (Ameti) fertility festival wherein it is believed that the Goddess (mother Earth) undergoes her menstrual period.

Kamkhya Temple a Pearl of India. (2016, Oct 27). Retrieved from https://studymoose.com/kamkhya-temple-a-pearl-of-india-essay 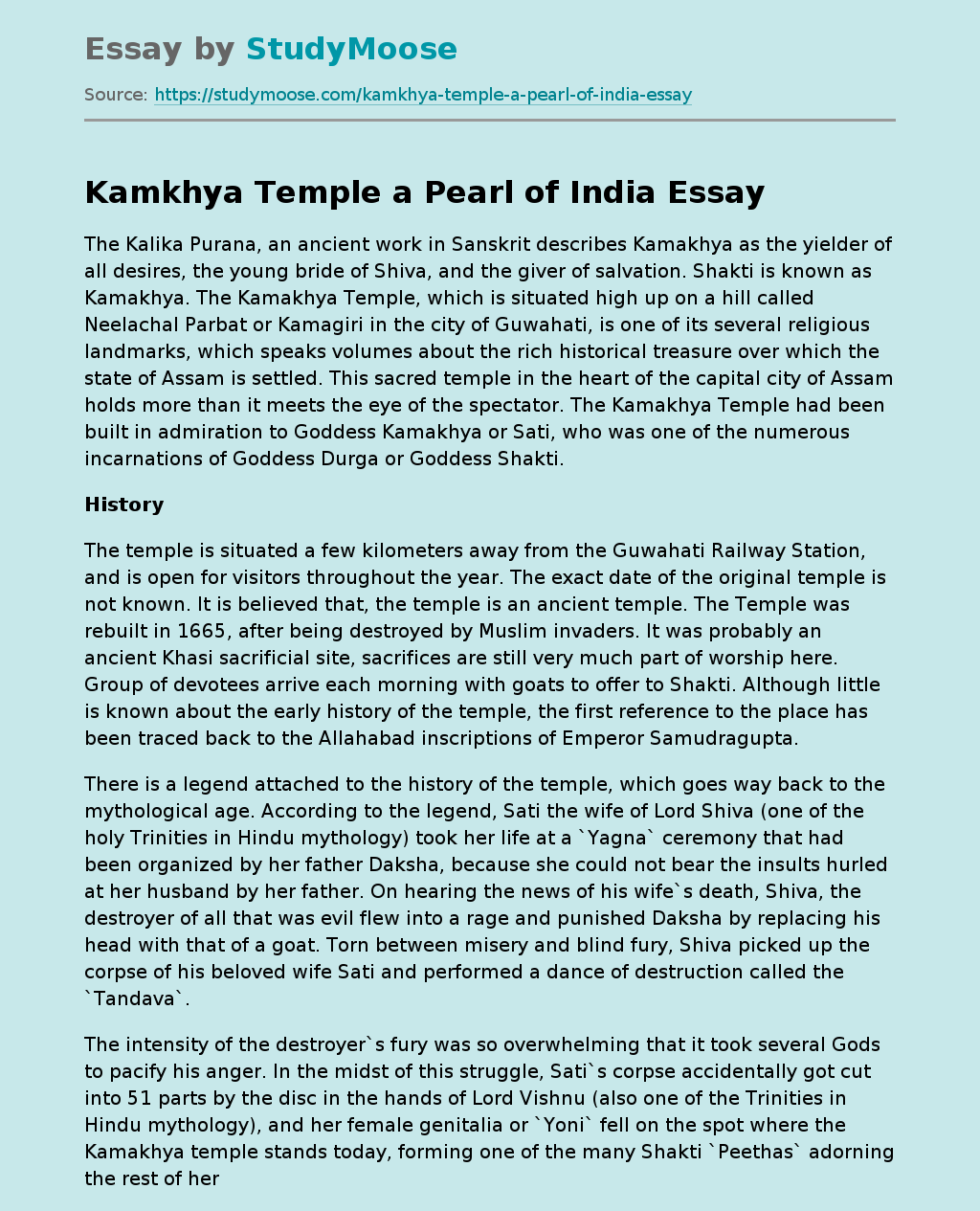