Kafka wrote The Metamorphosis in 1912. It was his most famous publication. He criticizes modernism in society. He experienced fame and popularity with his writings during the Great Depression and political problems of the 1930’s. Kafka used his sense of humor and in some instances told of the anxiety and isolation concerning modernism. People dealt with issues living in alienation from god. Critics remember, even today, the way Kafka’s used sardonic humor with social language in telling stories. Four themes that Kafka used in his novella are humanity, existentialism, modernism and transformation.

Don't use plagiarized sources. Get your custom essay on
“ Kafka’s The Metamorphosis Protagonist ”
Get custom paper
NEW! smart matching with writer

He is left out from human interactions. By reading this, I understand that Gregor believes he is undistinguished and unappreciated. The job he takes helps him to pay his parents debt, but he does not like it. Before he became an insect, he still didn’t think his family ever did understand him. His family notices him and feels he is a complete disgust and disappointment. He has completely lost the love and support families usually have for one another.

Feelings of reproach and vexation. The reason for this, they believe they have been disillusioned by their son, Gregor. He had changed into an ‘it’ (Kafka, 1880-1913).

According to Gregor, he didn’t just lose his physical, human-self, but also to those around him. He lost his identity and discovered he was just an insect, a bug. A small insect in a great big controversial world. “When he awoke thinking he had dreamed a ‘monstrous’ dream, he realized he was facing reality” (Kafka, 1880-1913).

It was real. His transformation clarifies the intolerable nature of the life he was living. Concerning professional life includes a programmed unkindness, antagonists, and not wanting to stray from the normal path. Gregor’s humanity is tested by a distressed ‘insect’ nightmare that ends with his passing. Transforming into an insect or a cockroach is a metaphor for humanity. Kafka questions what constitutes man-kind and how it is defined. When fog is mentioned and is surrounding Gregor’s room, it shows a lack of distinction between what is considered human or not. Now, this is a symbol of mirroring the emptiness and hopelessness of Gregor and the acceptance that he is an insect.

Existentially speaking, he loses human feelings. The sections of his insect body segment the body and the mind. It conveys the concept of human existence. That which was held together was rational, now it being separated is irrational. “He sat unyielding on his picture”, unveiled the hopelessness and vanity Gregor displays as his consciousness is derivatively transformed to an animal and his own existence is characterized by the move of humanity (Kafka, 1880-1913). He lost his aspiration in life with having to pay his parents debt. The author projected that the “protagonist had a desire to escape from human interaction” (Kafka, 1880-1913).

Kafka bared the sentiment along with the wit, in accordance, to what happened. His novella is popular in today’s world. Kafka was a modern influencer. He showcased the “emptiness that can lie at the heart even of a busy life in a crowded city apartment” (Kafka, 1880-1913). With having read Kafka’s The Metamorphosis, he depicts the dissociation and disaffection of modern man. People are often indecisive about freedom and responsibility to both family and society. Guilt resonates from this and in conflicts society faces. When one faces any type or too much conflict, escape is an answer and a way to not come to terms with it. Due to how Sigmund Freud perceived things, he believed that our actions are attributed to our unconscious mind. The growth of the unconscious mind can likely suffer or continue to grow healthy. He locked away himself in his room. There was a conversation Gregor had with his dad, it went something like “Between us there was no real struggle; I was soon finished off; what remained was flight, embitterment, melancholy, and inner struggle” (Kafka 1880-1913).

I understand why he felt feelings of self-loathing. Kafka uses sardonic humor throughout his novel. Human existence and the economical world are muddled. There will always be a fine distinction with what is human and how one is cultivated by Pre-Modernistic concerns, particularly, by the church and the centralize on rationality. 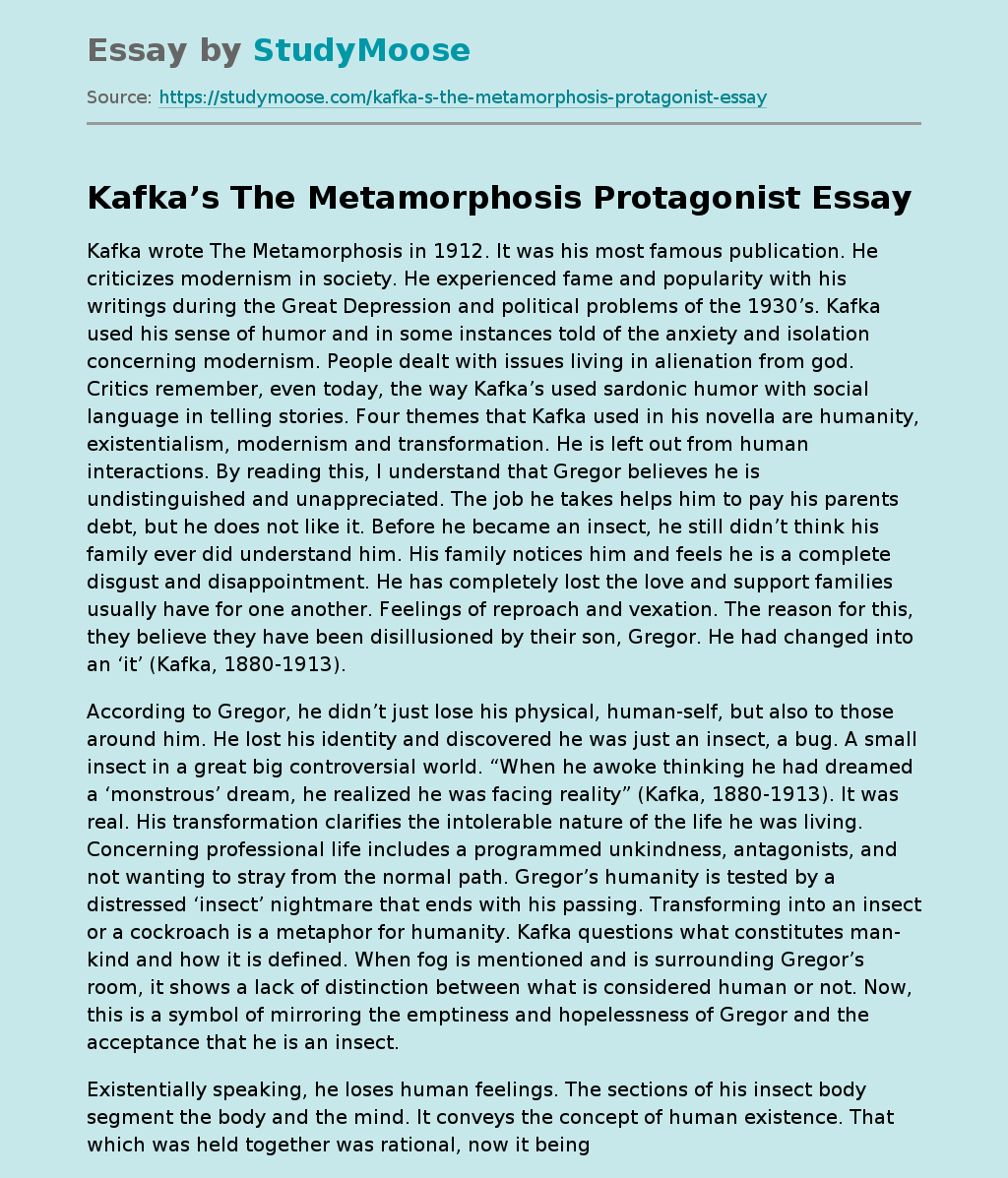