In the juvenile justice system believes in giving a juvenile a second chance, and protects their privacy. They also want to make sure they receive treatment and support services rather than just punishment. The juvenile system focuses more on their needs, and those goals are met with treatment and rehabilitation so they won’t become repeat offenders. After a juvenile completes their program their records can be sealed or destroyed once they reach 18. The juvenile system status in question is to determine delinquency, whether an act of was violated or not.

Don't use plagiarized sources. Get your custom essay on
“ Juvenile Crime Paper ”
Get custom paper
NEW! smart matching with writer

The system also wants to make sure the best interest of the child is taken into consideration, regardless if they are guilty or innocent. For the most part when a child is in custody and pending the hearing, they may be released into the custody of a parent or guardian. Juveniles have closed hearings instead of a trial. The right to a jury does not exist. A juvenile is not arrested; they are taken into custody from an order by the judge or complaint.

Usually juveniles are only incarcerated with other youth offenders and in juvenile facilities. In the adult court system the status question for adults is to determine guilt or innocence. The goal for adult proceedings is to determine offender’s guilt or innocence. Pending a trial, an adult can be released through bail, or on their own recognizance. Adult trials are open to the public, and they also have a right to a jury trial. The trial could last months, and the trial determines guilty or innocence.

Adults are housed with other adult offenders in jail or prison facilities. Adults also have rights to appeal their sentence. Delinquency is the broadest usage, juvenile actions or conduct in violation of criminal law, juvenile status offenses, and other juvenile misbehavior. When my son was a juvenile and got into trouble his crimes made us appear in front of a judge who decided he was a delinquent, and he would remain in their custody until he completed some of the programs that were assigned to him.

At the time I did not understand much about the juvenile court system. That is why this class and course is so important to me. If only I knew then what I know now about the justice system it would have changed the way I handled certain situations that had to do with my son. Status offense is an act or conduct that is declared by statue to be an offense, but only when committed by or engaged in by a juvenile, ad that can be adjudicated only by a juvenile court. Oklahoma County Juvenile Justice Center in Oklahoma County has developed a Community Outreach Prevention Program to assist the community and schools on the topics of Bullies and Weapons. The program want to bring awareness to the community and schools about the effects of Bullies and Weapons.

The staff consists of employees from the Juvenile Bureau who work with youth in the Detention Center and in Probation Services. The presentations are age, and audience appropriate. The Mission of the Juvenile Bureau is “To Work with the community to Prevent and Control Juvenile Delinquency.” The Juvenile Court Era was a time when children’s needs were recognized, and it led to legislation requiring juveniles to have separate hearings than adults. Later it was also thought juveniles should not have contact with adult offenders. Soon this became the model for juvenile court status throughout other states.

A juvenile court was created and they applied the word delinquent instead of using criminal to juvenile offenders. The judges were expected to serve as advocates for juveniles while guiding their development. In 1938, the federal government passed the Juvenile Court Act, which embodied many of the features of the Illinois statue. By 1945, every state had enacted special legislation focusing on the handling of juveniles, and the juvenile court movement became well established. There were five philosophical principles that were summarized. (Schmalleger, 2011).

1. The state is the parent of the children.
2. The children are worth saving without harsh treatment.
3. Children should be nurtured
4. Their goal plan should be individualized just for them.
5. Noncriminal procedure are necessary to give primary consideration to the needs of the child. There are several categories of Children in the Juvenile Justice System. Theses categories are still used today in most jurisdictions to describe the variety of children subject to juvenile court jurisdiction. 1. Delinquent children are those who have broken the criminal law. 2. Undisciplined children would be when the child is out of control. 3. Dependent children usually have no one to care for them like a parent. 4. Neglected children are those who do not receive proper care from their parents. 5. Abused children are those that suffer abuse from the very person that is suppose to be taking care of them. 6. Status offender embraces children who violate laws written only for them. I want to talk about the Homicide rate among juveniles. According to the FBI’s Supplementary Homicide Report: 1980-2010, and it provides access to more than twenty years of national and state data on homicide victims and known homicide offenders.

Until I completed some research on juvenile crime I had not realized how much crimes were committed by our youth. This has been going on for a very long time, and I don’t think people realize the impact of crime on youth today. These statistics were really heart breaking. I am really glad I chose to get a degree in this field, because in some way I would love to make a difference. With statistics like this It makes me wonder why we have so many juvenile offenders that continue to commit crimes after they have reached adulthood. I do not believe that juveniles should be housed with adult offenders. I believe our youth still have a chance at life, and they should not be blinded by a corrupt repeat offender adult. I think if given the chance adults would try to take advantage of a child to the point of rape, bribery, joining gangs, committing more crimes, and become career criminals.

I would say our children are our future, and not giving up on them is the key to success. When a juvenile gets into trouble some people are so quick to just write them off. Having juveniles incarcerated with adults is like throwing them to the wolves whatever could happen usually does happen. Adults that have been incarcerated for some time prey on new young fish. They are looking for someone to keep them satisfied by any means necessary. In order for our youth to become productive individuals in society we have to provide the education and the tools that are needed. When a juvenile commit a crime we should first look at why the crime was committed, was it due to neglect, abuse, or something like that.

Then when we figure out what the problem is rehabilitation can be created to reform the juvenile offender, and provide the necessary skills to help them in the future. When juveniles are given a sentence, and they have to be incarcerated for an extended period of time they lose contact with family members and friends. Some parents try to be there for their children however they leave them in there to do for themselves. Some parents feel that will teach the juvenile a lesson about getting into trouble. 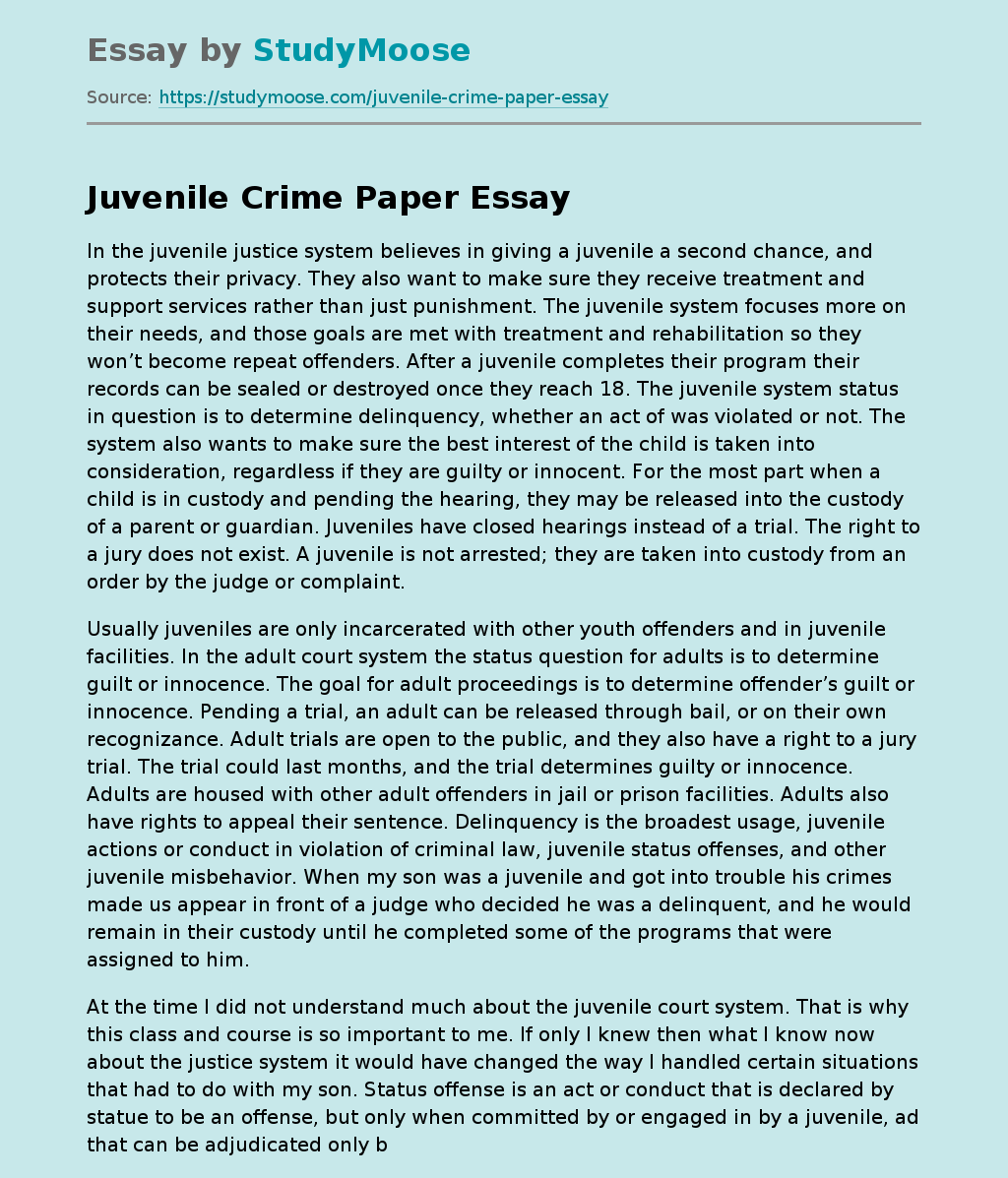