Justice System in a Tale of Two Cities

It is no secret that, in a Tale of Two Cities, Dickens constantly critiques the English society. In chapters two and three he focuses on critiquing the justice system. By using various language strategies including juxtaposition, and the lack of quotation marks, Dickens comments on the ridiculousness of the court.

Dickens’s use of juxtaposition is evident when he describes Charles Darnay as “a false traitor to our serene, illustrious, excellent, and so forth” (Dickens 65). He uses many formal and descriptive adjectives followed by “and so forth”, which is informal and vague.

Don't use plagiarized sources. Get your custom essay on
“ Justice System in a Tale of Two Cities ”
Get custom paper
NEW! smart matching with writer

The informality of these words reflects the barbarous actions of the crowd. The crowd craves entertainment and information so much that, “people paid the see the play at the Old Bailey, just as they paid to see the play in Bedlam” (Dickens 63). Dickens demonstrates his animosity for the English judicial system by showing the reader the cruelty of the people.

In chapter three there is a noticeable lack of quotation marks even when the characters are speaking.

“Had he ever been a spy himself? No, he scored the base insinuation. What did he live upon? His property” (Dickens 69) is just one example. This absence reflects how in the English court people aren’t really heard. The “prisoner” has almost no opportunity to defend himself and is always guilty until proven innocent. The people are so positive that the prisoner will be convicted that they will even venture to say “‘Oh! they’ll find him guilty. Don’t you be afraid of that’” (Dickens 63).

It is evident through his writing that Dickens believes that this is not the way to run things. He believes that people should be judged fairly.

In using these language devices, Dickens conveys his opinion about the judicial system in England. He assesses the situation and works to convince the reader that the traditions need to be trained.

Justice System in a Tale of Two Cities. (2021, Nov 24). Retrieved from https://studymoose.com/justice-system-in-a-tale-of-two-cities-essay 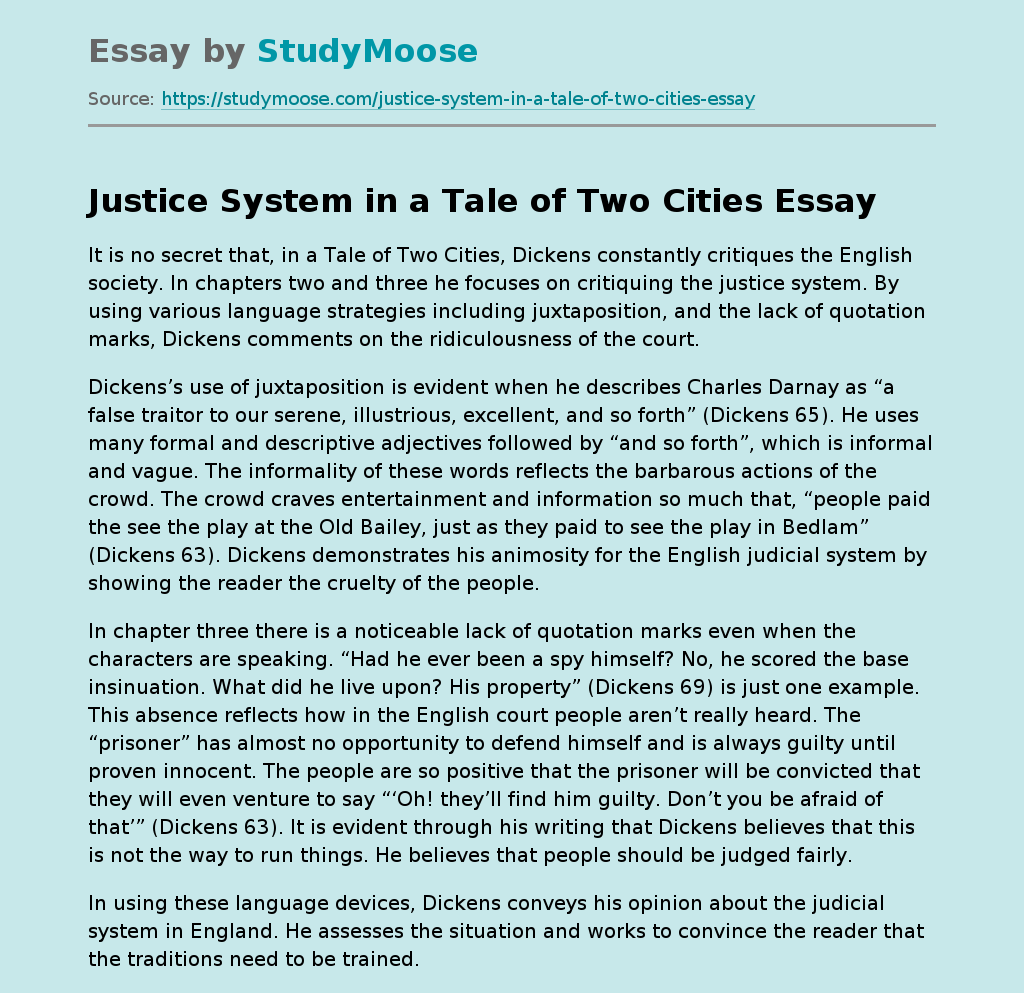