Justice in The Plain Sense of Things

In Stevens’ poem “The Plain Sense of Things” the first thing the reader notices is that there are five equal stanzas. The poem is neatly constructed so that each stanza contains four lines. This creates an organized, orderly look to the poem, and gives off the idea of being in control because of the form. After further examination of the poem, the reader discovers the gloomy nature of the poem. Another interesting feature is the length of the poem. The poem contains twenty lines, a short poem, as though to symbolize how short life truly is.

Don't use plagiarized sources.
Get Your Custom Essay on Justice in The Plain Sense of Things Just from $13,9/Page

It may also possibly be a symbol of mortality, and how everything must come to an end at some point. Stevens obviously takes great care in creating this poem.

Stevens seems to be informing the reader of the grim reality of life. Stevens is taking the reader on a narrative poem (possibly comparable to Frost). Stevens makes reference to the falling of the leaves which denotes the ending of a season.

The ending of fall is seen with the beginning of winter which is associated with death. His poem is also filled with a variety of negative and empty words. For example, “fallen,” “end,” “inanimate,” “inert,” “blank cold,” “sadness,” “without cause,” “lessened,” “badly,” “old,” and “failed” are stated just within the first three stanzas (or twelve lines). These words are negatively associated; they cause the reader to be aware of life dwindling away. As well as the negativity attached to these words, there is also a vast amount of vagueness to them. These words are not specific, detailed, or descriptive.

Stevens has described life in a descriptive yet sad tone just within the first three stanzas. Life has been reduced to a fifty year old chimney that slants, a failed effort, and “a repetitiousness of men and flies” (1901). When Stevens refers to the failed effort, I believe, he is referring to people as a whole have failed in life. People have moved away from religion and morals, and, although they have made an effort to rectify their wrongs, they’ve failed. Perhaps the greenhouse is even a reference to the House of the Lord (churches, temples, etc.), and the paint needed is the need for a revival in our religious beliefs and morality.

In the final two stanzas, Stevens has unleashed his rawest thoughts and emotions. I think he is referring to the absence of morals, justice, and the Lord in our lives. He speaks of “the great pond” which could be a reference to Heaven, or the Lord, and how we see it reflected, dirty and muddy. The glory of our salvation has been tainted by our evil ways, the water has been polluted, and our hopes for being saved are beginning to diminish. By the end of the poem, Stevens appears to be hopeless about the future. We can only imagine a time when salvation is within reach, a time when the pond is not muddy, a time when morals and the Lord comes first, a time when live is valued. Stevens appears to state that it is inevitable that the water becomes cloudy, that Heaven becomes further away, and the idea of a glorious afterlife with the Lord is tainted.

Justice in The Plain Sense of Things. (2016, Jun 25). Retrieved from https://studymoose.com/justice-in-the-plain-sense-of-things-essay 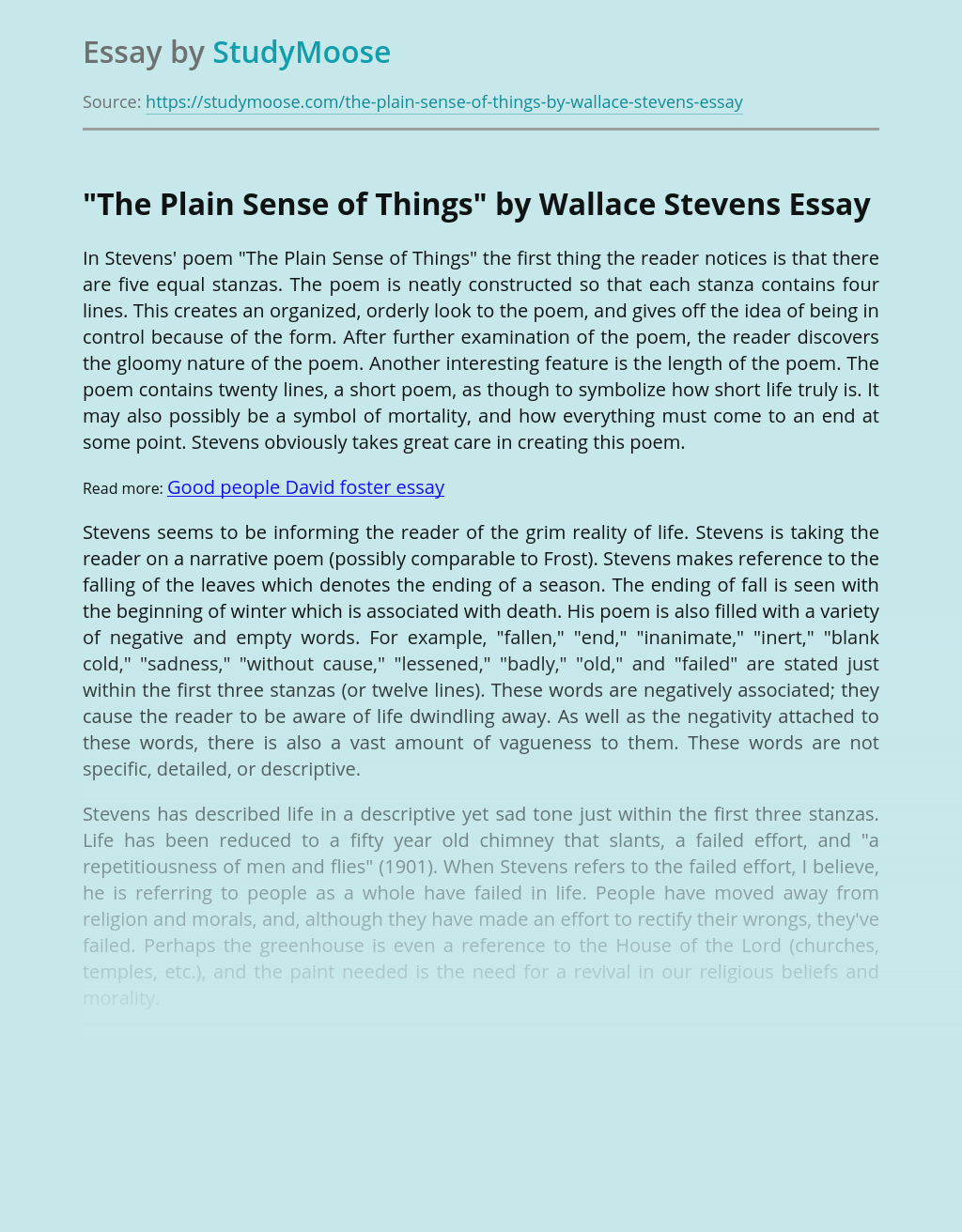 My Son Changed My Life

Before my son had arrived, I was in complete shambles. My life was spiraling down a one way tube into darkness. I had become everything that I had only wished I wouldnt. I was known as nothing better then “white trash”. I thought that I had it all. I was only 17 and I was...

Life cycle costing involves evaluating the costs related to ownership, operation, maintenance and disposal of project facilities. BusinessDictionary. com (2010) defines life cycle costing as the Sum of all recurring and one-time (non-recurring) costs over the full life span or a specified period of a good, service, structure, or system. It includes purchase price, installation...

Get Essay
Happy moment in my life

Social media network are becoming progressively essential in college as the format of course delivery modifications to consist of hybrid and online designs, and as the social media provides trainees a way to stay in touch, developing in person like discussions and other interactions far from the physical class. From this perspective, social networks are...

A lot happens within our environment. It may be hard to believe but yet true that the life orphan children live is of big challenge. I fail to know why it happens in such a way that after the parent(s) pass away, their children start testing the wrath of their death, as these people who...

Task: “Willy Loman is in many ways foolish and objectionable, and yet he still commands our sympathy and even our respect.” How far do you share this view of Willy Loman? In your response, you should consider how an actor might interpret the role of Willy. Willy Loman is the main character of “Death of a...