Sharad Haksar’s Just Do It is part of his very moving series of pictures he calls “Brand Irony. ” This series portrays ironic juxtapositions of world-renowned brands combined with interesting visuals. In this specific picture, Haskar shows Nike’s famous Swoosh accompanied by its “Just Do It” slogan on a wall acting as an advertisement somewhere in India. On the wall next to the ad, a young boy is urinating as a little dog looks on. At first a feeling of excitement comes over the viewer because of Nike’s large media presence and its ties to athleticism.

Don't use plagiarized sources.
Get Your Custom Essay on Just Do It Just from $13,9/Page

The boy urinating next to the slogan seems to then invoke a feeling of humor. These emotions soon give way, however, to a much deeper and serious analysis. Soon enjoyment and wittiness turn into anger and sadness as the details of the image slowly come forward. Born in India, Sharad Haksar was probably accustomed to seeing this kind of situation day in and day out.

For this reason, Haksar was surely biased in the way that he definitely had some kind of disgust with companies like Nike. He is trying to appeal to the same audience Nike would be trying to attract in their advertisements.

This would be, for the most part, young and active people anywhere from the ages 15-40. More than that, he is also trying to appeal to anyone who has an interest in photography, advertising, and the worldwide problem of worker exploitation. He finished up his collection of photos entitled “Brand Irony” in 2006. These photos were meant to show big-market companies advertising in ironic situations and/or places. In this specific photo, his frustration with large corporations exploiting their workers seems to be the focal point.

Nike is a world –power when it comes to brand imagery, and their “Just Do It” slogan is as recognizable as any. By combining the first glance humor of a boy urinating on a wall, with the more profound message hidden deeper inside the photo, Haksar creates a brilliant image that begs to be understood. Many human beings see Nike as a model company, one that is always progressing its craft, and constantly trying to better its products. Haksar realizes this, and he wants to shed some light on the other side of the business.

He wants to show how huge commercial businesses like Nike affect the countries and communities in which they conduct their trades. Nike has been at the forefront of “sweatshop” controversy in India, and the dirty and grimy background of the image appeals to this controversy. The “Just Do It” slogan, rather than being the upbeat, creative influence it usually is, is now portrayed in a much darker light. In Indonesia alone, 30% of factory workers were reported as being verbally abused, with another 2. 5% experiencing “unwanted fondling” (Dukcevich).

In Honduras, two Nike subcontractors closed down their plants, pushing 1,800 natives out of work. It didn’t stop there, though. In complete disregard for Hondurian law, they refused to pay the $2 million in severance that was rightfully owed. Nike’s “factory to factory” competitiveness creates “an ultra-competitive environment that drives down wages and gives factory owners virtually no choice but to disrespect workers’ basic rights” (Greenhouse). The motto “Just Do It” is supposed to cast anger over the viewer, as it is clear that this is not an option to these people; life will never grant them the chance to just do it.

Haksar is trying to bring awareness to the poverty-laden countries that big companies exploit to inexpensively run their large factories. He is trying to show that these disadvantaged humans slave over products that they cannot and probably never will be able to afford. This underprivileged boy and the rest of this community are living a life that doesn’t allow them to “Just Do It,” the opportunities just aren’t there. They lead a life of struggling to survive on insufficient paying jobs, some even as factory line workers in one of Nike’s 1000 factories worldwide.

It is not unusual for these workers, most of the time women and children ages 10-24, to work 13-hour shifts and come home with a meager $1. 60. This fact becomes staggering when one takes into account that the average minimum living wage in most of the third world countries that house Nike factories is somewhere around $3. 00 to $5. 00 a day (Braddock). Exploited workers in these factories have no chance of living any kind of lifestyle Nike promotes, but rather become the impoverished human beings that are the face of third-world countries around the globe. The boy in the picture that at first seemed so comical is in fact without hoes or a shirt.

He is clearly indigent and the littered ground he stands on emphasizes this. A sense of pity is immediately taken up for the boy, as he cannot even afford to put a pair of shoes on his feet, let alone the ones Nike advertises. Then the focus shifts to the dog. The dog that at first seemed cute and harmonious prancing next to the boy, now seems ragged and undersized. As the powerful, commenting images slowly unfold from Haskar’s photo, the picture transforms from just an advertisement to a much more critical view of Nike’s world-power franchise.

He is trying to invoke a sense of guilt and remorse in his audience for their participation in buying Nike’s products. Moreover, a sense of anger is supposed to be instilled in the viewer, caused by Nike’s insistence on advertising in countries where just a miniscule part of the population has the means to buy their products. In this sense, Haksar is appealing to his audience to recognize where and how Nike’s products are being made. The innovation in brand imagery Nike has brought to the commercial world is unparalleled.

The Swoosh and the “Just Do It” slogan are reminders that Nike sits in the top of its class when it comes to advertising. Sharad Haksar’s stunning Nike image in his “Brand Irony” series is a comment on this advertising and also an insight into how the products they market are produced. The image comes off, at first, just to be a humorous depiction of a boy urinating on a wall, but in fact is trying to shed light on the cruel and inhumane ways workers are exploited by companies like Nike. What the general public sees is Nike’s innovation and their leadership in their industry. What they don’t see are images like this. 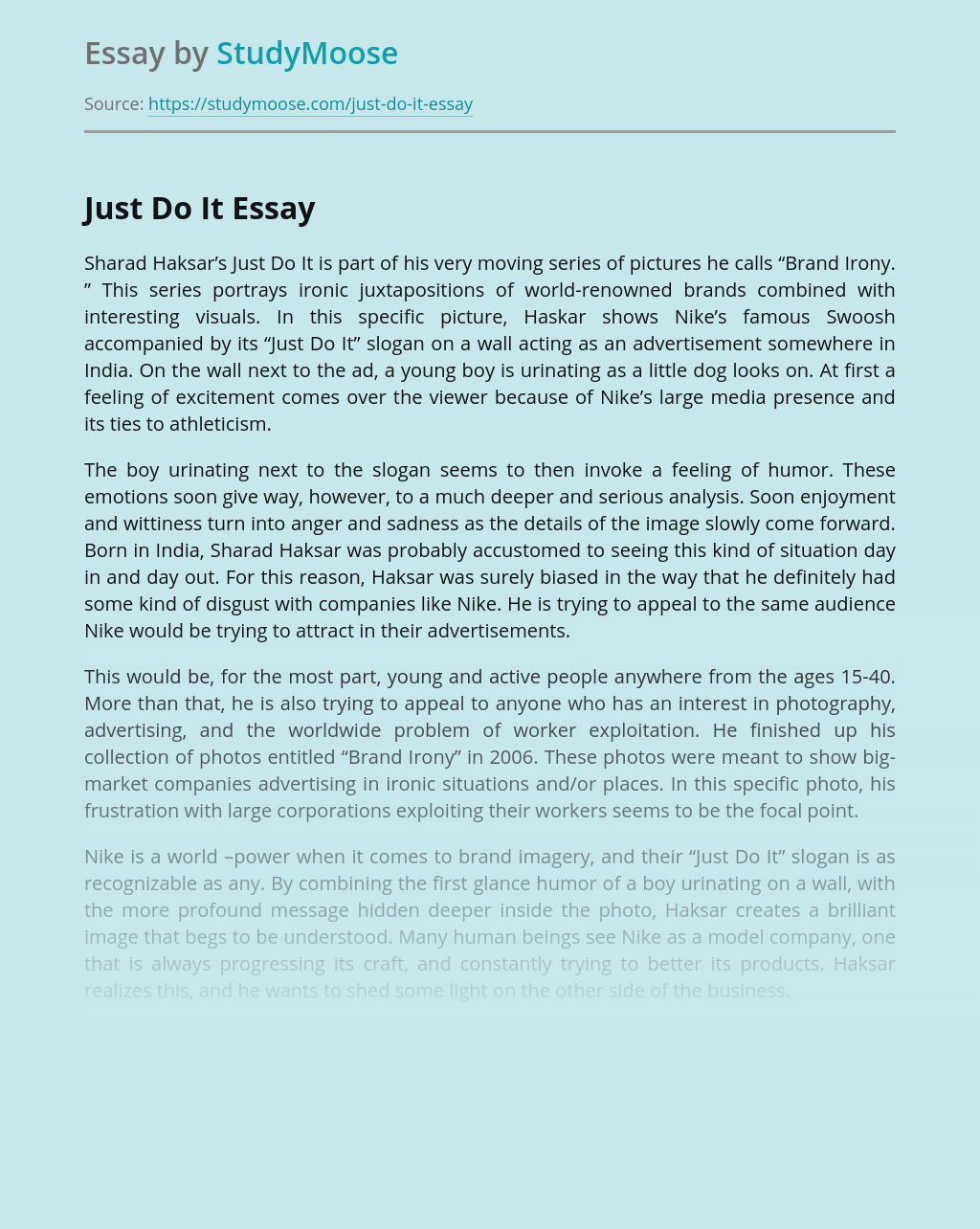 In the past few years so many lives have been lost due to guns in the hands of the wrong people. There have been many debates weather or not the United States should have stricter gun laws. Due to recent tragedies like the shooting in Newtown Connecticut there should be limits to the second amendment...

The Good the Bad and the Ugly

It is undeniable that films are essential part of our normal existence. The world of movies presents us with positive emotions and feelings of other reality. Perhaps, it sounds brutal but they substituted literature in a big extent; young generation is used to watch movie of major defining genre rather than to read book. Nevertheless,...

In this commentary, we will take a deep look into this poem that Wilfred Owen wrote. In the poem, a group of soldiers are described, and their emotions. Using three guiding questions, this will be an introduction into the way Owen writes his poems. Answering these guiding questions will give the reader the full package...

Details technology (IT) is the application of computers and telecoms equipment to store, obtain, transmit and control information, typically in the context of a business or other enterprise.The term is commonly used as a synonym for computers and computer networks, however it likewise includes other information distribution technologies such as television and telephones. Several markets...

In both “Tune” and “Remember”, Rossetti conveys her own mindsets towards death through blogging about how others ought to treat her death and how she desires to be kept in mind, respectively. She resolves crucial concepts as well as using word choice and the metrical template to paint a clear picture of her perceptions of...