In the film Juno directed by Jason Reitmen the relationship between the main character Juno, and Mark is very important. This relationship helps the viewer learn more about Juno’s journey to motherhood and in each scene we are shown her development to maturity. Juno’s relationship with Mark influences the story line and helps the viewer understand Juno’s character and why Juno makes many of her decisions. The decision she faces is that of a pregnant 16 year old. The way she views her friend, Mark, develops and changes as she matures on her journey to motherhood.

Don't use plagiarized sources. Get your custom essay on
“ Juno by Jason Reitmen ”
Get custom paper
NEW! smart matching with writer

From the beginning of the film Juno has a clear picture of the perfect parent for her child. Mark fits what she is looking for ideally. He is a fun and relaxed man. He is into the same music as Juno, plays guitar and has terrific taste in horror films. When Juno is looking though the penny saver for adoptive parents she says “ I just can’t give my baby to someone who describes themselves as “wholesome.

” I am looking for something a little edgier.” This is when she sees Mark and Vanessa Lorring’s advertisement, which is exactly what Juno, is looking for. When first visiting the Lorring’s Juno and Mark play on his guitars, instantly bonding. Right from the start Mark is Juno’s preferred parent. I learnt through this that at the start of her pregnancy Juno has an innocent idea of parenting.

Juno and Mark’s relationship deepens as time goes on.

From the first time Juno meets Mark she shows an immense interest in him as a Father. She starts finding excuses to go around and see him, dropping in for the slightest reason. As their relationship grows they start watching movies together, ringing each other and recommending songs. At this stage she is firmly of the view that Mark would make a perfect Father for her baby. When talking about Mark Juno says, “It was cool, he is kind of cool.” At this point the audience may be questioning why a man that much older than Juno has so much in common with her, and questioning if Juno’s views on Mark are realistic as Bren does.

The reactions and comments of other characters help Juno to consider her opinions in a different light. When Juno arrives home from Mark’s late at night Brenda is concerned about Juno. “That was a mistake Juno. Mark is a married stranger. You over stepped a boundary.” At first Juno is upset and annoyed about Brenda telling her off and treating her like a child. She reacts like a typical teenager, not seeing what the audience is already questioning, that spending time with Mark is inappropriate. Brenda is acting like a caring and mature parent, which contrasts with how Juno is behaving.

As the movie progresses and Juno gets to know Mark better she realizes that Vanessa may be the stronger parent. From the beginning Juno shows a great interest in Mark and doesn’t pay much attention to Vanessa. When Juno sees Vanessa at the mall playing with a little kid, she realizes how great a Mother she would make. The scene shows Vanessa in a high angle wide shot running around with a young child who is completely engrossed and captivated by Vanessa’s company. We then see a close up on Juno’s face, the director uses this close up to highlight that Juno is fixated on Vanessa with an expression of awe and happiness, at the realization that Vanessa is going to make a wonderful Mother. Because of her love for children, you can see this by her interaction. Juno’s shift in judgment also affects her view on Mark as the attributes she values in a parent start to mature.

Juno begins to realize that Mark may not be the ideal Father for her baby. When visiting Mark, they hang out in his room. The room is full of props such as unpacked boxes symbolizing Mark being unsettled and boxed in. Juno and Mark danced together with song lyrics in the background “all these young dudes” inferring that Mark still hasn’t grown up.

While dancing we see a mid shot, Juno’s tummy is touching Mark and he comments “something’s between us”. Although there is a baby physically between them he is also suggesting there is chemistry and attraction between them. This is when Mark tells Juno he is leaving Vanessa. Juno is furious and this is a turning point in the film as Juno realizes Mark needs to grow up and is too immature to father her child. This is when Juno realizes that Vanessa is certainly going to make a better and reliable parent for her child. I learnt that through her pregnancy she becomes more mature and she begins thinking of her baby’s needs rather than her own.

Juno’s relationship with Mark reflects her maturation from a naive teenager to a responsible Mother. When Juno first becomes pregnant she is looking for a fun relaxed parent. Initially she was impressed by Mark and enjoyed his company. However she was more focused on what she wanted for herself rather than the well being of her baby.

As Juno spends more time with Mark we learn his strengths and weaknesses. Juno matures as a person and realizes Mark wouldn’t be responsible or grown up enough to make a stable Father. When Juno starts realizing this she starts seeing all the positive traits in Vanessa from a maternal perspective. Juno’s development as a person mirrors her physical development in her pregnancy. This is shown in the movie when Juno makes a selfless decision purely for the baby’s welfare and chooses the right parent to bring up her child, while she is in the advanced stages of her pregnancy.

In conclusion Juno’s relationship with Mark changes throughout the film. Those changes reflect the reactions and influences of other characters, & Juno’s personal growth. As Juno progresses to Motherhood her opinions mature and slowly become selfless. By the end of film she realizes who she wants to see bring up her child. 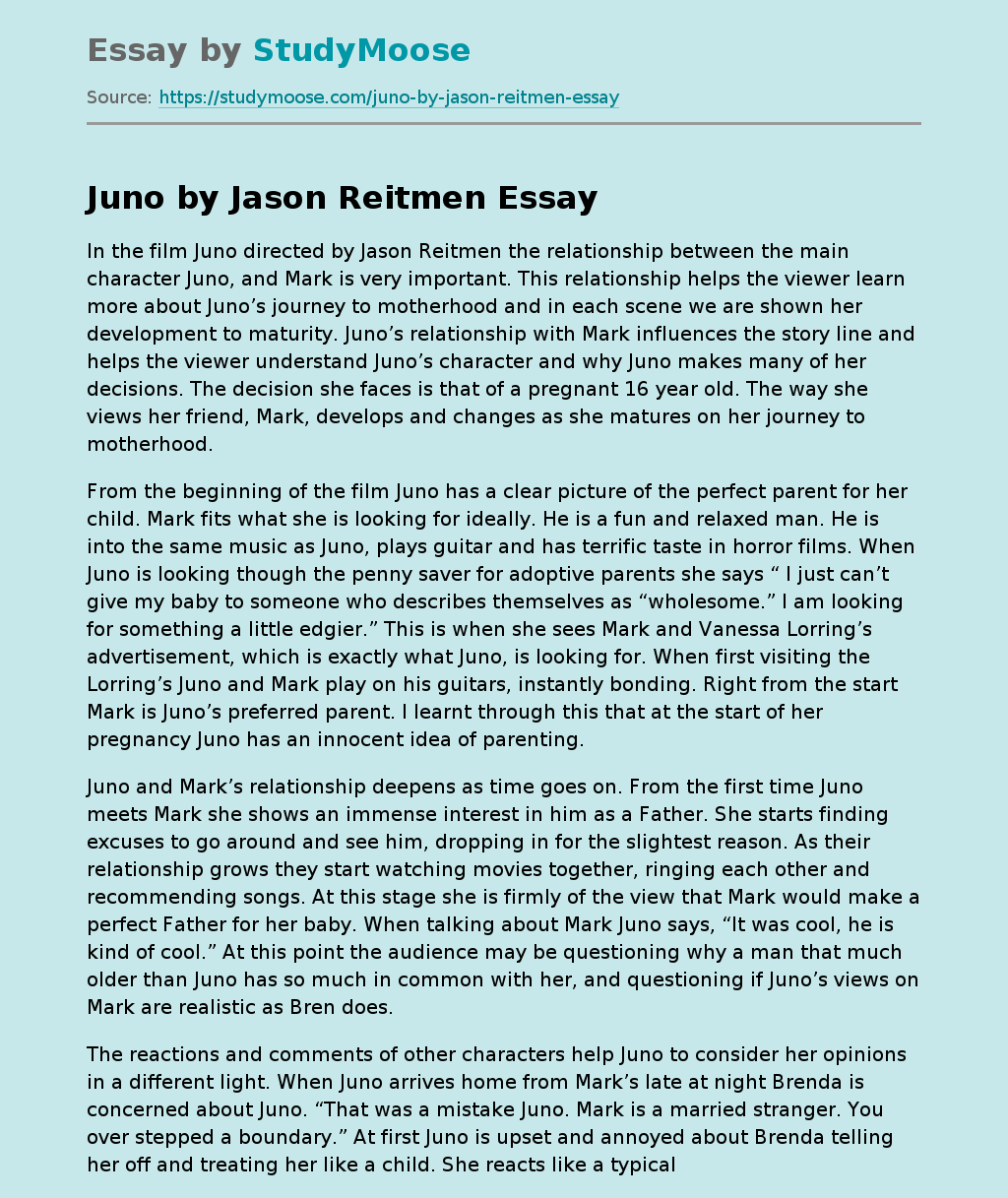