My first adventure time traveling I decided to go to Ancient Rome in approximately the 15th century which was considered the Rome Renaissance. During the time I was there the Renaissance was significant because of all changes overall that occurred. The most significant changes that emerged as a result of the Renaissance I saw was in Europe architecture, art, literature, mathematics, music, philosophy, politics, religion and science. I noticed these fields flourished during the time frame of the Renaissance and led to many people questioning long held beliefs about each.

Don't use plagiarized sources. Get your custom essay on
“ Journey to Ancient Rome and Rome Renaissance ”
Get custom paper
NEW! smart matching with writer

This created an environment of discovery and curiosity in which new ideas were constantly being introduced and tested. Visiting Ancient Rome was one of the best experiences I have had compared to other civilizations.

When I was there I saw that the Renaissance was a new concept for people in Rome because now people began to enjoy more luxuries, nicer clothes, better food, and the arts. There were more craftsmen, artisans, and merchants who developed into a middle class of people who had money, but who weren’t nobles or royalty.

As normal there were still people who had to work hard and struggle for their things, but more people were living better lives. There were gender roles and classes that shaped society has well. Upper-class women were confined to the home or the court. Someone accompanied them when they went to the market, church, or religious events. Middle-class and poor women spent their time working.

Women of the elite classes supervised a domestic staff and oversaw the education of their children. I did also notice that not only was the women unnoticed and did the less demanding jobs they also were invisible in most genealogies. As a member of a family line, an individual belongs by related through male parents. Women had a special responsibility for maintaining the honor of their husbands’ families by being above reproach sexually. I found out through various observations that women were expected to be virgins before marriage and to remain true to their husbands. I viewed that a common view of married life was that the husband was superior to the wife and was the master of the household.

Women had few legal rights. Scholars generally agree, however, that women were usually treated well and enjoyed a degree of equality with their husbands. A man may have had authority over his wife, but he was expected to provide for her, protect her, treat her kindly, and make sure she was taken care of in the event of his death. In addition, individual relationships created different types of marriages. If a man was much older than his wife, there tended to be more inequality, as was the case in many upper-class marriages.

In the lower classes there was likely to be less of an age gap, and the husband and wife had usually both worked as servants before they married. Therefore they had a basis for a relationship. I also got to witness a household through my stay in which they started calling their household a family. This was a new term that was becoming more common during this time period. As observed, I noticed that the most common households were based on one married couple and their children. Another common type, I found among people was using a system of inheritance in which property was passed to a person that has been termed the stem family household. The person who gets the property remains in the household with the parents after he or she married, forming a second family that might produce a third household generation.

A sess common was a structure was seen which is referred to nowadays as the extended-family household, it was based on a married couple and their sons which all remained in the household after they married, along with their children. Not only was I a bystander in the how the household was ran, but I also focused on the children and their education. Depending on the social status of the family and child depended on how they lived their lives. The few toys that have survived look much like the balls, sticks, hoops, dolls, and marbles of later times. There were occasional references in writing games and children of the poor who lived in very small houses probably did most of their playing out of doors. It was thought that children needed to be raised in a disciplined and controlled manner.

Also I watched many young children the age of around seven start intense learning for their education. Peasant children of both sexes started helping around the house even before they were seven. As in peasant households, training was determined by gender differences. Girls learned needlework and basic household management skills, while boys were taught horsemanship and hunting. At the age of five, six, or seven, some boys and girls began formal schooling. As I watched and learned a lot about the lifestyles of the people in Rome I discovered more information about their society as I moved through Rome.

Journey to Ancient Rome and Rome Renaissance. (2020, May 12). Retrieved from http://studymoose.com/journey-to-ancient-rome-and-rome-renaissance-essay 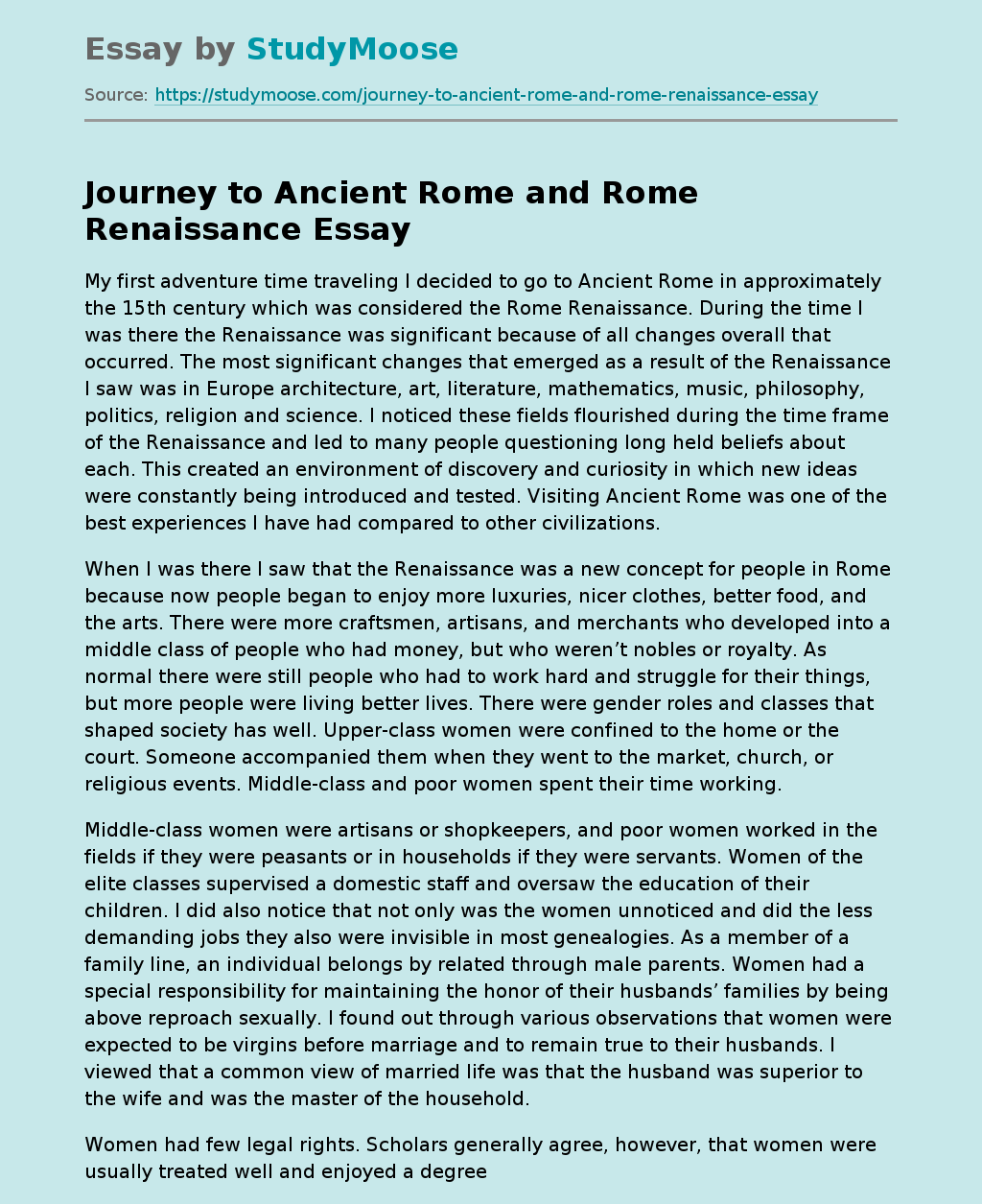