In Cynthia Carter and Stuart Allan’s essay (Berry 2000) the question of this reliability is raised. They use the example of the Independent Television News (ITN) changes in formatting and news selection. They claim that to boost ratings, ITN has changed from being a reflection of BBC news broadcasts, which carry more political and foreign stories; to now mirroring its tabloid counterparts and focusing on human interest and crime stories. They cite philosopher John ‘O’Neil who argued that this means a reduction in citizens being aware of socially significant events and over receiving simplified presentations of others.

Don't use plagiarized sources. Get your custom essay on
“ Journalists Play a Vital Social Role ”
Get custom paper
NEW! smart matching with writer

News Values and agenda Setting Harcup (2008) argues that news values are about what makes a story news. Because although Editors may argue that the media is a mirror reflecting representations of the world, news is worth reporting (and therefore being digested by an audience) precisely because it is an unusual occurrence. In the case of Government, (for example) we do not want to receive updates about a Member of Parliaments daily ablutions, because we all wash ourselves everyday and are quite aware of what the process involves.

We would like to be informed of any activities he undertakes on our behalf, so that we are aware of political process and can debate issues and make informed decisions in our own lives. If however the MP washed daily in spring water flown in from a Fijian mountain paid for out of public money, we would want to be informed. Firstly because this is an extraordinary practice and so newsworthy.

Secondly, it would be expensive and the public would be funding his habit themselves (as the taxpayer) and then could question what form of redress they may require.

Richard Keeble (2007) argues that although many journalists are concerned by the ethical issues of being the public’s watchdog and are resolute in providing unbiased accounts. The majority of the press are concerned only with getting the story and that ethical issues come a poor second. Pape and Featherstone’s (2007) section on journalistic agenda’s discusses the “Herculean task” (ibid p. 136) in remaining objective. In the chapter reciprocity of interest the issue of journalists, being used as tools by the establishment is discussed.

They offer the argument that the media are drawn into a mutually beneficial relationship with those in power and that they would be foolish to rock the status quo. Nevertheless, the counter argument is that the media acts as an “uncritical conduit between those in power and authority those whom they wish to control. ” (ibid p. 146) I would argue that by the choosing a particular selection of events to interpret, the journalist has the power to affect agenda setting.

Without the media, the public would find information on Government practice and policy difficult, if not impossible to obtain. Many writers and journalists argue that it is important if Britain is to remain a democratic nation that the press here remains free. Indeed John Pilger (1999) cites the example of the tyrannical regimes of countries such as Cuba and North Korea where journalists face prison or even death if they report anything negative about the Government. Thereby denying its citizens an objective view of their nation’s political process.

Political Issue A recent article in The Guardian reported on Gordon Brown’s warnings of tax cuts being necessary to hold off a deep recession next year. However, the article does not only report of the words of the Prime Minister. It also offers the standpoint of the opposition leader David Cameron, which is at odds with that of Brown. By submitting the view of the two opposing parties, it could be argued that the reporter, political editor Patrick Wintour given the public sufficient and information for debate.

It is worth noting however, that the stand of Britain’s third largest party, via leader Nicholas Clegg, is not given for consideration. Wintour has therefore taken a subjective decision in what to include in the account. It could be argued that supporters of the Liberal Democrats have been denied information for debate and indeed anyone interested in political process left with the impression that only Labour and Tory opinion is valid. Conclusion In Conclusion, I would argue that news accounts have to remain impartial and strive for demonstrating objectivity.

Informed debate is vital for our society to evolve and our country to remain democratic. Opinion is welcome and perhaps even necessary, but must be clearly stated as that. Journalist must fight the constraints imposed by ownership, impartiality and objectivity, news values and agenda setting. The fundamental role of a journalist is that of watchdog and public informant. Events must be reported without bias. The public must be able to trust the information is factual and not manipulated in any way. 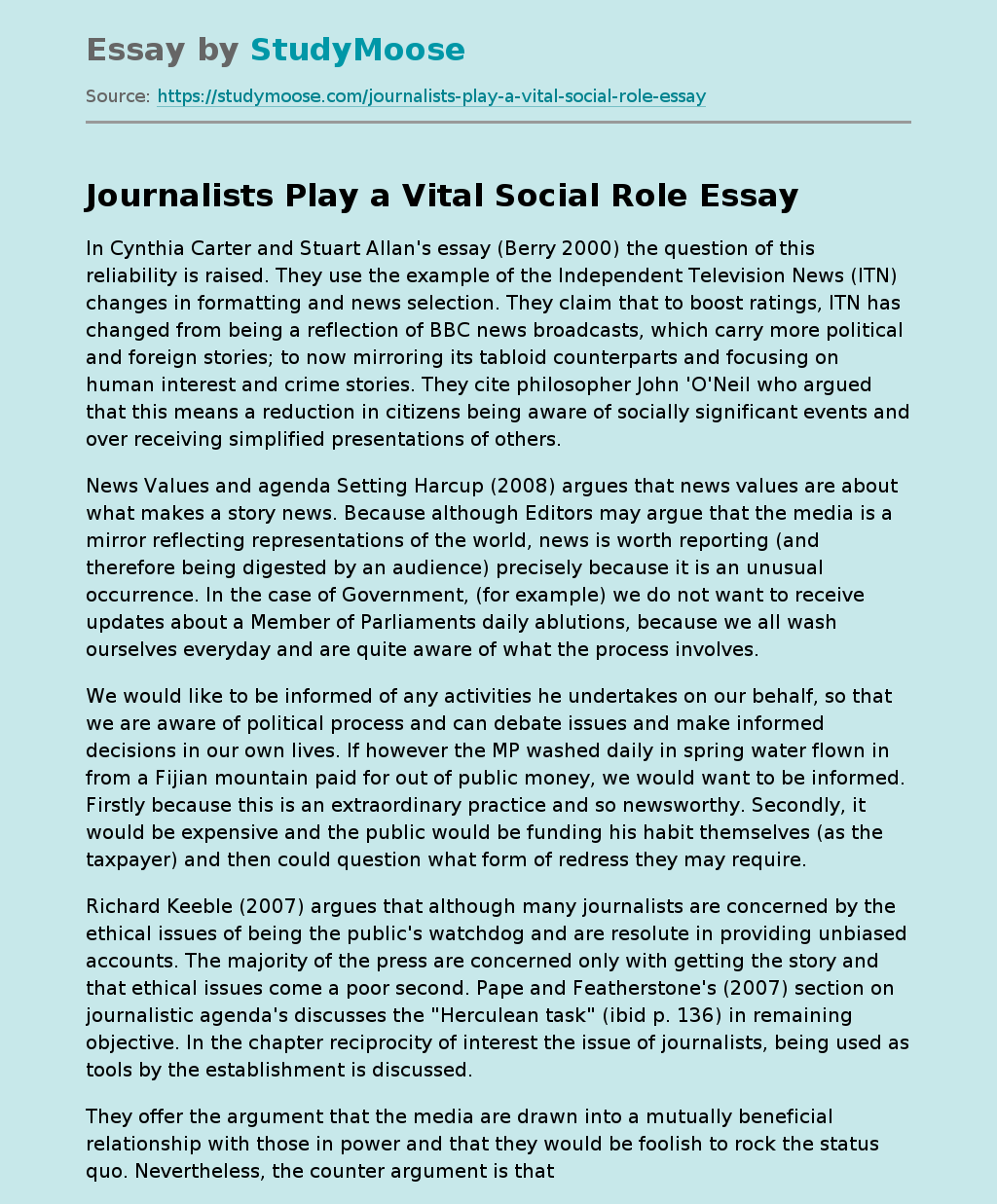