Journal on “Hands” by Sherwood Anderson

The short story, Hands, which was written by Sherwood Anderson, basically revolves around Wing Biddlebaum, who is the main character of the story, and his struggles to cure his seemingly “uncontrollable hands. ” In the story, Wing is portrayed as a middle-aged and nearly bald man who lives alone in his home. His only friend is George Willard, a young reporter for local paper, whom he values a lot. Other than Wing’s ordeal with his “disease,” the story also highlights his friendship with George.

Don't use plagiarized sources. Get your custom essay on
“ Journal on “Hands” by Sherwood Anderson ”
Get custom paper
NEW! smart matching with writer

Basically, Wing first discovered his “disease” when he was still a teacher in Pennsylvania. As a teacher, Wing was very close to his students and often touched their hair and shoulders as a form of affection. However, one of the students, a boy, misinterpreted his actions as sexual in nature, causing his parents to confront him and throw him out of town. This experience basically caused Wing to live in isolation as he believed he was sick and he needed to avoid close contact with people to be cured.

However, Wing’s “uncontrollable hands” again continued to haunt him despite his isolation him and almost jeopardized his friendship with George. In another flashback, while Wing is giving advice to George, he suddenly finds himself caressing the boy’s shoulders with his hands the just like the way he touched his students shoulders. Although George doesn’t notice what he was doing to him, Wing was bewildered upon realizing what his hands were doing to the boy and so he quickly placed them into his pockets.

It was here that he realized that he was not yet cured of his “disease. ” Generally, although the story did not specifically say that Wing has a “disease,” almost every event concerning his hands showed that he had one. However, it would be more accurate to say that his “uncontrollable hands” were psychological in nature. Basically, when Wing uses his hands to do things such as picking strawberries at an extraordinary speed and caressing the shoulder’s of his students, he does so almost subconsciously, which further supports the fact that he had a mental problem.

Journal on “Hands” by Sherwood Anderson. (2017, Mar 16). Retrieved from http://studymoose.com/journal-on-hands-by-sherwood-anderson-essay 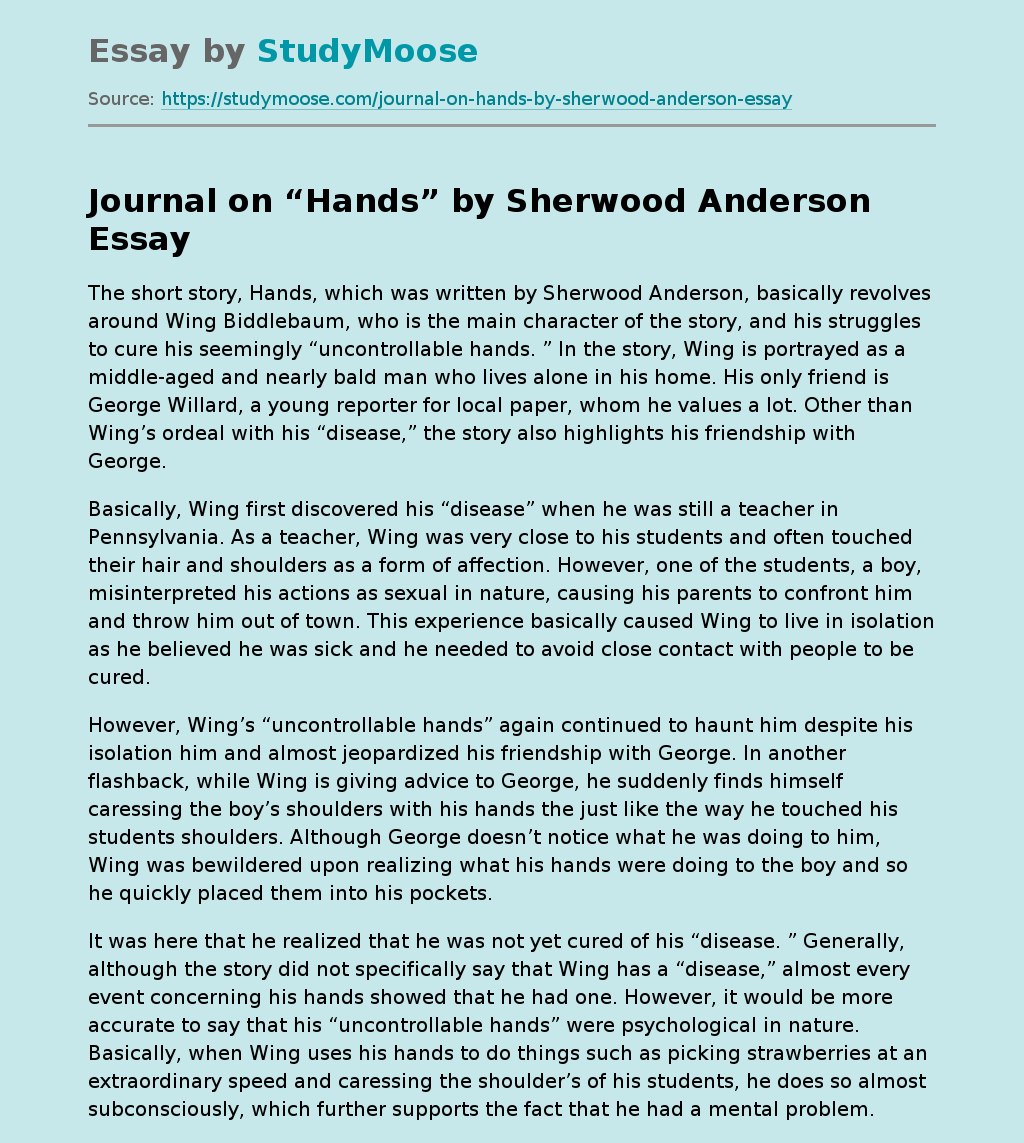