Fortunately, Rizal’s first romance, with its bitter disillusionment, did not adversely affect his studies in the University of Santo Tomas. His love for higher education proved to be greater than his love for a pretty girl. After finishing the first year of the course in Philosophy and Letters (1877-780), he transferred to a medical course. During the year of his studies in the university, which was under the Dominicans, rival education of the Jusuits, he remained loyal to Ateneo, where he continued to participate in extra curricular activities and where he completed the education course in surveying.

Don't use plagiarized sources.
Get Your Custom Essay on Jose Rizal in UST Just from $13,9/Page

As a Thomasian, he won more literary laurels, had more romances with girls, and fought against Spanish students. Mother’s position to higher education.

After graduation with the highest position in Ateneo, Rizal had to go the University of Santo Tomas in order to prepare himself to a private career. The Bachelor of Arts degree during Spanish times was equivalent to a high school diploma today.

It merely qualified its holder to enter a university. Both Don Francisco and Paciano that Jose should pursue a higher learning. But Dona Teodora did not want him to study more. Evidently she had a premonition that to much knowledge would imperil his child life. In a family council in the Rizal’s home in Calamba, she vigorously objected to have her beloved Jose acquired a higher education. She was thinking of the safety of her son. She know the fate of Filipino intellectuals-Father Burgos, Dr. Antonio Ma. Regidor,Jose Ma. Basa, and others of 1872-who were either executed or exiled by the Spanish authorities, and blamed their sad fate to their learning.

Fearful of the Spanish authorities who seem to frown on those Filipinos who learn to much, she warned her husband. “Do not send Jose again to Manila. If gets to know to much, they will cut off his head!” Jose, who was present in their family council when his mother said this, was shocked. He know her mother was a woman o education and culture: she even taught him and inspired him to write poetry; she came from a family of high learning – her own brother ( and his uncle)Jose Alberto Alonso had been educated abroad and could speak multiple Spanish, French, English and
German. Rizal enters the university. In April 1877, Rizal, who was bearly16 years old, matriculated in the University of Santo Tomas taking up Philosophy and Letters. He enrolled in this course for two reasons:

(1) his father like it and
(2) he was “still uncertain to what career to follow”.
He had written to father Pablo Ramon, Rector of the Ateneo, who had been good to him during his days in Ateneo, asking for advice in the choice of career. Unfortunately, Father Recto was in Mindanao and during those days it several months to travel a letter from Manila to Mindanao. Consequently during his first term (1877-78) in the University of Santo Tomas he studied Cosmology, Metaphysics, Theodicy and History of Philosophy. It was during the school term (1978-79) that Rizal took up medicine, enrolling simultaneously in preparatory medical course and the regular first year medical course. Reasons Why Rizal Hate UST

1. Filipino Students are racially discriminated
2. Dominican Friars are hostile to him
3. The method of teachings were obsolete and repressive
Reasons Why Rizal Took Up Philosophy & Letters
1. He is not certain as to what course to take
2. His father like it

Reason For Taking Medical Studies
1. It is the advice of the Rector of Ateneo, whom he consulted for a choice of career, finally answered his letter, and recommended medicine.
2. He wanted to be a physician so that he may cure his mother’s failing eyesight. Rizal’s Love Affairs in UST

Leonor “Orang” Valenzuela
Leonor Valenzuela the fourth girlfriend of Rizal. Several months after during Rizal sophomore year at the University of Santo Tomas, he boarded in the house of Doña Concha Leyva in Intramuros. The next door neighbors of Doña Concha were Capitan Juan and Capitana Sanday Valenzuela, parents of a charming girl named Leonor. Rizal a medical student from Calamba was a welcomed visitor in the Valenzuela home, where he was the life of the social parties because of his clever sleight of hand tricks. He courted Leonor Valenzuela, who was a tall girl. Almost as tall as Jose himself, and had a regal bearing. He sent her love notes written in invisible ink. This ink consisted of common table salt and water. It left no trace on the paper. Rizal, who knew his chemistry, taught Orang (pet name of Leonor Valenzuela) the secret of reading any note written in the invisible ink by heating it over a candle or lamp so that the letter may appear. But as with Segunda, he stopped short of proposing marriage to Orang.

Romances with other girls
After Segunda Katigbak he courted a certain “Miss L”. After a few visit he stopped wooing her. After Miss L he courted Leonor Valenzuela (Orang) but stop short of proposing marriage. Rizal’s next romance was with his cousin Leonor Rivera. Between Jose and Leonor spranga beautiful romance and became engage. In 1879, the Liceo Artistico – Literario (Artistic Literarylyceum) of Manila held literary contest it offered a prize for the best poem by a native or a mestizo. Rizal submitted his poem “A La Juventud Filipina”. (ToThe Youth Filipino).The board of judges was impressed of Rizal poem and gave it the first prize consisted of a silver pen, feathered shaped and decorated with a gold ribbon. The inspiring poem beseeched the Filipino youth to rise from the laziness. Finishes Surveying course in Ateneo (1878)

During his term in University of Santo Tomas (1877 – 78, Rizal also studied in Ateneo, he took the vocational course leading to a title of porito agrimensor (expert surveyor)). In those days it should be remembered, the college for boys in Manila offered vocational courses in agriculture, commerce, mechanics and surveying. Rizal’s unhappy days at UST. Rizal’s Ateneo boy wonder, found the atmosphere at the UST a suffocating to his sensitive spirit. He was unhappy of this Dominican Institution of high learning because (1) the Dominican processors were hostile to him, (2) the Filipino students were racially discriminated, and (3) the method of teachings were obsolete and repressive. Decision to study abroad

After finishing the fourth year of his medical course, Rizal decided to study in Spain. He could no longer endure the rampant bigotry, discrimination, and hostility in UST. His uncle, Antonio Rivera, Leonor’s father, encourage him to go abroad. Both Paciano and Saturnina, whom he contacted secretly, were of similar opinion. For the first time, Rizal did not seek his parent’s decision and blessing to go abroad, because he knew that they, especially his mother will disapprove his plan. He did not also bring his beloved Leonor in his confidence. He had enough common sense to know that Leonor, being a woman, and young and romantic at that, could not keep a secret. Thus, Rizal’s parent, Leonor, and the Spanish authorities knew nothing of his decision to go abroad in order to finish his medical studies in Spain, where the professors were more tolerant and understanding than those of the University of Santo Tomas.

In 1880, the artistic literary lyceum opened another literary contest to commemorate the fourth centennial of the death of Cervantesand was opened to both Filipinos and Spaniards. Many writers participated including Rizal who submitted an allegorical drama entitled”El Consejo de losDioses” (The council of the Gods). Rizal won and for the first time, an indio defeated several Spanish writer. Other Rizal literary work as an Thomasian: “Junto al Pasig “, “Abd-el-Azis y mahoma”, “Al M.R.P. Pablo Ramon”. Rizal was the champion of the Filipino students in their frequent fight against Spanish students. In 1880, Filipino students in UST Founded “Compañerismo “and Rizal was the chief of his secret society and led various street fight.. After finishing the fourth year of his medical course, Rizal decided to study in Spain. He did not seek his parent’s permission. Thus Rizal’s parents, Leonor, and the Spanish authorities knew nothing of his decision to go abroad in order to finish his medical studies in Spain. 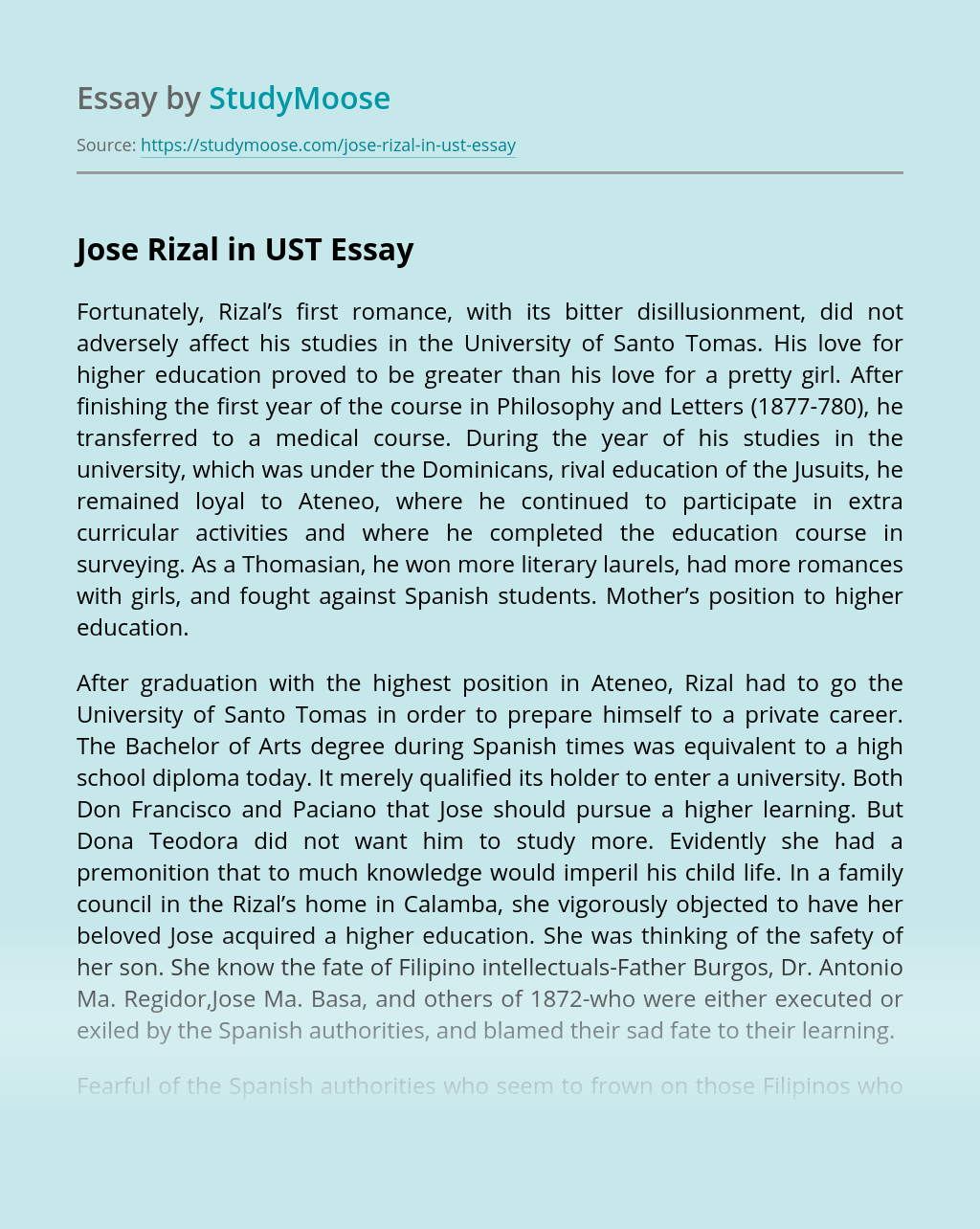 “EMOTIONAL INTELLIGENCE FOR STUDENTSBHAVYA RAJPAL ” BBASEP17S023S.P. JAIN SCHOOL OF GLOBAL MANAGEMENTNOTEHow Can Emotional Intelligence Help Students?AbstractEmotional intelligence is a type of social knowledge that involves the ability to monitor one’s own and others’ emotions, to discriminate among them, and to use the information to guide one’s thinking and actions (Salovey & Mayer, 1990). The... VIEW ESSAY

Concepts Reliable interaction is the key for establishing and maintaining positive relationships with others. It helps develop trust and motivate others to look for guidance and share appropriate details. We can enhance or deteriorate someone’s trust in us by what we say and do. To enhance a relationship, be sincere and open with them, and... VIEW ESSAY

The X-Ray imaging system has one function, which is to offer a consistent circulation of electrons that are strong enough to produce and x-ray beam to create an image. There are several sizes and types of imaging systems but no matter what system you use, every type will have 3 main areas. Those sections are... VIEW ESSAY