“Never try to be better than anyone else…but always try to be the best you can be. The gulls who scorn perfection for the sake of travel go nowhere slowly. Those who put aside travel for the sake of perfection go anywhere instantly. ” Elder gull Chiang to Jonathan Livingston Seagull on the need to be our best. And he is a seagull, so it must be true. (Bach, 1970) “Seagulls, as you know, never falter, never stall. To stall in the air is for them disgrace and it is dishonor.

Don't use plagiarized sources. Get your custom essay on
“ Jonathan Livingston Seagull by Richard Bach ”
Get custom paper
NEW! smart matching with writer

” (Bach, 1970). Similarly policemen should not never shirk their duties and never fail to uphold their code of honor because in doing so they dishonor, not only themselves but also the whole police department.

“… for his reckless irresponsibility” the solemn voice intoned, “violating the dignity and tradition of the Gull Family… ” (Bach, 1970) A policeman must never indulge in irresponsible and reckless behavior as it violates the integrity and honor of the whole police department.

“Life is the unknown and the unknowable, except that we are put into this world to eat, to stay alive as long as we possibly can. ” (Bach, 1970) Life in the criminal world is also unknown as a policeman can never know for sure what crime he might have to go prevent or remedy. He is put in place to protect his fellow human beings and that alone is his purpose. in doing that he must put his life at stake, even though he may have a family back home.

Duty comes above all.

However, if he sees any discrepancy in the department he is working for, he should honor the code of humanity and stand up against it. He must not be afraid to take risks for the betterment of his department and for the protection of the people. For the general good he must take a stand against injustice, just the way Jonathan Livingston Seagull did. He must not follow the discrimination practiced by the flock’s but instead be open to new and innovative ideas to fight crime.

Much of the popularity of Richard Bach’s Jonathan Livingston Seagull in the early 1970s surely lay in the spiritualization of sheer technique, as the gull, training for faster, more perfect flight, transcended his physical limits and became immortal. On a more banal plane there is some parallel in the distinctively American use of terms like “goals” and “personal objectives. ” “I have set new goals for myself” often refers to quite material and short-run plans, but it has the headiness of moral purpose.

Here, as in the presidential rhetoric, ideas of vigor and effectiveness are strongly bound up with motion: the achieving individual, like the nation, needs a shining locomotive to pull himself on. Bach’s book is a kind of fable and the highest-ranking American work of fiction on the list, is anything but a violent suspense. Exiled from his flock for daring to fly for the joy of it, rather than following the dignified Gull family tradition, Jonathan discovers that his purpose in life is to help others find perfection.

Nativistic returns to nature and the “greening of America” phenomenon lured the cultured to an asylum outside the culture. The dead weight of technology was dragging spirits that sought to soar into more elevated and ethereal zones. Reductionist theories of human nature harnessed to behavioral-analysis techniques sapped what little life remained in that generation which had suffered the loss of “autonomous self. ” The search for transcendence drove that generation to seek a god within, and the “Jonathan Livingston Seagull sub society” was born.

(Watson, 1983) The book is the real essence of the spirit of internal motivation. The human spirit, like Jonathan Livingston Seagull, can soar. The inspiring story of the courage and persistence of a seagull can be translated into real life. Suppose Jonathan Livingston Seagull smartly runs a pattern of the following shape: ‘Duties of beneficence are not owed to all persons equally, but only to those near and dear. ‘ In answer to the first objection, it matters not at all that Jonathan is an Italian seagull: we will do better to interpret these marks with English semantics.

(This is, after all, pretty lousy Italian. ) In answer to the second objection, we might better figure out to whom we owe duties of beneficence if we respect the normal English meaning of words like ‘near’ and ‘dear’ than if we try to reason our duties out ab initio. Now why might this be true? The answer is that, for many people, moral insight is more easily achieved if they reason under the guise of interpreting an authoritative text than if they reason with Sartrean self-awareness that everything is up for grabs at once.

This is taken to explain the staying-power of the world’s popular religions. Despite their bizarre metaphysics, these religions give their believers authoritative moral texts the interpretation of which yields greater moral insight than believers are likely to achieve on their own. 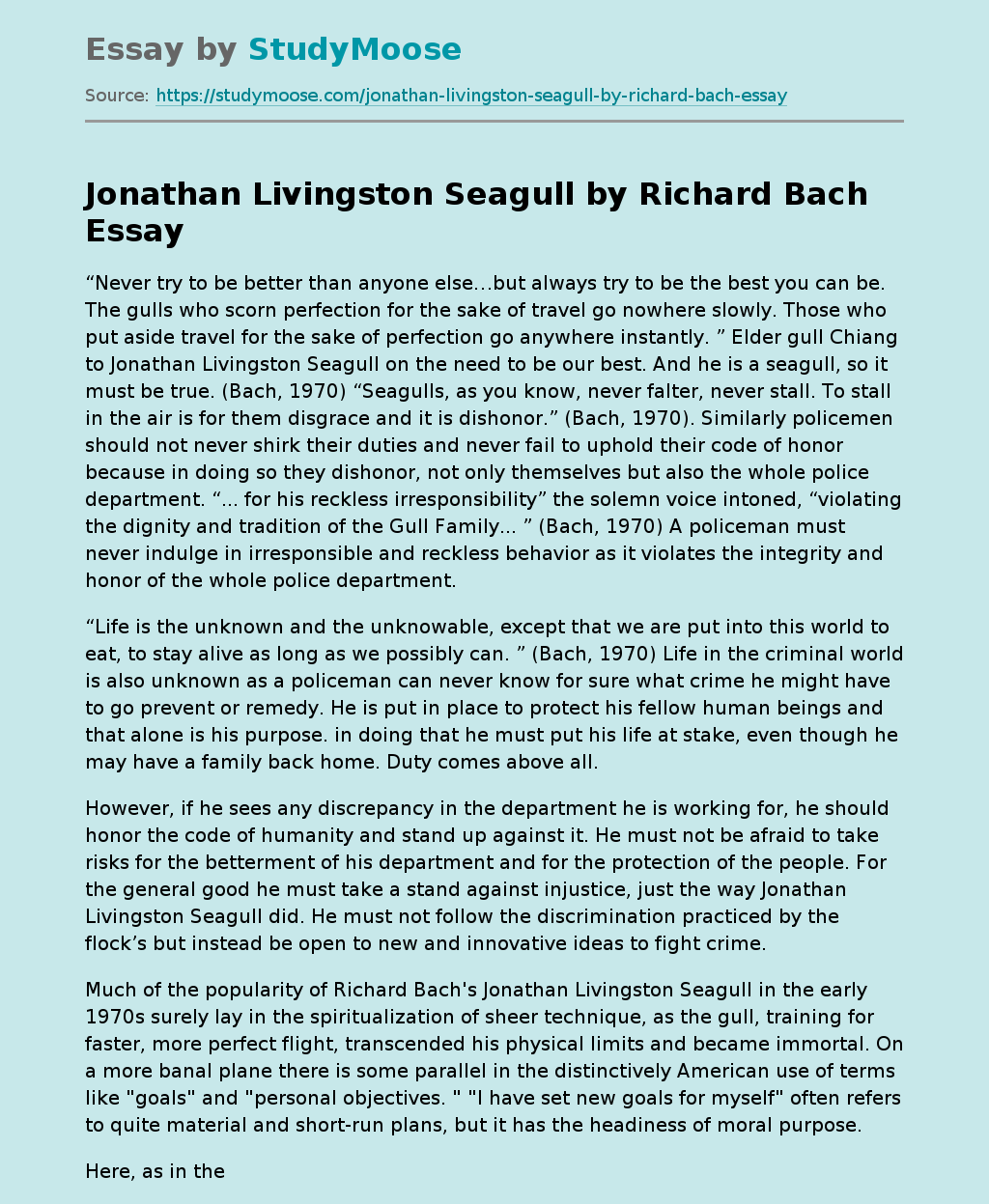