Before entering politics, he was a judge in the state of Harrison, Texas, where he gained notoriety as the “king of shame” for its provisions insulted publicly the perpetrators. One of these sentences involved a drunk driver being forced to stand outside the bar with a sign around it … , journalist Jon Ronson recounts Jonah Lehrer and other public shamees experiences dealing with internet hordes and mobs who have destroyed lives through their viciousness and social media shamings. He tells the tale of other famous cases such as Justine Sacco’s the woman of the infamous ‘AIDS Tweet’ and explores the dynamics related to public shaming, recounting the horrific effects that the shamings have had on their victims.

Don't use plagiarized sources. Get your custom essay on
“ Jon Ronson ”
Get custom paper
NEW! smart matching with writer

Ronson takes the reader on an interesting tour of the ecosphere around the phenomenon. Starting with documented cases hundreds of years ago in small-town New England, to the News of the World controversies and their victims, Ronson also explores companies that focus on creating public images and profiles for individuals who’ve had their lives ruined by shamings.

He also delves a little into the psychology surrounding the phenomenon. Though he gets close, Ronson never truly provides an answer for why exactly social media ‘annihilations’ (as he calls them) occur. Ronson speaks with numerous psychologists and also manages to cast considerable doubt on the validity of the famous (and accepted as true) ‘Stanford Experiments’ conducted by Phillip Zimbardo.

In an exploration of public shaming and its effectiveness, he highlights the story of judge Ted Poe from Texas, who employed shaming tactics to those convicted in his courtroom.

Poe would assign assorted punishments like forcing individuals charged with manslaughter to carry signs stating similar things to: ‘I killed two people while drunk-driving.’ Did Poe’s methods work? Apparently so. Ronson tells his reader how Poe boasted of the success rate of his actions. Social media has acted as a great equalizer. Even the most obscure person today can tweet at Donald Trump and receive hundreds of thousands of likes and retweets. Social media in a way empowers the little guy. But it also allows easy access to pile-ons. One can easily attain sanctimonious pleasure from logging on and throwing their input towards the latest public annihilation. But there is one distinct difference to what Ted Poe did in the courtroom and how social media pile-ons work it is a distinction which Ronson spends a deserved amount of time highlighting: Individuals shamed by Poe’s tactics were often convicted criminals while the targets of social media hunts today are often individuals who have merely transgressed socially acceptable norms. They are not criminals in any way.

Social media has acted as a great equalizer. Even the most obscure person today can tweet at Donald Trump and receive hundreds of thousands of likes and retweets. Social media in a way empowers the little guy. But it also allows easy access to pile-ons. One can easily attain sanctimonious pleasure from logging on and throwing their input towards the latest public annihilation. This is my first Jon Ronson book. I know that he is a popular author yet I have only viewed a single TED talk by him.

An alluring aspect of Ronson’s writing is that he weaves a story, complete with sympathetic characters who have made tiny to large mistakes but then suffered out of proportion consequences through the hands of social media notably, Twitter. In this way Ronson uses some of the literary critic and English professor Jonathan Gottschall’s ideas from The Storytelling Animal: How Stories Make Us Human. In his book, Gottschall points out that good non-fiction writing often consists of storifying a series of events so that they read like fiction, complete with pitiable protagonists and a cast of characters. As an aside, a reader gets the distinct impression that Ronson is in some way atoning for his previous participation in public shaming. He tells us that now he is more aware of their effects, he will be more careful in how he engages in them from now on.

Highly entertaining, accessible, and easy to follow, So You’ve Been Publicly Shamed is a good candidate for a compelling read or listen. Through it all, however, I found that Ronson missed one answer, an answer I was led to believe was coming but never arrived: the why. Though he approaches its periphery with thoughts about ‘feedback loops’ towards the end of the book and how they propel online shaming, I felt he missed the deeper questions of why do human beings engage in public shaming and similar behaviors? Are these behaviors evolutionary impulses? Why do we ostracize and punish those who we perceive have transgressed acceptable norms? They are questions that I’ll have to look elsewhere to find the answers to. 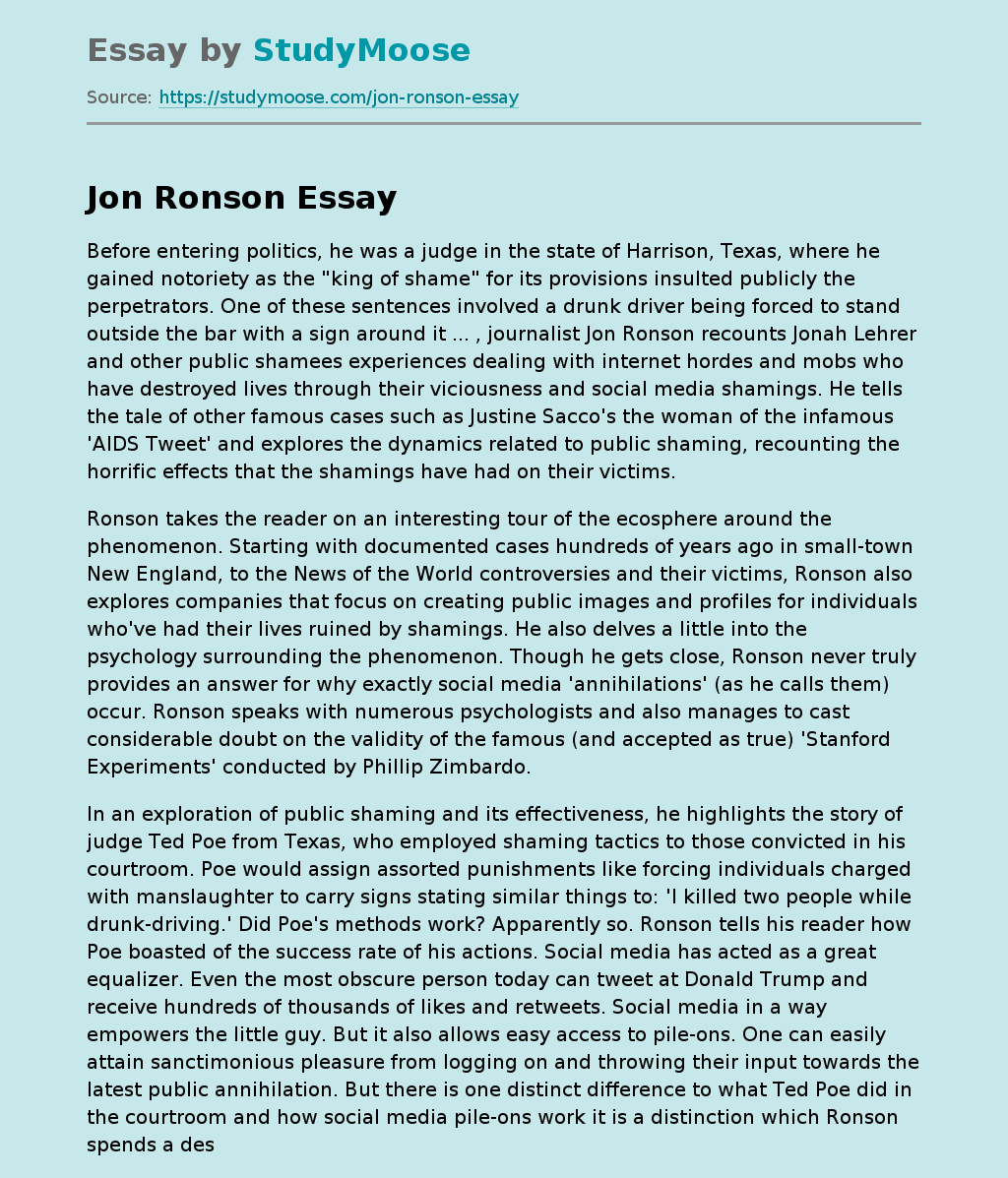