This movie is about John Quincy Archibald (played by Denzel Washington) and his working class family who lived in Chicago. His son is diagnosed with cardiomegaly and he needs a heart transplant.

He realized that his insurance does not cover the medical expenses and he decides to takes matter in his own hands. John and his wife Denise (played by Kimberly Elise) worked in factories, but the money they made was not enough. Denise had her car repossessed and John had to take her to work.

Don't use plagiarized sources. Get your custom essay on
“ John Q Movie ”
Get custom paper
NEW! smart matching with writer

He was working a part time job with no hope for a second job. He tried to get a second job but he was told that he was overqualified. Here we see the principle of equality of fair opportunity and the principle of justice. Their only son, Michael, loved bodybuilding and baseball. One day, he collapsed during the baseball practice. They took their son to the hospital and they were told that their son is very sick and he needed a heart transplant. Here we see the truth telling of the doctors. They were honest with the treatment and the money needed for the treatment, which was $250,000 and the 30% ($75,000) needed as a down payment to put his son on the donor list. John went to work to find out that his health insurance got changed because he was working part time.

There was no veracity involved from the employer. The employer change his PPO to a HMO health insurance coverage without his knowledge and that did not covered the entire hospital bills or the heart transplant.

John went to the welfare office to get help but he did not get any because he was working and making $18,900 per year. Here we see the socialist conception of justice. John started to get donations from people, he sold the stuff from the house and he finally raised six thousand dollars. He paid the money to the hospital and he found out that he is $30,000 in debt with the hospital. After paying the hospital the $6,000, his wife called him and told him that Michael will be released that day and it was nothing they could do. Denise was suffering tremendously and nothing could take her pain away. While she was next to Michael, she was seeing children dying one after another. She had no hope anymore. John decided to go and talk to the cardiologist about his son’s situation but nothing could change the doctor’s mind. John got really mad and he put the gun to the doctor’s head and took him hostage.

He entered the emergency room and told everyone that they are taken hostages and he locked the emergency room. He had taken eleven people hostages and he finally told them the reason for his situation. Some people sympathized with him and some not. Here we see the ethical egoism and the harm principle involved in John’s way of thinking. The cops surrounded the hospital and Frank Grimes, a cop, talked to John about his motives and demands. He explained that he wants his son on the donor list, or his son will die. Frank talked to Rebecca Payne, the hospital administrator about the situation. They gather around and decided to lye and say to John that they will put Michael’s name on the donor list. There is no veracity involved and the duty of fidelity does not take place. Michael released some of the hostages after he heard that his son is on the donor list. The television was involved and John’s friend spoke to him on TV. It was an emotional moment.

John had a lot of supporters outside the hospital. Denise called John and told him that their son is on the donor list. John talked to his son and tears were running down on his face. He was suffering enormously. During this emotional phone call, the Chief of Police gave orders to a sniper to enter the hospital’s emergency room to shoot John. The sniper shot John, but not lethal. People saw everything because it was live on TV. The sniper fell down from the ceiling and John bit him up. John tight up the sniper and took him as hostage. After that, he asked for his son to be brought to the emergency room; the cops agreed in exchange for the sniper, then the sniper was released. After his son arrived to the emergency room, John told everyone there that he wants to commit suicide to save his son’s life.

He persuaded Doctor Turner to perform the surgery and he had two of the hostages to witness his last request. The doctor said that something like this is not ethical and he refused in the beginning; then, he accepted it and the principle of respect for autonomy. He knew that if John was committing suicide that was against his oath where he promised the non-maleficence. When he was thinking about saving Michael’s life, that was beneficence. John went to say good-bye to Michael and went to the surgery room. He loaded the gun to shoot himself, but the safety’s gun was on. When he prepared the gun for the second time, his wife came screaming to the emergency room’s door, saying that Michael is saved because a woman who got killed in car accident was a donor.

That woman had the same blood type (B+) as Michael. Before the surgery was done, the hostages were released and one of the hostages pretended to be John so John can assist to his son’s surgery. The transplant surgery was a success and everyone was happy for it. Here we see the act-utilitarianism and rule-utilitarianism embedded together. After surgery, John was arrested. He was found guilty of kidnapping and he got a minimal sentence. John was happy and proud by doing what he did. His son’s “thank you” meant everything to him. He was ready to do the ultimate sacrifice. He was ready to commit suicide in order to save his son. John made history. He got the media’s attention related to the health care system in this country and the problems related to the HMO. Here the ethics of care were neglected. 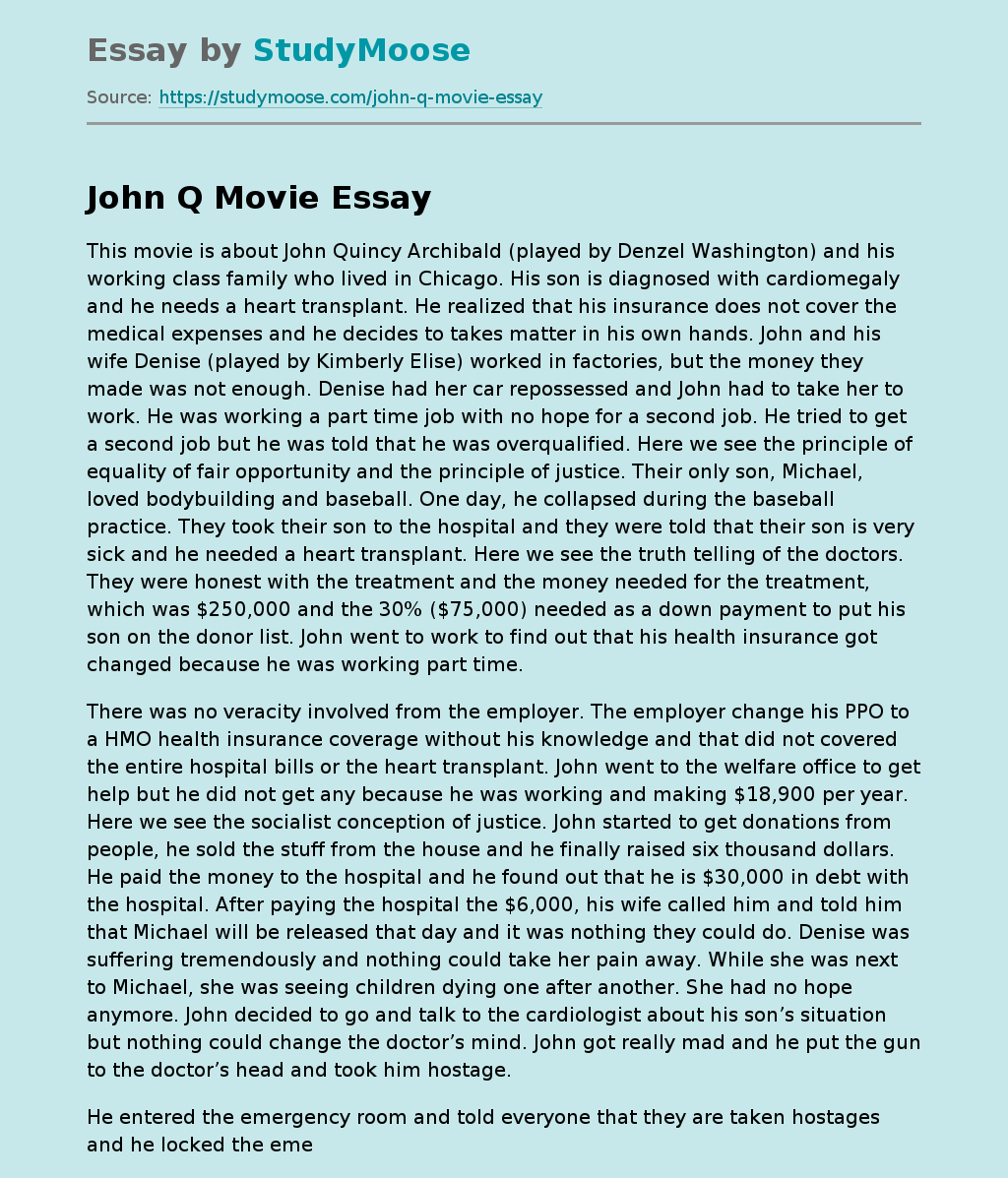