In The Crucible by Arthur Miller, John Proctor is the main character. He is the tragic hero of the story with his one defect being his pride. John Proctor’s defect was his pride. This in turn created scenarios that were unpredictable and unfortunate. Shockingly, Proctor is accused of a crime he did not commit. Proctor’s life had been turned upside down when Abigail Williams, a girl who had feelings for Proctor, tried to blame his cherished ones. John Proctor’s imperfection was his pride John Proctor’s main flaw, pride, was what led him to his death.

Don't use plagiarized sources. Get your custom essay on
“ John Proctor Character Analysis in The Crucible ”
Get custom paper
NEW! smart matching with writer

Pride assumes a fascinating job with regard to the life of John Proctor in The Crucible. As spoken by John Proctor close to the ending of the play, “Because it is my name! Because I cannot have another in my life!”(Miller 143). During the beginning of the play, Proctor would not go against Abigail to keep his name from being darkened. His proud mentality is what causes his defeat, In Act IV, Minister Hale asked everyone to confess to the transgression to spare their lives.

While conversing with Elizabeth he expressed, “It may well be God damns a liar less than he that who throws his life away for pride” (Miller 132). John Proctor is discarding his life for pride since he does not have the boldness to uncover his sin. In this manner, Proctor ought to admit to black magic. Also, Proctor cannot do this since he cannot darken his name. He will wind up uncovering his wrongdoing and it will be the end of his name.

At the end of the play, Proctor is sent to death, and Hale beseeches to Elizabeth, “Lady, beg him! Lady! It is pride, it is vanity.” (Miller 145). Hale hollers these words at Elizabeth Proctor since he was shouting her to persuade John to concede. However, Proctor chooses to die with his dignity rather than losing pride. A significant piece of the grievous legend is that the saint must experience an inversion of fortune, otherwise called peripeteia brought about by their very own imperfection. The start of Proctor’s arrangement of unfavorable circumstances started when Abigail blamed Proctor’s friends and family with false accusations, creating a tough situation with the court. Proctor told Abby close to the starting that nobody must know about their unholy sin. When he refused to love her any longer, Abby ends up malicious. Throughout the story, she tries to kill Elizabeth, John Proctor’s wife, to obtain John’s love. In contrast, she is the reason that John Proctor had died a tragic hero. This misfortune upon Proctor led to his demise and the death of the people before him. In conclusion, John Proctor fits the form of a tragic hero since he harbors every one of the characteristics of a sad saint, for example, hamartia, purge, peripeteia, and is honorable. John Proctor’s primary deadly weakness was his pride which eventually ended his life. The Crucible’s tragic hero was John Proctor, the man who died for his sins, but lives through as a hero for those who died before him.

The Crucible, written by artuer Miller, revolves around many characters, but only a few of them help make up the whole story. The most and if not import character is John proctor, because the book revolves around him.

John Proctor is the central character in which the drama of The Crucible revolves around. This primacy is helped by the fact that he has relationships with many of the other characters in the play. This charter is very import to the play, because without his actions and ideas, there would be know story to tell. In the first Act we see that John Proctor has an affair with Abigail that he says he would prefer to longer connect with. Proctor is skeptical of witchcraft and of Parris’s claims of persecution and leaves. Elizabeth encourages John to tell the court what Abigail told him about the girls faking it, which triggers a discussion about John’s affair with Abigail and his continuing guilt about it. Following what happened, his “good name” has been shamed, and rotten. Throughout the book and the rest of the story, john procter fights to get his good name back from the townspeople. In the end of the book his ultimate goal is to restore his good name. Over the course of the act, Proctor becomes frightened of the power the girls have with their accusations, especially once his wife is arrested for witchcraft. In Act 3, we can see that procter, goes to court to fight the charges against his wife, he eventually ends up being accused of witchcraft himself. John is very important to this story, He is in the middle of everything. In the last sense we can see that Proctor is in a pickle. He is Tormented over whether or not to confess to witchcraft to save himself, Proctor ultimately ends up tearing up his signed confession and going to the gallows with what remains of his integrity intact.

John Proctor is a dynamic character. We know this because of how much he changed as time went by in the play. He first started out as a quiet farm boy that was shy and timid. He eventually had enough of being shy and scared, and he grew up to be a man with a lot of courage.

John Proctor throughout the noble shows that he still tries to stay truthful to God. He did when reading the 10 commandments out loud leaving out adultery, because that was the only one he was trying to hide, and not let people know about, because he knows he would die. John Proctor embodies the fullness of the promise of God’s graciousness and forgiveness. He is a sinner, one who has repented and asked for God’s mercy. So at the end of the play, when he decides to die valiantly to save his immortal soul, he is putting himself into God’s gracious hands. He is giving himself up for something better and being placed in God’s hands once and for all. During the end of the play and up until his death John Proctor is said to be the hero of this book. He showed us all what it’s like to be faced confession and with doubt that can lead to something that is very bad, and how to overcome it. 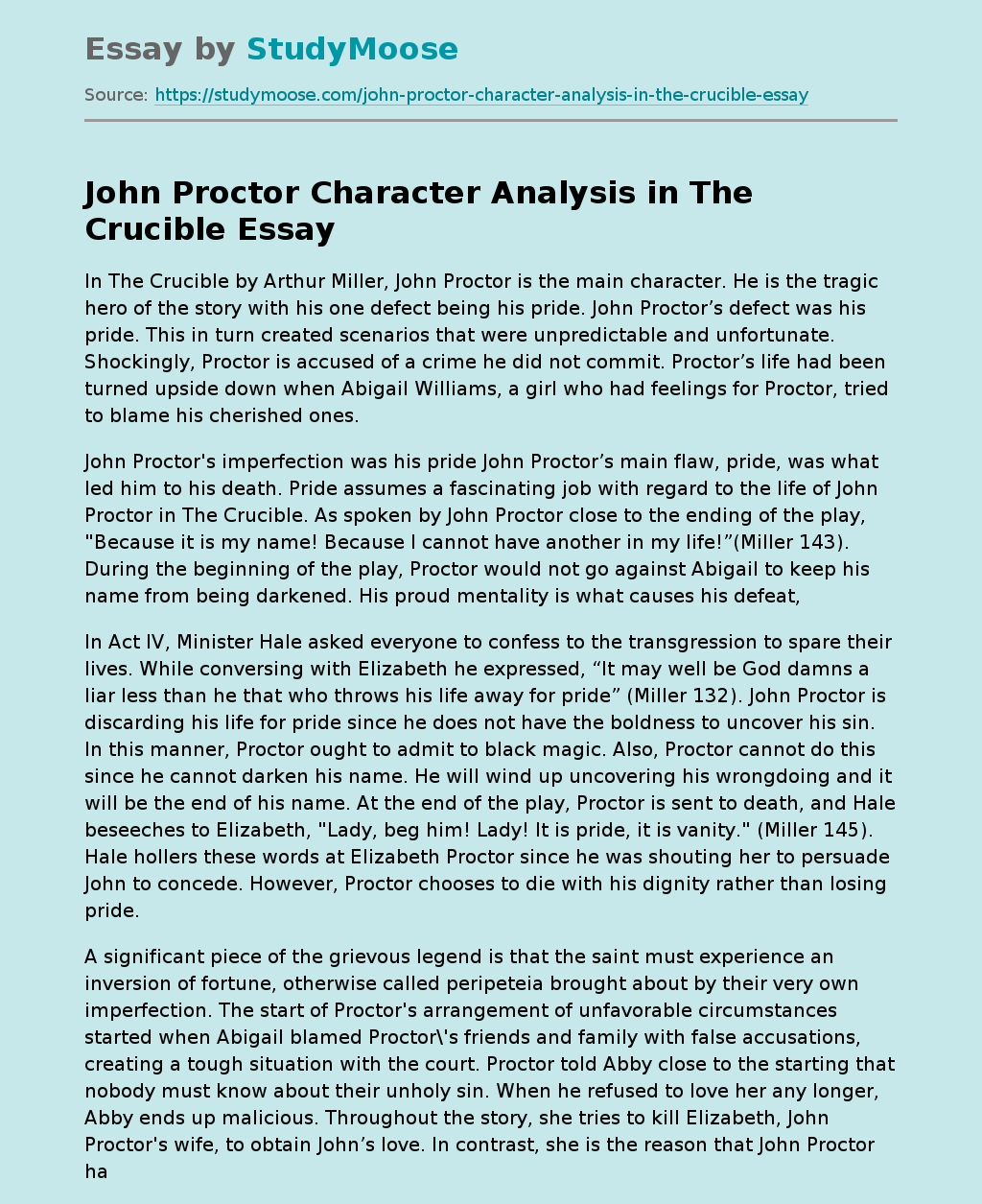