A tragic hero is a character whose flaw or mistake ultimately leads to their downfall. In Arthur Miller’s play, The Crucible, the small town of Salem is immersed in a crisis due to the accusations of witchcraft. One of the accused is John Proctor, a strong and moral farmer. John Proctor meets the definition of a tragic hero because of his fatal flaws, the affair with Abigail and his pride, but redemption at the end of the play saves his morals.

Get a verified writer to help you with John Proctor a Tragic Hero?

S One of John Proctors flaws is his affair with Abigail.

The affair with Abigail is his downfall because it provokes the witch trials. Abigail doesn’t want to believe that the affair is over between her and John and tries to kill Elizabeth Proctor by preforming witchcraft with other girls in the town. When Parris discovers them and the town begins to ostracize the girls, they call out the names of others they have supposedly seen with the Devil in order to save their reputations and possibly their lives.

Therefore, the affair between John and Abigail is the spark of all the hysteria surrounding the witch trials.

The affair also caused Elizabeth Proctor to distrust her husband, John, who for seven months was trying to get into her good graces and is tired of her suspicion. He tells her “… I have not moved from there to there without I think to please you… I cannot speak but I am doubted, every moment judged for lies… “(52). This illustrates John’s determination in attempting to redeem himself for his sin.

Because John cannot control his desire and resist temptation, his life is being destroyed by the jealousy and need for revenge of Abigail, indicating the beginning of his downfall and road to becoming a tragic hero.

John Proctors major flaw was his pride. John’s honor and good name is what kept him from confessing to adultery, which would have most likely, halted the witch trials. Elizabeth asked him to go into the court and tell them that Abigail is fraud, but he refused. He said, “I know I cannot keep it. I say I will think on it! “(51). Nonetheless, when Elizabeth is arrested, John has to choose between his pride and his wife. He tries to fix it by bringing Mary Warren into the court to confess to lies and pretense.

This fails when Mary Warren turns on him and he has to admit to being an adulterer, reserving his dignity in order to rescue his wife. Unfortunately, he too is arrested after Elizabeth is questioned about his confession by Danforth. She denies his unfaithfulness in an attempt to protect John’s name, causing his arrest for perjury and witchcraft. This proves that John is trying to do good, yet his misfortunes keep coming, which is another quality that makes John Proctor the tragic hero of the play. T As the play comes to a conclusion, Proctor for a second time has to make a decision concerning his pride.

The court gives him with an ultimatum with which he can plead guilty and live or be hanged with the others who didn’t confess. After speaking with Elizabeth, John decides that he wants to live and surrenders to a confession. After he signs the confession, he tears it up after learning that Danforth means to hang his confession on the church doors. As Reverend Parris and Hale are about to object, John pronounces “… for now I do think I see some shred of goodness in John Proctor… “(133), referring to his honesty. He would rather die for the greater good, then ruin his name and the names of the other prisoners.

Elizabeth doesn’t try to stop him either knowing that he needed to do this, tearfully saying to Hale “He have his goodness now. God forbid I take it from him! “(134). Proctor preserves his pride and dignity, dying as a man with flaws yet a good man, becoming the tragic hero of The Crucible. As the play develops we see that John Proctor is the tragic hero of The Crucible. His flaws destroy him but at the end of the play he preserves his pride and dies a good man. Arthur Miller uses John Proctor to show us how someone can overcome mistakes in life and safeguard ones dignity.

Get a verified writer to help you with John Proctor a Tragic Hero? 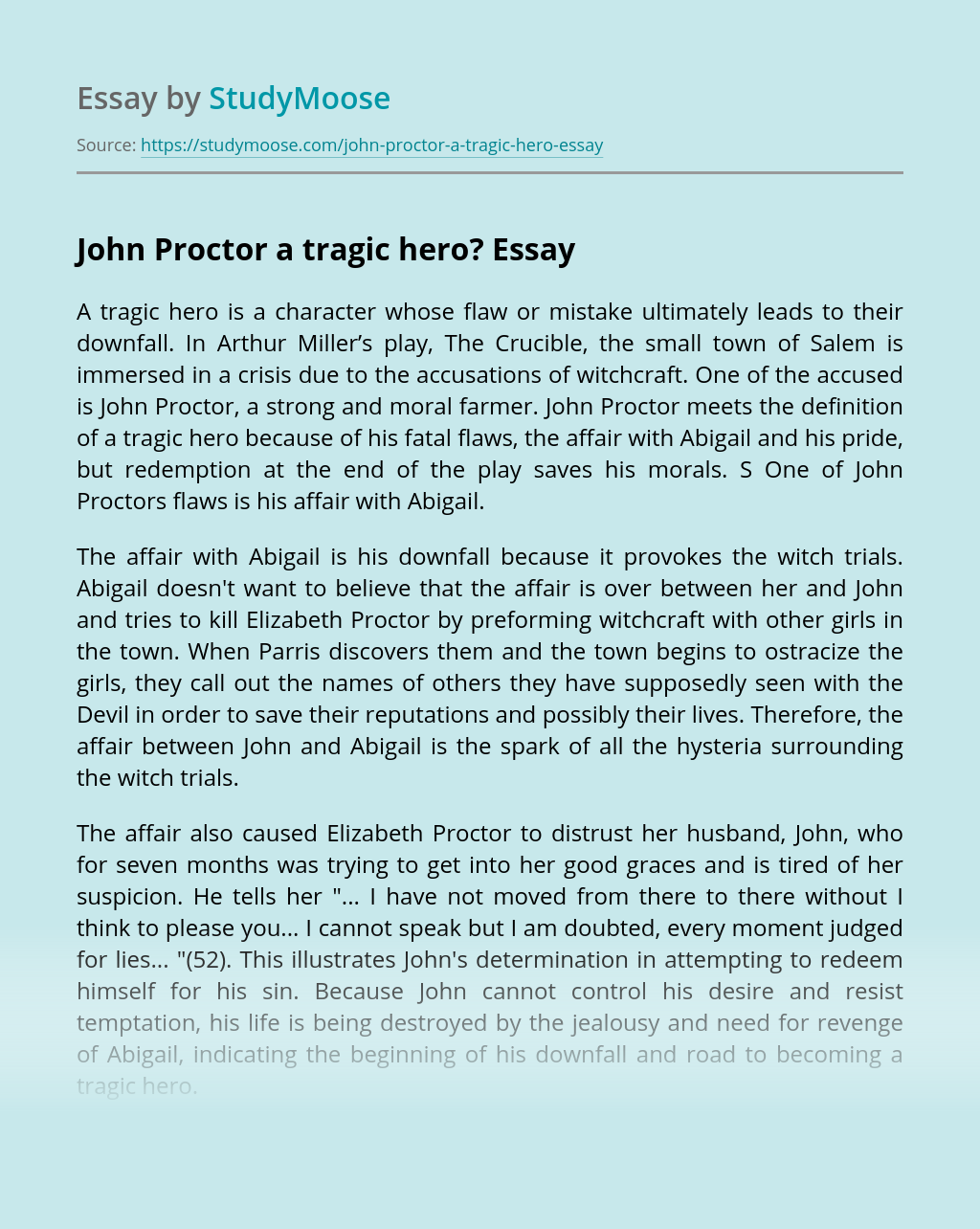 A tragic hero is a character whose flaw or mistake ultimately leads to their downfall. In Arthur Miller’s play, The Crucible, the small town of Salem is immersed in a crisis due to the accusations of witchcraft. One of the accused is John Proctor, a strong and moral farmer. John Proctor meets the definition of...

John Proctor Is a Good Man

Many actions dignify the traits of a tragic hero, but only few stand out. In the tragedy The Crucible by Arthur Miller, a tragic hero dies a good man when brought to trial over nothing more than child’s play and dishonesty. John Proctor is an honest, upright, and blunt-spoken man because he fought for what...

Get Essay
Biographical Analysis of the Crucible

What lies deep down in the Crucible characters that not everyone can see? The former husband of Marilyn Monroe managed to keep one aspect of his life private from the media for over four decades. Was it because of shame, selfishness, or fear? The Crucible is based on the Salem Witch Trials of 1692. Miller...

The Crucible, Perfume, Rhapsody on a Windy Night

How do composers show that belonging can emerge from connections with people, places and communities? In you answer, refer to your prescribed text and at least TWO related text of your own choosing. An individual’s experience of acceptance and inclusion are required values in the human nature where one’s sense of belonging is an imperative...

In Arthur Miller’s play, The Crucible, vengeance plays a major role in the actions of the characters through the witchcraft trials in the Puritan village of Salem, Massachusetts in 1692. Anger, jealousy, rejection, and betrayal all occur throughout the play and are all things that could provoke someone to seek vengeance on someone else. Abigail...

Key part in seeing how the court really works in Salem is after Giles submits an accusation against Putnam that he made his daughter cry witch against his wife because he wants Giles’ land. When Danforth asks for the name of the supposedly honest man who heard Putnam talk to his daughter about accusing Martha...