The epic poem has been regarded ion all ages and countries as the highest form of poetry and there are great epics in almost in all the literatures in the world. As Dr. Johnson has put it, “By the general consent of critics, the first praise of genius is due to the writer of an epic poem, as it requires an assemblage of all the powers which are singly sufficient for other compositions…

Epic poetry undertakes to teach the most important truths by the most pleasing precepts, and therefore, relates some great event in the most affecting manner” (xix).

Don't use plagiarized sources. Get your custom essay on
“ John Milton’s Paradise Lost as an Epic Poetry ”
Get custom paper
NEW! smart matching with writer

John Milton’s Paradise Lost belongs to a rare breed of epic poetry in that it conforms to all the structural aspects of an epic, much in contrast with the decline of epic in the eighteenth century (Griffin 143-154).

In the eighteenth century, the epic conventions made a gradual shift to mock-heroic poetry – a literary form that pseudo-eulogizes events of stately stature, in a bid to satirize them.

But Milton, an egotist throughout his life, picks up topics of profound significance in the context of Christianity, and writes in an epic style that is perfectly complemented by content and theme. This paper is going to analyze Paradise Lost as an epic poetry.

Paradise Lost, which was originally published 1667 in 10 volumes, is written in blank verse – a literary device deployed to convey freedom of expression which is commonly attributed to poems of grand scope. The poem vividly narrates the story of Satan and the Fallen Angels.

Man’s expulsion from God’s abode in heaven is the main theme addressed in the book. If one takes into consideration the binding principle of epic poetry as having some fundamental and simplest of storylines, Paradise Lost qualifies per se. the story of man giving in to temptation and his subsequent fall from divine grace is a recurring theme in many world literatures. Hence, its subject matter is of universal interest. Again, the story is told within a narrative framework which is fictional in nature.

The narrative flow has plenty of drifts when the poet alludes to several biblical and pagan beliefs. But the allusions are very much in keeping with the central theme of the poem – to “justify the ways of God to men” (Milton, I. 26).

The subject matter being dealt with ought to be of a grand scale, preferably some well known tales of heroism and/or defiance of convention. Normally, the subject of an epic is expected to deal with actual historical events or imaginary but probable tales. The action of the story must be developed by a proportionate mix of grand narrative, dialog and soliloquy. Meditative and dramatic elements abound in epic poetry. Hence, the canvas of an epic poetry is structured with minute attention to detail, having periodical digressions relevant to the progression of the storyline.

The protagonist or the hero must not represent the institutional segment of society. In other words, his actions and words should reflect offbeat ideas intended to defy institutional norms. However, the hero should also possess moral transparency and lofty idealism. The story must be based on the hero. The language and other literary techniques should be simple yet profound. One of the rudimentary aspects of epic poetry is that it should always be expressed in a free flowing form, stripped of excesses wherever feasible.

At the same time, the language should never appear as if constrained by the plot. The plot and the narrative must complement each other without limiting the immense scope of each. An epic should always propound a lofty moral, capable of standing on its own. in other words, an epic poem must have a generic message that stands true irrespective of times or ideological differences.

It may be noted that all the aforementioned elements can be found in Milton’s Paradise Lost. In addition to this, the poem also follows classical epic conventions such as invocation to the Muse, prolific usage of epic similes and metaphors, blank versification, repetition of lines and passages, permanent epithets and so on.

The subject matter of Paradise Lost is common yet sublime. The very inclusion of a biblical theme sets the poem apart from ordinary tales of man’s temporal existence. The Fall of Man has a fatalistic attribution to it, which instantly encompasses everything ever created or to be created within Miltonic cosmos.

Milton’s cosmology pertains to a profoundly sagacious vision of the heaven and the earth and how they make exchanges. Satan’s revolt against the Supreme Dictator lays down the premise for an epic rendering of mankind’s perpetual urge to go against norms that put chains on free will. In keeping with epic characteristics, the poem elicits sympathetic responses from readers and critics alike. On one hand, Adam and Eve are thrown out of heaven following their cardinal sin.

The divine providence they would enjoy is no longer there. This puts in perspective the hierarchical notion of the order of beings – God at the helm of affairs followed by the list of created beings. What is of epic stature is that the lower hierarchy suddenly rebels against the highest, challenging the supreme authority in a dauntless manner.

Their punishment is also a part of the development of an epic. Once they are booted off heaven, readers can almost sense that intangible attributes such as immortality and permanence are lost forever. What is born of defiance is what comes to be standing in the long run – man’s original happiness and restoration of peace and love in their reasonable forms. Once Satan and his men are taught a lesson, following the epic conventions, mortals no longer dare to put themselves in any fanciful longing guided by moral cogency.

As far as action is concerned, Paradise Lost unitarily follows a single course of events – all culminating in a grand climax. Milton begins the story by describing the infernal council of the rebel angels, which precedes the Fall of Man. Aspects of epic poetry are rooted in the poet’s approach here. He does not intend to simply narrate the proceedings as they occur.

He stamps his own persona by suggesting the mood for revelry the Fallen Angels are in. Thus, the storyline starts from a single point in time and advances from thereon. Nothing is left behind and nothing is to be seen or apprehended in advance. The battle of the angels and the creation of earth are events that follow from one another and do not occur discordantly. Invocation of the Muse, too, is a generic pattern commonly followed in epic poems (Poplawski 266).

In essence, Milton’s Paradise Lost is typical of epic poetry in multiple regards. The way it deals with the subject matter, with linguistic mastery and in an introspective mood, goes to show the unique niche the poem still enjoys in literary domains worldwide. As an authentic piece of world literature, Paradise Lost excels over contemporary heroic poetry in many ways. Right from the outset, each character has particular relevance to the story and has generic relevance to the entirety of the historical framework the poem belongs to. Such flawless technique renders a stately charm to the poem.       Works Cited 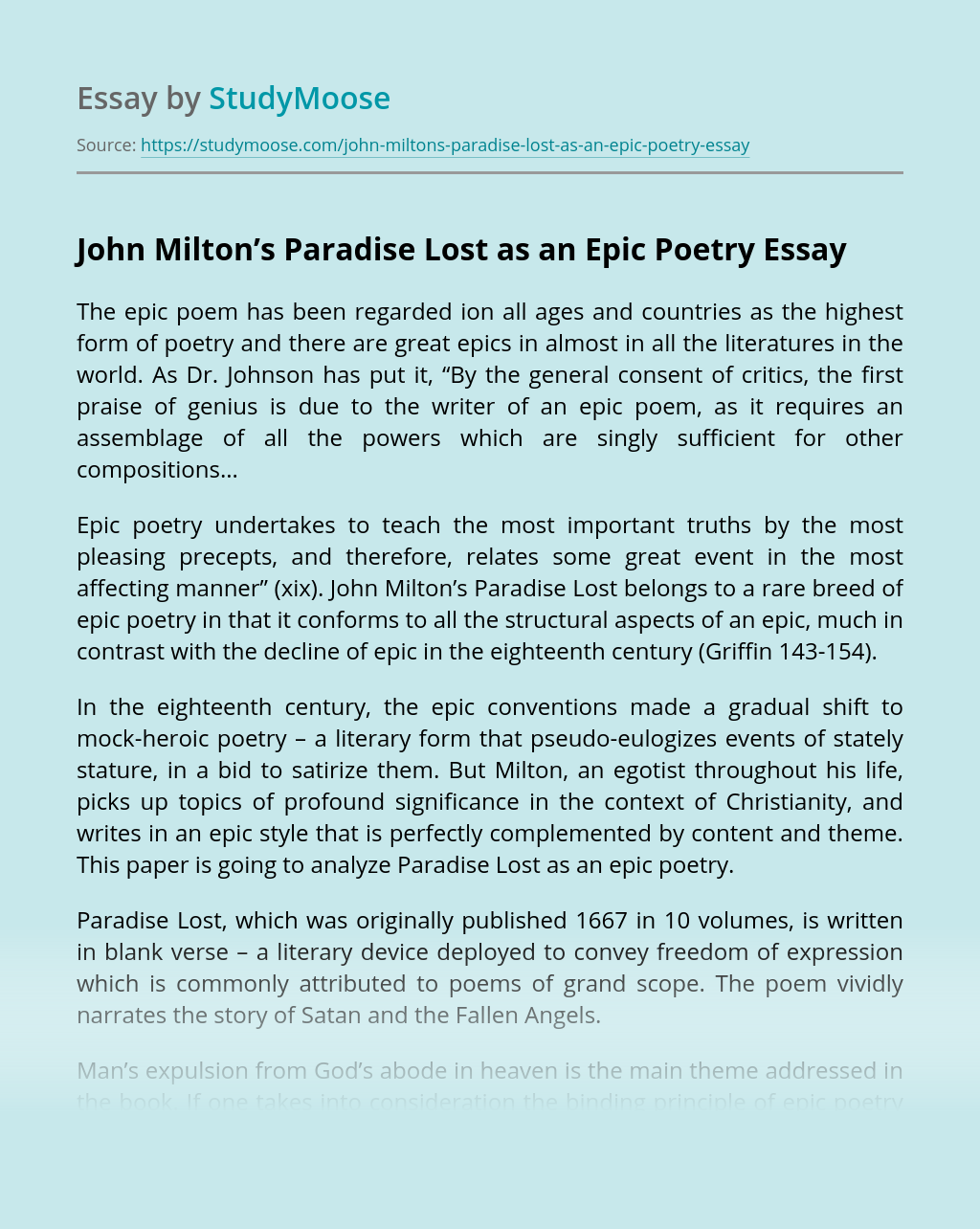