John Keats' Lamia as a Product of Romanticism

The Romantic era, which was the period of time following the Enlightenment, existed to eradicate the idea that innovation, produced from research and reason, was the basis for truth. Writers of the Romantic era, such as John Keats, believed that imagination, not rationalization, was the foundation truth was built upon. Of this Keats says, “The Imagination may be compared to Adam’s dream–He awoke and found it truth” (Rodriguez, Keats, 49). Even though the duration of his life was lacking, Keats must have recognized that some deductions and philosophies had a profound affect on the world.

Don't use plagiarized sources. Get your custom essay on
“ John Keats’ Lamia as a Product of Romanticism ”
Get custom paper
NEW! smart matching with writer

In one of his later poems, Lamia, Keats addresses this question of truth and its application to his concept of Negative Capability.

It is from Robert Burton’s Anatomy of Melancholy that Keats forms the plot of Lamia (Stillinger, 359). A young man Lycius falls in love with the beautiful Lamia, whose body has been transformed from that of a serpent to that of a woman.

Lamia, with little effort, convinces Lycius to flee with her to an enchanted palace, where they live and love happily until they decide to marry. At their marriage banquet Lamia withers and dies, as Apollonius, Lycius’ “sage” and “trusty guide” (II-375), is able to see through her illusion. Lycius also dies, his “arms were empty of delight” (II-307), as his dream is also shattered. Keats multifaceted concept of Negative Capability is best understood as the following:

“that is when man is capable of being in uncertainties, mysteries, doubts, without any irritable reaching after fact and reason.

Directed to a colleague, and perhaps an extension of the previous idea Keats says:

“I am certain of nothing but the holiness of the Heart’s affections and the truth of Imagination–What the imagination seizes as beauty must be truth–whether it existed before or not…” (Rodriguez, Keats, 48)

If imagination is as Adam awoke to find the truth, and beauty is truth and truth is beauty, then Lamia is both beautiful and true. Although the narrator describes her attractive physical qualities as both a serpent and a maid, Lamia is as she imagines herself, which is how she’d like Lycius to imagine her. Regarding Lycius, Lamia “won his heart More pleasantly by playing woman’s part” (I-336-337). Toward the end of the poem, when Apollonius accuses Lamia of being a serpent, her human body starts to deteriorate, as she acknowledges his view. Apollonius, the “good instructor,” “robed in philosophic gown” (I-365), embodies all that Keats’ Negative Capability is working against–the things “known for truth by consequitive reasoning” (Rodriguez, Keats, 51) instead of imagination. Lycius also, in questioning Lamia, “Sure some sweet name thou hast” (II-85), “Hast any mortal name” (II-88), proves his own susceptibility to the narrow truth of rationale.

Although Lamia begins to wither under Apollonius’ stare, it is only when Lycius considers his teacher’s thoughts as truth, that she is actually destroyed. In attempting to define and confine Lamia’s nature to their record of common things, they destroy her imagination–her own perceptions on beauty and truth, “Do not all charms fly at the mere touch of cold philosophy” (II-229-230)? The dream that was Lamia’s, the reason for her to become a woman, was Lycius, the young Corinthian she was in love with. When Apollonius inflicts his philosophy on Lamia, her dream is destroyed, and with it Lycius.

John Keats' Lamia as a Product of Romanticism. (2016, Jun 20). Retrieved from https://studymoose.com/john-keats-lamia-as-a-product-of-romanticism-essay 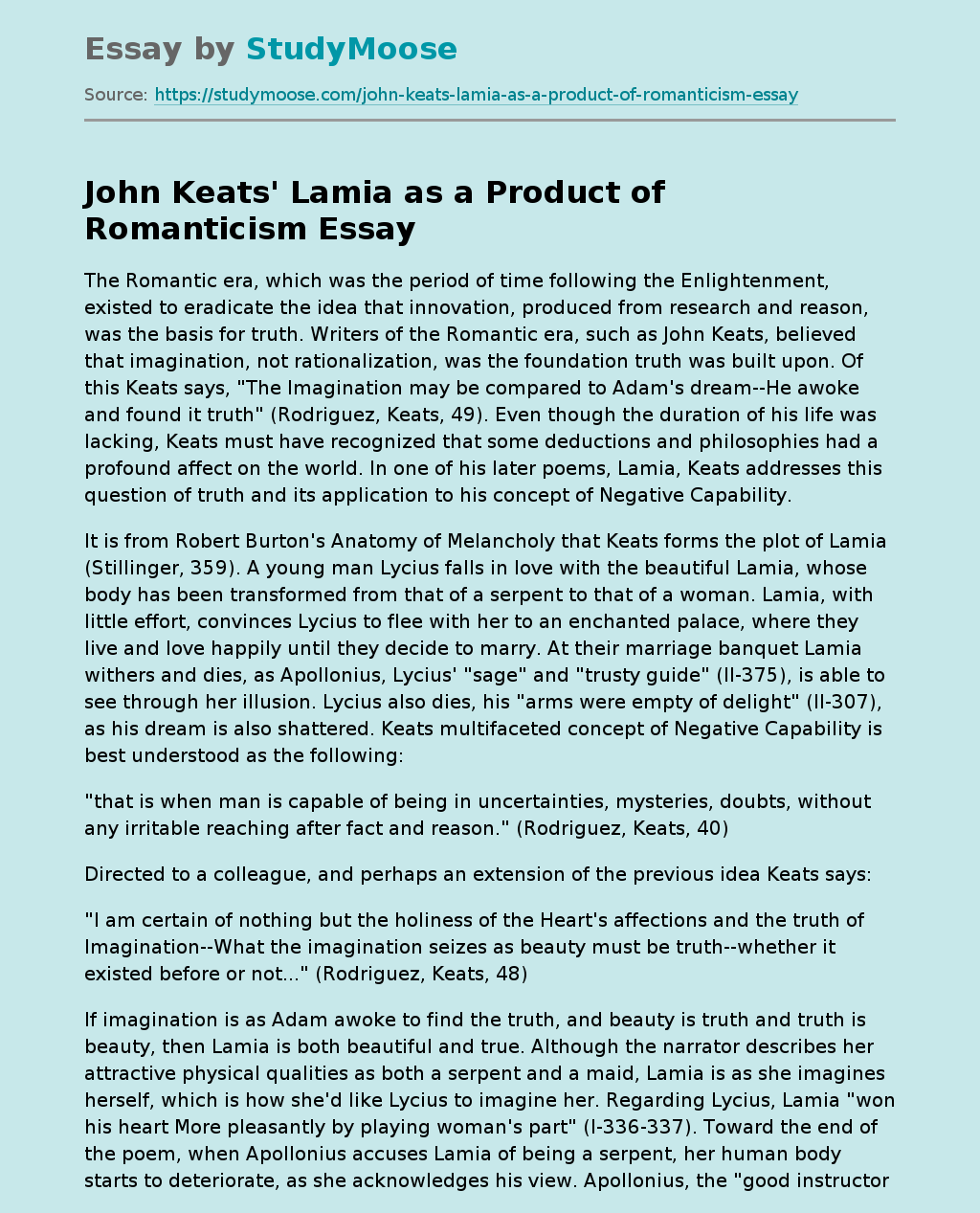