A biography of the short story author, John Griffith London that is written in the first person.

“Let me put this heavy load down and take some of these bulky clothes off and I’ll tell you about how I became a short story and novel writer. My name is John Griffith London. But I like to be called Jack. I was born in San Francisco in 1876. Most of my childhood I was very poor. I had to help my parents earn a living by doing odd jobs.

Don't use plagiarized sources. Get your custom essay on
“ John Griffith London ”
Get custom paper
NEW! smart matching with writer

I delivered papers, worked on ice-wagons, cleaned up bowling alleys, helped in the cannery and only made ten cents an hour. I usually worked ten hours a day. I learned what it was like being a member of the working-class and I always had a distaste for its drudgery. I kept telling myself, “Jack, some day you will be rich.” I loved to read and often borrowed books of adventure, travel, and sea voyages.

At fourteen, I left school to lead a wandering and adventurous life, so I thought. Jobs were hard to find but I was employed by the fish patrol in San Francisco Bay.

Imagine hopping on every boat that pulls into the bay and counting the number of fish on board and having to write fines to the sailors that had too many fish. This sure wasn’t a popular job in the bay area. I was smart enough to figure I could be on the other side of the law and rob and steal vessels so I became an oyster pirate.

I had a real passion for the sea and so in 1893 I took a job as a common sailor aboard a sealing vessel that ventured as far as Japan. This lasted about a year. When I returned back to the bay area I drifted from job to job. I told you I liked to wander. I left the bay and headed for New York City. I went on the road and lived as a tramp. Without any place to stay I was soon jailed for vagrancy. I spent one month in jail and there I realized I needed to make something of myself. I returned to California and to school. My reading continued. Rudyard Kipling and Robert Louis Stevenson became my literary gods and Darwin, Herbert Spencer, and Karl Marx made me a Socialist. I began writing while in college but could not find a market for my writings. In the mid-1897’s I joined the Klondike gold rush. I packed 8,000 pounds of supplies and books to take with me. After a year I became very ill and had to return home without having mined an ounce of gold. Upon my return to the San Francisco area, I began to write about my experiences. My stories finally began to be accepted by magazines.

My first collection of short stories, The Son of the Wolf, was bought and published in 1900 by Houghton Mifflin for $500. I was so excited to have made money from my writings, I devoted every minute to telling my colorful life. I wrote more than 50 books and made more than a million dollars on them. My first best selling novel was The Call of the Wild. In this novel I included my adventure of the Klondikes. The story dealt with the reversion of a civilized creature to the primitive state. On assignment to cover the Russo-Japanese War I was stranded in London and lived in the poverty-stricken East End. I gathered materials for my novel, People of the Abyss. I became popular outside the United States and my works were translated into eleven languages. My dream had become a reality. I was now very wealthy. I built a fantastic castle but had to write incessantly to meet my bills. I wrote The Sea Wolf based on my experiences on the sealing vessel. John Barleycorn became a novel about my struggles with alcoholism. My style-brutal, vivid, and exciting was set in localities where the struggle could be most obvious: in the wilds of Alaska, on remote Pacific Islands, on ships at sea, in industrial communities during strikes, and in the underworlds of various cities. These were the places I recounted my experiences. My life was very stormy. I had two unhappy marriages, a problem with alcohol, a fire that destroyed my castle before it was finished, and many bills to pay. So at the age of 40, I ended my own life.” 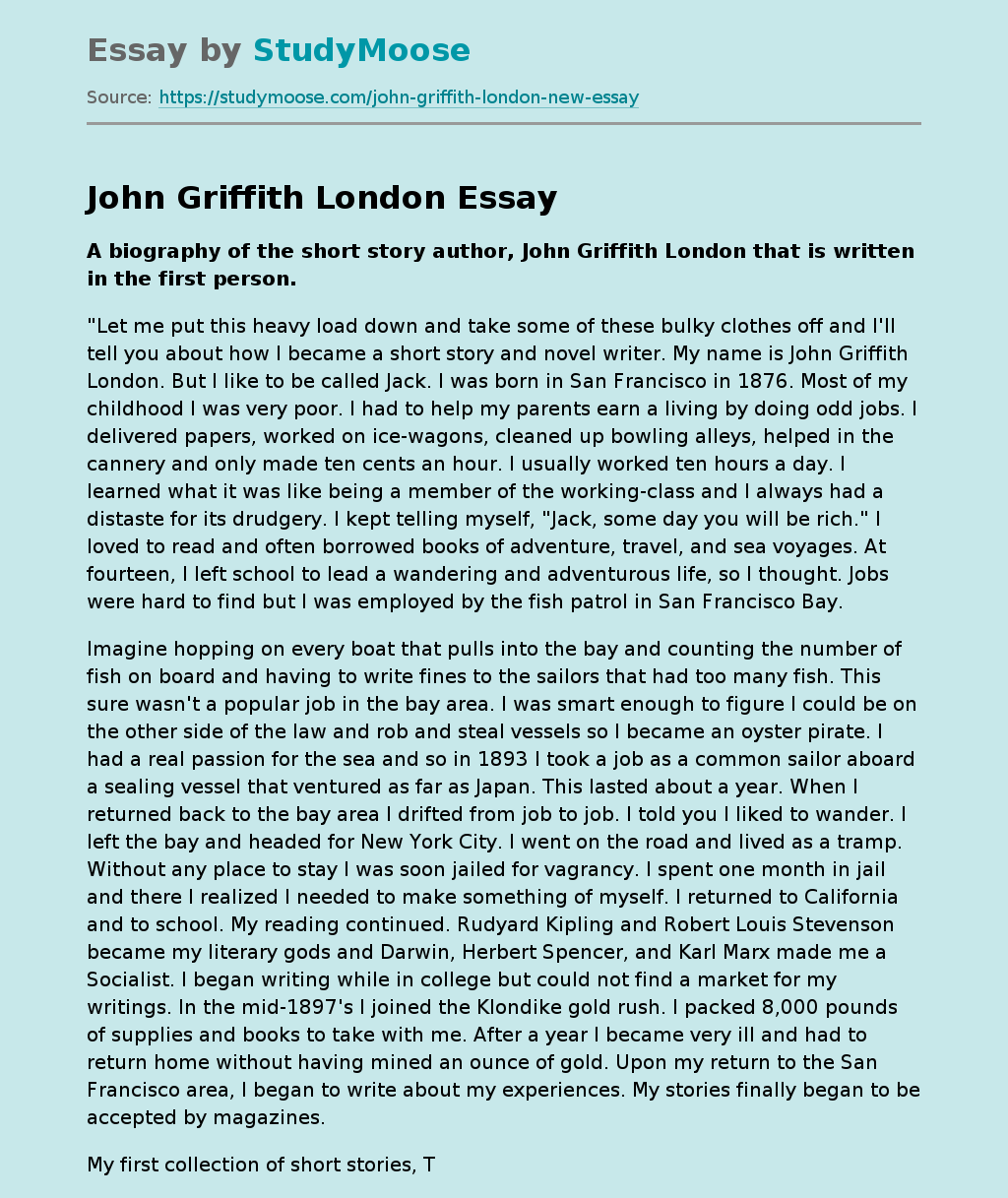