Don't use plagiarized sources. Get your custom essay on
“ Jim Hawkins: A Young Pirate ”
Get custom paper
NEW! smart matching with writer

He pursued engineering first followed by law; however his interest was never in either of those.

He was fond of reading and travelled many places before he became a famous writer (“Treasure Island: About the Author”). The story about Treasure Island is narrated by Jim Hawkins. He tells the story based from his observations, feelings, perceptions, and on how he responds to the people and events around him. He became easily involved in the pirate game and treasure hunting since his family owned the Admiral Benbow inn.

There stayed Billy Bones, the captain who has the map of the treasure that Captain Flint buried.

Captain Flint is already dead however the men who worked for him are still alive and searching for his buried treasure (“Treasure Island: Character Profiles”). The first pirate that Jim met is Billy Bones who stayed at their inn. Bones is a ragged, scarred, and drunkard pirate who always sing a pirate song; but he was kind with Jim. He always asks Jim to look out for any seafaring men along the shore which Jim thought that the man only wants some company.

However, it turned out that the man is eager to avoid the other seafaring men especially the ‘seafaring man with one leg’ (“Treasure Island”).

One day, another pirate named Black Dog, a companion of Billy Bones, came to Jim and asked for the whereabouts of Billy Bones. Both pirates wrestle until Bones is greatly injured. However, a blind pirate named Pew came with horsemen to Bones and delivered the ‘black spot’. After Bones died, Jim snatched a key and an oilskin packet from Bones. He and his mother left immediately and went to the next village. The village people, however, are not willing to help them and the two hide under the bridge. The men continuously searched for the “Flint’s fist” but they could not find it.

They escaped leaving Pew behind while the horses of the revenue officers from the village trampled him to death (Nelson). Jim and his mother stayed with Dr. Livesey and Squire Trelawney where the squire analyzed the packet that Jim got from Billy Bones. The squire said that it is the account book of the ‘black-hearted hound’. After studying the rest of the oilskin packet, they found a map of Captain John Flint’s Treasure Island. Trelawney became eager to find the treasure and planned the rest of the voyage including the finances.

He secured on of the best ships in England, the Hispaniola, and hired several men including a one-legged ‘seafaring man’ named Long John Silver and a group of sailors. Jim unexpectedly became part of the instant adventure (Nelson). Long John Silver was very much liked by Jim and the squire because of his performance as the ship’s cook. At the beginning of their journey, he is friendly and helpful to the rest of the crew however he is as notorious as Captain Flint who is concerned only about the money he can get (“Treasure Island: Character Profiles”).

Jim, while hiding in an apple barrel, accidentally overhears Silver, Israel Hand, and Dick talking about their plan of overtaking the ship once they get the treasure. After getting on land, Captain Smollet together with his men fought with Silver and the pirates. Jim and his group escaped together with Ben Gunn, one of the original members of Captain Flint’s crew who was abandoned in the Treasure Island three years ago. Jim together with his group is lead to Gunn’s secret cave where he relocated Captain Flint’s treasure.

In spite of Silver’s plan, Jim, Trelawney, Dr. Livesey, Gunn and the rest of the group are able to retrieve the treasure and haul it to Hispaniola and return to England (“Treasure Island”). Treasure Island is an exciting book inspired by adventures of notorious pirates. During the early 1700s, thousands of pirates wander along different seas in the world who plundered ships and private vessels for coins and precious metals that were likely hidden in small islands. This perhaps is one of the sources of Stevenson’s pirate stories.

However, most of the pirates began in their early twenties until they age fifty or so, some crippled, blind, or dead. Young pirates were also common, but there were no enough records to prove that teenagers became fierce pirates. Young pirates like Jim Hawkins is like a dream come true for kids who always dream of sailing and travelling and someday finding a treasure (“Treasure Island”). In the early 18th century, there was a story about a young boy who joined a group of buccaneers. The story was based from the records of Captain “Black Sam” Bellamy.

In 1716, Captain Bellamy’s ship Marianne attacked Bonetta, a ship travelling from Antigua to Jamaica. Some of Bonetta’s crew joined the pirates. John King, a kid travelling with his mother, also wanted to join the group of buccaneers so bad that he even threatened to kill himself after the captain did not allow him. It was not clear why John wanted to become a pirate, but there were speculations that maybe he was with a harsh parent or he does not want to go wherever they are going. Later, a kind a charismatic Captain Bellamy allowed John King to join the band (Krystek).

In connection with the story of John King, a treasure hunter named Barry Clifford searched for the remains of Captain Bellamy’s boat – Whydah that sunk along Cape Cod. He found a cannon, artifacts, and silver coins. The artifacts they found included a human leg bone, a stocking, and a shoe belonging to a tiny adult, as he said. However in 2006, after the bone was examined in The Center for Historical Archeology in Florida, they found out that the bone belonged to a child aged between eight and eleven years old. The tale of a John King, a little boy who turned into a young pirate indeed was true (Krystek).

In the early chapter of Treasure Island, the story was established through the first person narrative of Jim Hawkins. Money is introduced as the major driving force of the characters’ actions. Through Jim’s narration of events, greed and corruption are even more highlighted. As the number of pirates looking for the map increases, it pushes Jim into learning more about the treasure and acquiring the map. The first six chapters slowly unravel Jim’s transformation. He is now not controlled by Billy Jones and the other pirates and he chooses to stand with his mother and save her.

He is beginning to take part into the action happening and acted like a hero (Nelson). In the middle chapters, more terrible things happened which challenged how Jim would respond. Jim has witnessed several deaths including Billy Bones’ and Tom’s. However, his response to the death of Tom’s death is different from Billy Bones’. He cried at Bone’s but not to Tom’s death where he just sat in silence. Upon arriving at the island after all the terrible things that he witnessed, Jim found a friend and a father figure whom he has gained trust (Nelson).

At the later chapter, Jim is able to develop both physical and moral strength after their triumph against the pirates. Jim is able to survive and gain enough guts to face Silver and his crew and help his crew. He has matured and does not act like a child in the middle of the events. Jim is a child and adult in deciding and justifying the things he did. He is now acting not just to save himself but also the rest of his crew after he stole and find a boat. He became the story’s hero but not because of luck and fortune. Also, Jim does not forget how to be adventurous and try things despite failure.

He never gives up although he is now engaging to wrong choices, these are justifiable by the arbitrary death that could happen anytime (“Treasure Island: Character Profiles”). Throughout the story, Jim Hawkins character changed from a simple observer of the events around him into a character who became actively involved and became a certified pirate. Even though he is just a kid, he is able to help in uncovering the mutiny plan of Long John Silver and retrieve the treasure. He became a competent boy physically and beat Israel Hands.

He has grown morally mature after choosing not to run away from Long John silver despite Dr. Livesey urging him to. Jim is a smart boy with courage and good heart. Anyone reading the book could easily identity himself with Jim. Stevenson created it in such a way the reader could put his own imaginations in place of Jim. Jim Hawkins is an open, predictable character who narrates the story by telling what he sees and observed, but is close in telling his own feelings and thoughts about the other characters (Nelson). The transformation in Jim’s character was evident when he delivered a speech to the pirates.

He is able to survive and save himself against the fierce pirates by offering deals that an adult would usually do. His courage has developed from their journey, a courage that he does not have back to the inn. An interesting encounter between Jim and Long John Silver once proved Jim’s ability to stand up and fought for himself even though it is Silver, a notorious pirate, he is talking to (Nelson). Jim Hawkins justifies the thoughts and imagination of a teenager and later the beginning stage of maturity developed from the combination of different adversities.

The story of Jim Hawkins and the Treasure Island is not as exciting as it is when summarized because there is no other of telling his story in such an engaging way except reading all the chapters. 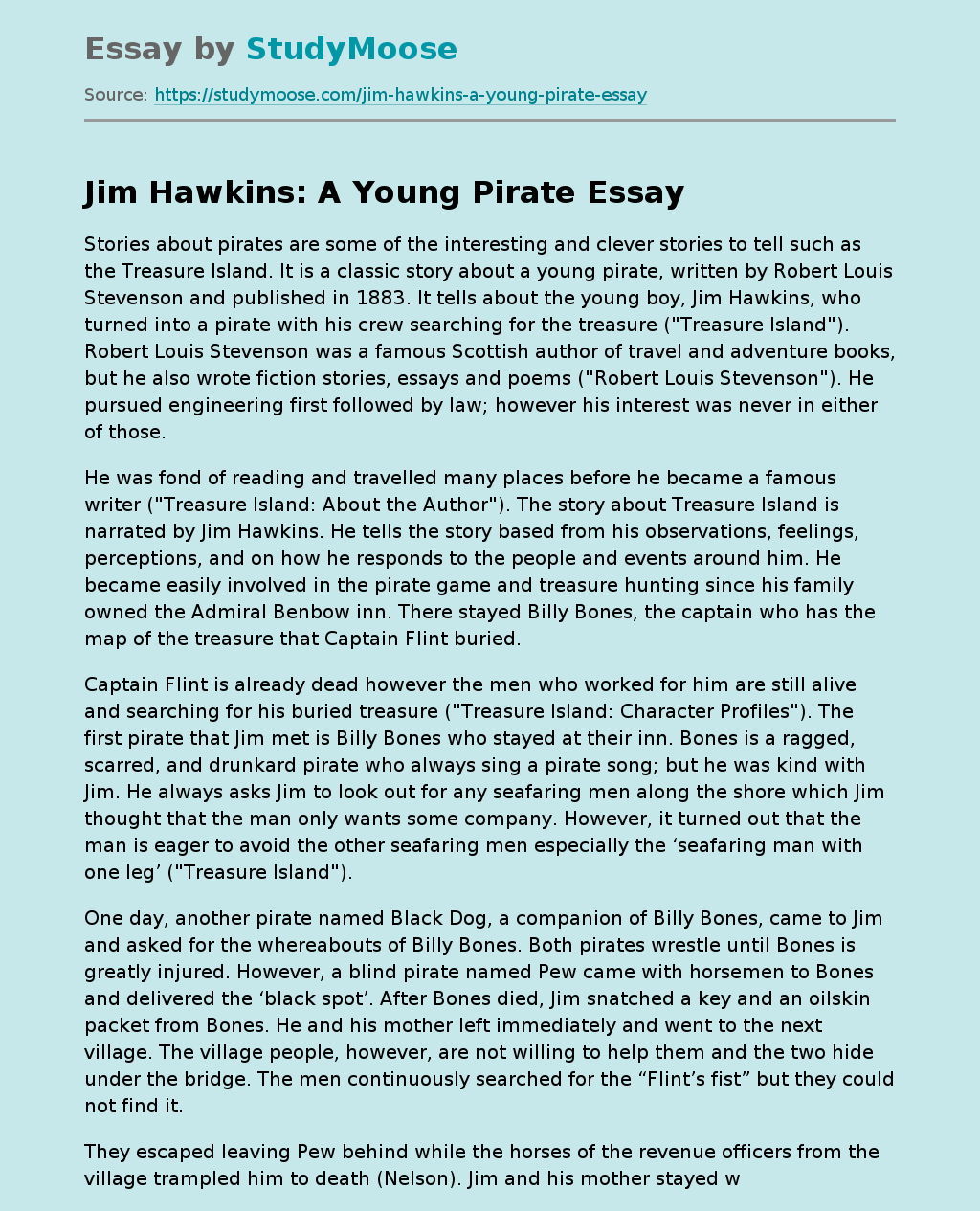