1) What forms the foundation of the relationship between the two characters your group has been assigned? (Think about the ties they have with one another, how are they drawn to one another etc.)

There is familial love between Jessica and Shylock but Jessica is unfilial. The quote ‘To be ashamed to be my father’s child’ (2.3.16) shows that Jessica detests her father to the extent of being ashamed to be related to him. However, Solanio heard Shylock shout in the streets ‘ My daughter’(2.

8.15) after he found out that Jessica left him with a Christian. This shows that Shylock cared about his daughter and loved his daughter so much that he was so overwhelmed with grief when she left that he shouted out loud in the public regardless of his image and reputation in the town.

Thus, there is a one-sided love from Shylock to Jessica, Jessica does not appreciate Shylock’s love by being ashamed of him as well as running away from him which also shows that she is unfilial towards her father.

2) Does Shylock love his daughter? Explore how he appears to transform from a mere grumbling man to a malicious Jew. Is it purely out of spite towards Antonio?

Jessica’s selfishness caused Shylock to be a malicious Jew. Jessica disregards her father’s feelings towards her elopement. She only thought about escaping her controlling father and her ‘house is hell’ with Lorenzo, gaining the freedom that she wanted. This implies that Jessica is selfish, she ignored the possible outcomes and consequences of her actions and carried on with her selfish plan to elope with Lorenzo, a Christian, when she could think about alternative methods to change her father and his hate for Christians.

Moreover, Jessica shows complete disregard for her father by saying ‘ I have a father, you a daughter lost’(2.5.16) as she did not spare a thought about the disappointment her father will feel and the loneliness he would have to face without his wife and daughter by his side.

Therefore, Jessica’s selfishness caused Shylock to be a malicious Jew by escaping with a Christian and arousing Shylock’s anger and hate towards the Christians
resulting him to want to get revenge against the Christians for causing him to lose his only daughter.

3) How has this relationship changed/progressed/deteriorated throughout the play.

Jessica and Shylock shared a rocky father daughter relationship. Before Jessica eloped with Lorenzo, Shylock showed Jessica care by being a controlling father who applied rigid rules from the Jewish religion in their family, this is shown by the way Shylock treats Jessica. From the quote ‘Do as I bid you. Shut doors after you’(2.5.51) it shows how controlling Shylock is to his daughter, Shylock not only wants to lock up his daughter to the world he also doesn’t want Jessica to experience Venetian society, and Jessica shows her resentment towards her father when she said ‘ I am daughter to his blood but not to his manners’ (2.3.17).

Furthermore, after Jessica left, Shylock had began to hate her daughter for leaving him with a Christian and stealing his money, ‘Justice,find the girl’(2.8.21) and ‘I would my daughter were dead at my foot’(3.1.75) shows that he wants his daughter to be caught and to be reported to the police or better yet dead so that his riches that were stolen could be returned to him , but, regardless of what happened he still acknowledge Jessica as his daughter and cared for her marriage when he said ‘I have a daughter’(4.1.292) and ‘ any of the stock Barabbas had been her husband rather than a Christian’ this implies that he wanted his daughter to marry a man whom he thinks is good not someone like a Christian who looks down on Jews which shows that he cared for her.

2.3: Jessica passes the letter which she wrote to Launcelot asking him to pass it to Lorenzo. 2.5: Shylock tells Jessica that he would be going to supper with some of the Christians and ordered her to lock up the doors as he does not want her to go out. Shylock nearly found out Jessica’s plans to elope when Launcelot gave her the instructions from Lorenzo. 2.6: Jessica elopes with Lorenzo, stealing her father’s money and jewels. 3.1: Shylock hears about Jessica wasting his money and also about her selling his precious ring that his wife gave him before they were married. 4.1: Shylock was upset as he felt that his daughter was stolen from him by a Christian and that she could have married a better Jewish husband. 4.1: Shylock converted to Christianity and agreed to leave his wealth to his daughter and her husband. 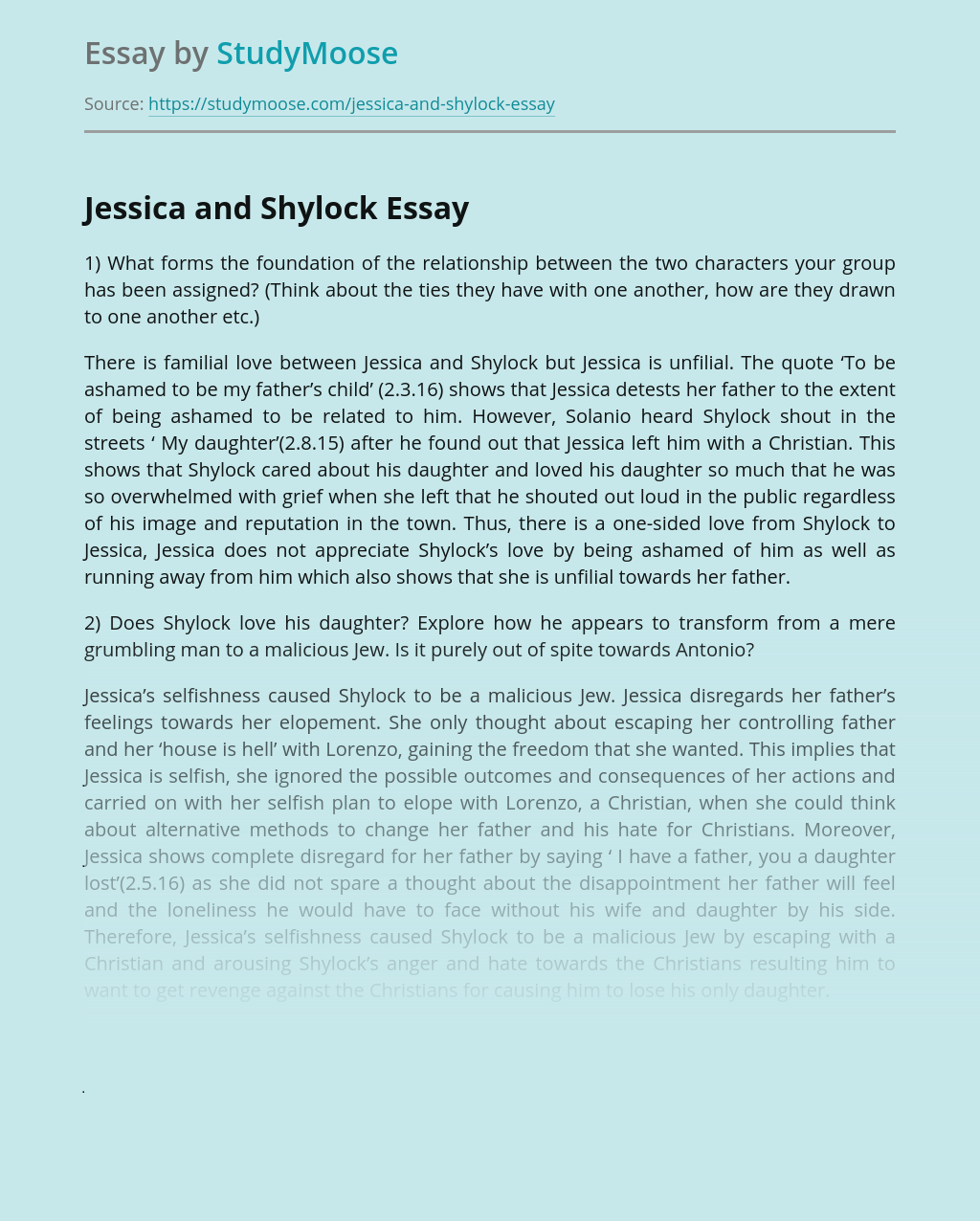 Don’t waste time
Get a verified expert to help you with Parents and Children Relationship
Hire verified expert
$35.80 for a 2-page paper
Stay Safe, Stay Original