Jem and Scout in "To Kill a Mockingbird"

Lawrence Kohlberg developed six culturally universal levels of moral development that can be applied to To Kill a Mockingbird. This book tells a story of the children growing up and their lives changing so we can observe the ascension of them through morality levels and the events that cause or show this. The main characters of this book were Jem and Scout who we first meet with morality levels 0 to 1. It is their experiences which cause them to ultimately arrive at a high level of morality and exhibiting characteristics of level 6.

Don't use plagiarized sources. Get your custom essay on
“ Jem and Scout in “To Kill a Mockingbird” ”
Get custom paper
NEW! smart matching with writer

Early in the story Jem and Scout act with a level of 0 and 1 in my opinion for many reasons. The first indicator is their bluntness when they first met Dill. They don’t meet a whole lot of kids their age except at school for Jem, so when they talk to Dill they don’t show a lot of tact by outright asking him about things like his father. They are guided by what they want and not by others.

Another is when Scout “beats up” Walter because he gets her in trouble so her motivation is based on consequences and she doesn’t have a real sense of others feelings but Jem starts his growth already as he invites Walter to eat with them.

Jem has already started to grow and scouts begins to get a notion of fairness and what is right when she is condemned by her teacher for knowing how to read. This doesn’t make sense to her because she can read, which she thinks is good, but her teacher gets mad.

Jem defends the teacher by saying she’s trying a new way but scout and Jem both know that it’s a good thing to read. This is the start of Scouts growth because Kohlberg believes that events shape the morality level and it is natural to ascend these levels as you grow. One of the big things that helps form the children’s morals throughout the book is Boo Radley. The children play games that portray their beliefs about Boo but Atticus scolds them for this and they might start to see him in a different way.

Once they are in the middle of a thing at night and Jem loses his pants on the fence, when he goes back to get them the pants are mended and he is at first bothered by this. I think that this is the first time Jem realizes that Boo isn’t only the character that they see him as. He fixes the pants so he may even care about the children. Another thing that shows that he cares is when he covers the children with a blanket. Scout still seems afraid but I think she sees that he might not be such a monster and that he was kind to them.

One of the biggest themes in the book was also one of the events that definitely changed the way Jem saw things. When they are told to never kill a mockingbird Jem understands that your actions affect people and u have to think. If somebody helps you it is a sin to do anything to hurt somebody or something like that. Later on we see that Scout got some of the meaning but has to be reminded by Jem not to harm things without reason, this is why we know that Jem is rising through the levels.

I think that it is hard to classify them by the end but they definitely do display level six characteristics. We can see this realization when Scout and Dill talk to Mr. Dolphus Raymond. Scout understands that it wouldn’t be socially acceptable and that society isn’t right to judge people like it does. She learns that injustice can happen all the time like Jem then does. He sees this in the conviction of an innocent man. Everyone knows that Tom Robinson did not do anything but because of social status he was condemned. Jem is distraught and shows that he knows this is wrong and that it was not right logically or morally to convict Tom Robinson.

Scout show high morals at the end in seeing the hypocrisy in the town’s views on democracy and the racism. Scouts final realization of morality comes when she knows that it is Boo Radley who saved her and Jem. She sees that he is a man and that people shouldn’t be judged no matter how different. It is Boo who ultimately shows her this. Something I found interesting was that scout and Jem both achieved a high level long before the should have but it supported that life experiences shape a persons morals and even youth can have a high grasp of what is right and wrong.

Jem and Scout in "To Kill a Mockingbird". (2016, Jul 22). Retrieved from https://studymoose.com/jem-and-scout-in-to-kill-a-mockingbird-essay 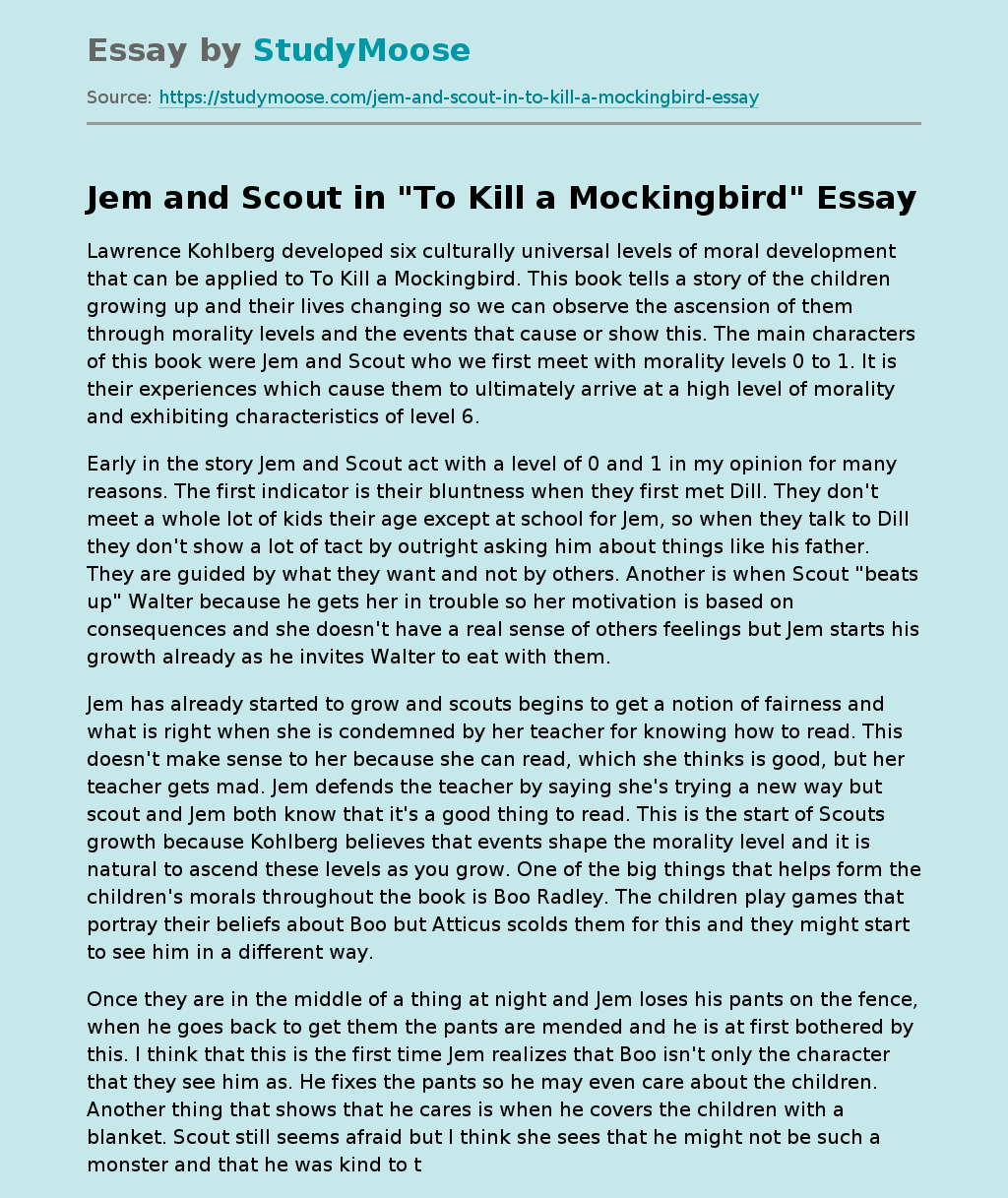