“Until then, when I thought of writers, what first came to mind was Mom, hunched over her typewriter, clattering away on her novels and plays and philosophies of life and occasionally receiving a personalized rejection letter. But a newspaper reporter, instead of holing up in isolation, was in touch with the rest of the world.

What the reporter wrote influenced what people thought about and talked about the next day; he knew what was really going on.”

In seventh grade Jeannette Wells, is the first person her age to work for the school newspaper called, The Maroon Wave.

Don't use plagiarized sources. Get your custom essay on
“ Jeannette Wells The Writer ”
Get custom paper
NEW! smart matching with writer

She seeks out, The Maroon Wave, as a place where she can belong to herself, without worrying about people teasing her for being poor or criticizing her parents. During her work with the school newspaper Jeannette discovers what she wants to do with her life and what she later ends up doing: journalism. It is important that she not keep her work to herself or experience it alone, like her mother, but rather that it exists as a dialogue between her and the rest of the world. Jeanette uses The Maroon Wave as almost a personnel journal and she is the only one that can write in it. The passage is revealing the concept that Jeanette love to write and has a passion for the idea of writing, and now she has the chance to truly express her personal thoughts and ideas in the school newspaper on anything she wants. This opportunity has given Jeanette the chance to see herself as a true writer and not just her mother and to reveal her passion to other people.

Jeanette hoped that this newspaper, The Maroon wave would give her the chance to influence the ideas of others and share her feelings.

“If you don’t want to sink, you better figure out how to swim.”

Rex teaches Jeannette how to swim by literally forcing her to sink or swim. He repeatedly throws her into a sulfur spring in the desert, rescuing her when she sinks only to throw her back in again to hope that she learns from her mistakes through trial and error of failing to swim for her life, and accomplish how to swim. Using these methods, Rex is able to train Jeannette to paddle and swim in order to avoid being thrown back into the water. Rex believes that continuing this method will force Jeanette to think more intelligently, and swim properly to survive from drowning. This strategy is representative of Rose Mary and Rex’s general approach to parenting. Refusing to coddle their children, they often present them with challenges, some life threatening, that the children are forced to handle. This was an approach to teach their children how to be tested to their limits and think in crisis situations. Through the act of throwing her into the water repeatedly, Rex hopes that Jeanette will understand through repetitive mental and physical stress to figure out how to accomplish the art of swimming. This scene is significant to the characterization of the family because it shows the parenting style of Rose Mary and Rex, and shows symbolism of learning from your mistakes. The authors words used in this passage support a main idea to the reader, because it is showing the teaching and parenting style of Rex Wells onto his daughter. The words are simply showing that Rex is not willing to teach Jeanette but she must work to swim.

“I wondered if the fire had been out to get me. I wondered if all fire was related, like dad said all humans were related, if the fire that had burned me that day while I cooked hot dogs was somehow connected to the fire I had flushed down the toilet and the fire burning at the hotel. I didn’t have the answers to those questions, but what I did know was that I lived in a world that at any moment could erupt into fire. It was the sort of knowledge that kept you on your toes.”

After the hotel where the Wells family is staying in burns down, Jeannette begins to think that fire is a recurring part of her life, but as a symbolic devastation. She believes that her encounters with fire are all connected and impacted by each other. Most importantly, she realizes that her life is unpredictable and her status transient do to the unfortunate reality of her lower class. Jeanette starts to have this idea that the fires that keep recurring are signs of distress and signs that her life is nothing more than poverty. Fire is sudden and damaging and capable of changing the trajectory of one’s life in an instant. Jeannette’s early experiences with fire foreshadow the combustive events to follow in her life. The fire at the hotel, really shows a breaking point for the Wells family because now they have nowhere to go, and it just shows that even when you think you have absolutely nothing in life, the world still finds things to take away from you. The writer in this scene depicts a tragic moment for the Well family, where it really explains the devastation of the Wells and how the reader can really understand the emotion of Jeanette.

“Mom frowned at me. ‘You’d be destroying what makes it special,’ she said, ‘It’s the Joshua tree’s struggle that gives it its beauty’.”

When Jeannette devises a plan to right the Joshua tree which has grown sideways in the direction of the constant wind that passes over it, Rosemary does not like the idea. Rose Mary claims that the tree is beautiful not because it grows straight like the other trees, but rather because its struggle defines it and makes it unique. I believe that during this moment between JEaneete and Rosemary, Rosemary is explaining to Jeanette that it’s not beautiful for how it looks but because of its story, hoping that Rosemary will convey a message of symbolic meaning that the Wells family isn’t special for how they look but because of their journey and how hard they work to be like the average family. Rose Mary is typically unwilling to tamper with nature and she is particularly drawn to the unique form of the Joshua Tree. Through the figure of the tree a young Jeannette learns an important lesson about nonconformity. The author in this passage and this scene reveals a beautiful moment between Mrs. Wells and Jeanette because Rosemary is explaining that beauty is from within not from what they eye sees, and the writer reveals that symbolism for the Wells family.

“After dinner the whole family stretched out on the benches and the floor of the depot and read, with the dictionary in the middle of the room so we kids could look up words we don’t know…Occasionally, on those nights when we were all reading together, a train would thunder by, shaking the house and rattling the windows. The noise was thunderous, but after we’d been there a while, we didn’t even hear it.”

This scene depicts one of the few peaceful, bonding moments shared between members of the Wells family. Not coincidentally, the family bonds around literature and reading. The importance of this scene shows that the Wells family does not comply with the stereotype of a lower class family. The scene debunks stereotypes about the homeless being uneducated or dumb and shows that even those without means and the luxury can be educated. Secondly, it shows how Jeannette becomes influenced at a young age by the written word and is a possible explanation for her later interest in journalism. It is the parents’ literary bent that ultimately helps the children, by giving them an education that allows them to escape their parents’ life of poverty and the Wells parents are trying to reveal a better future for their children.This scene explains that even though the Wells family lacks the resources to have the proper school education, that doesn’t stop them from continuing their learning through constant reading. This quotation with the Wells family explaining how well read and educated they are even though they lack the resources to be “properly educated” through the school system is connected to the text because it shows the lifestyle of the Wells family yet they make it into a positive thing by not letting that stop their education. These specific sentences used in the passage are extremely important to the meaning of the text because they show that the Wells family are educated. These phrases are being used as points to understand that the Wells family educated themselves without having the money and resources for proper school.

“Situations like these, I realized, were what turned people into hypocrites.”

Jeanette said this after a fight with Erma in Welch while they were living with her. She had been fed up with Erma’s use of the “n” word, but after she tries to voice her opinion, her parents tell her to bite her tongue, something they had always been against. Rex and Rosemary told Jeanette to simply not respond to her grandmother’s racist comments because it would just complicate the situation of the Wells family. The family did not have any other options or anywhere else to go, so this turned them into hypocrites. This is crucial to the work and characterization because it shows how desperate the family was to stay with Erma, and how her parents often did not stick to their word, and would often alter their beliefs to their own benefit. Jeannette stands up to her grandmother, Erma, when she questions Jeannette’s friendship with a African American classmate. When Erma gets angry, Jeannette is surprised that her parents, Rex and Rosemary, aren’t more supportive of her bravery in countering authority, because of their belief of anti racism. Rex and Rose Mary are less concerned about Jeannette learning nonconformist practices because they are afraid thatErma will kick them out having no place to go. As a result, they chastise their daughter for angering her grandmother, just to humor Erma, and to notify Jeanette that they have nowhere else to go and that Erma is the only family they have to give them a home. After this incident, Jeannette realizes that even her parents can be forced to conform if the consequences of rebelling are severe enough. 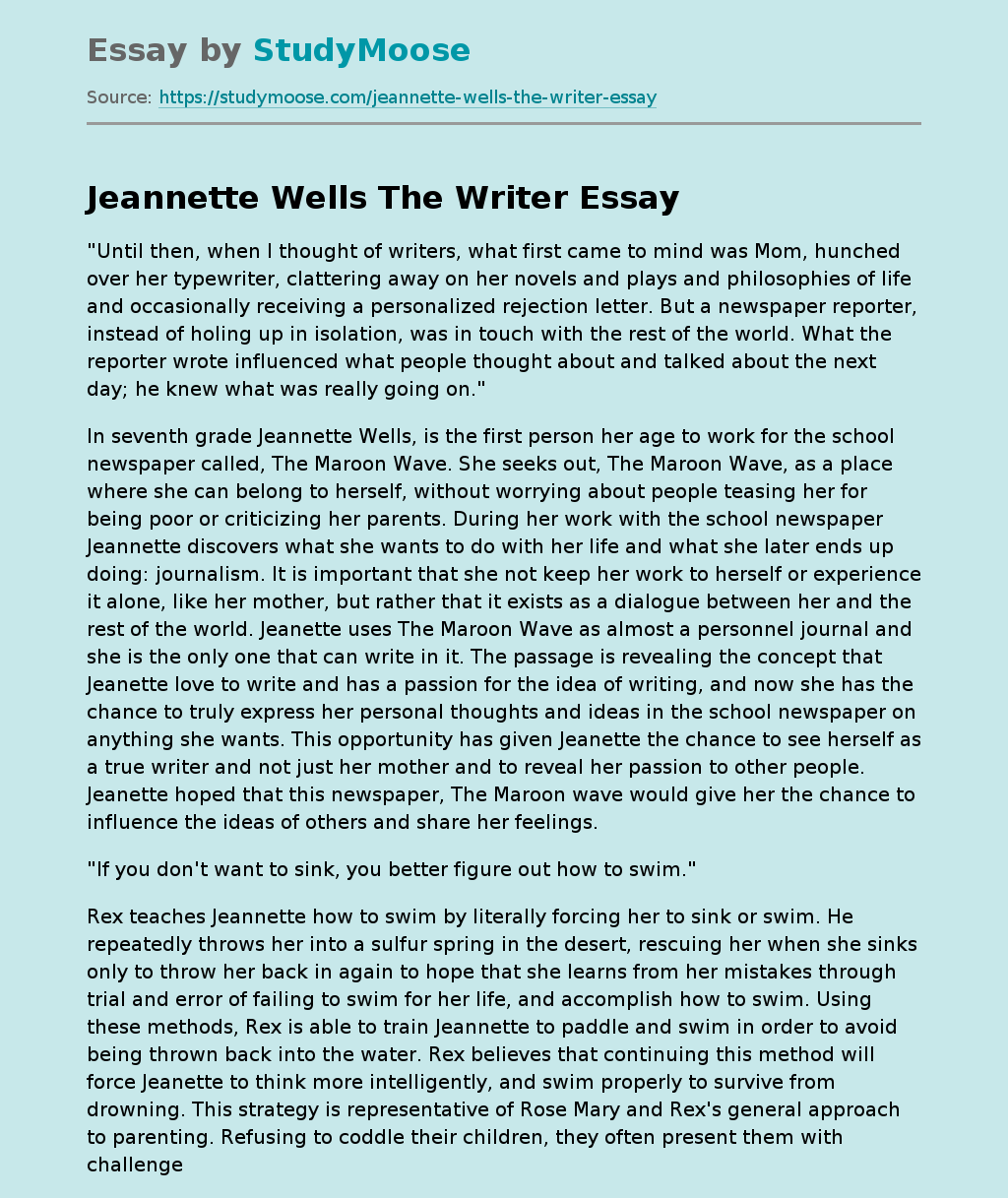