Jayanta Mahapatra`s poem “Dawn at Puri” narrates by describing the Oriyan landscape, especially the holy city of Puri. Mahapatra is deeply rooted in Indian culture and ethos with which he is emotionally attached as a poet. Though the language of expression is English his sensibility is ‘Oriya’. In order to appreciate the prescribed poem it is important to understand his sensitive attitude to the native socio cultural practices.Here in the poem under discussion, Puri is the living protagonist for him .

Don't use plagiarized sources.
Get Your Custom Essay on Jayanta Mahapatra`s poem “Dawn at Puri” Just from $13,9/Page

Puri is not only a setting but also a protagonist because he presents a graphic description of Puri as a central as a place for the four ‘ dhams ‘or ‘sacred cities’ but also for the ‘math’ or the monastery set up by Shankaracharya . Lord Jagganath is the main deity in Puri who is in the form of Lord Vishnu. The way Mahapatra delineates the events and incidents in the poem shows us that he disapproves of what is going on under the cover of tradition and practices.

You will notice how life lies like “a mass of crouched faces without names” and you also can see how people are trapped by faith as expressed in the expression “caught in a net “. The shells on the sand are “ruined” the word, “leprous” is suggestive of decadence and infirmity. The poem evokes loss of identity, anonymity, death, disease and decadence. As I have mentioned above, most of the Hindus wished to be cremated in the land of Lord Vishnu. The speaker’s mother also had such a last wish, the wish to be cremated in Puri. This is fulfilled by the effort of her son in the blazing funeral pyre which is seen as “sullen” and “solitary” .The poem winds up on an uncertain note like the corpse of his dead mother.character .Here Puri is personified.

At Puri, we find a stretch of beach called Swargadwara or ‘Gateway to heaven’ where the dead are cremated. Many pious Hindus and widows feel that it is possible to attain salvation by dying at Puri. Mahapatra states: “Her last wish to be cremated here/ twisting uncertainly like light/ on the shifting sands.” 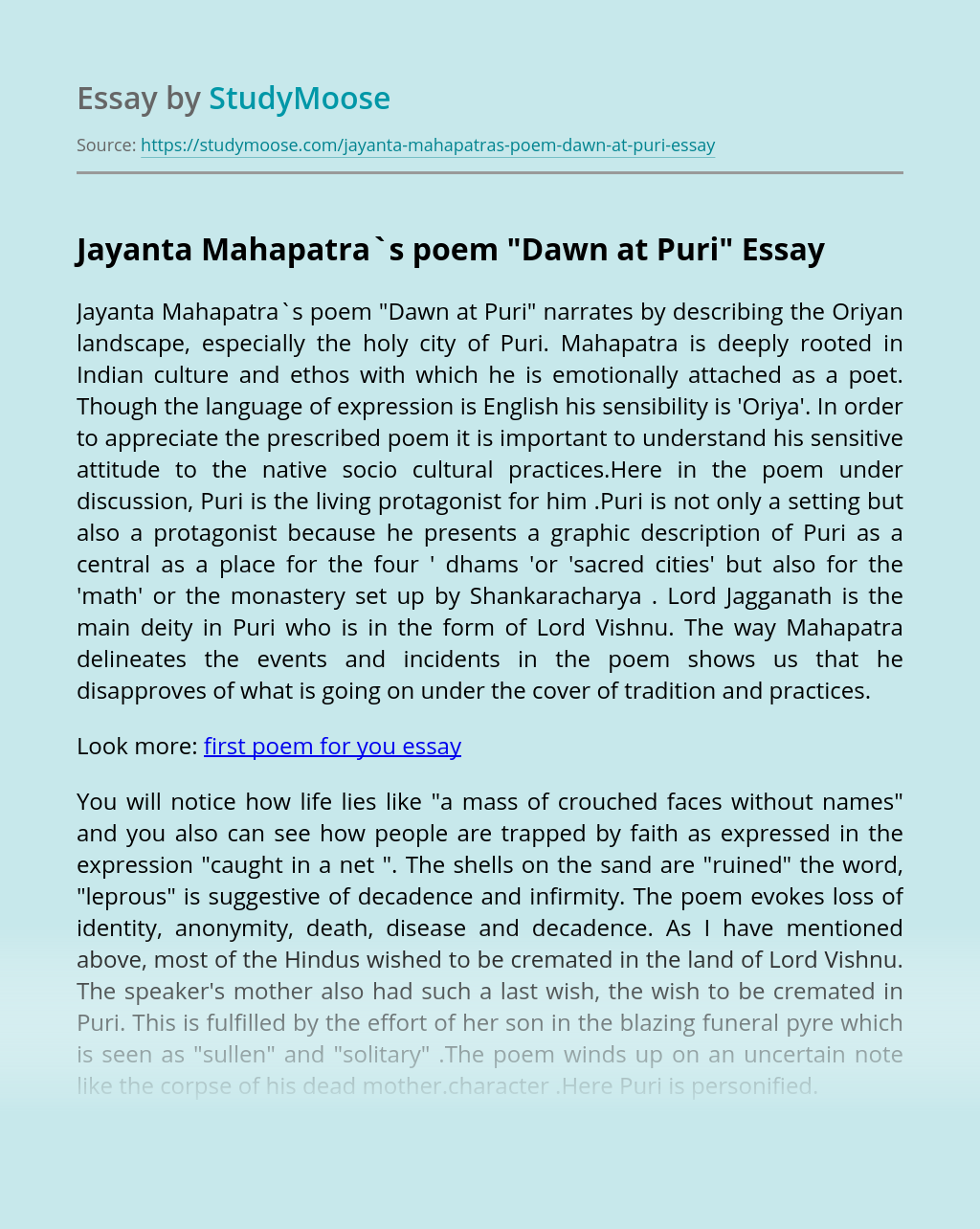 In her essay “Transfiguration” Annie Dillard depicts the imagery of life, death, and destiny to help her reader understand the relationship between the components of a meaningful life. Throughout the essay, Dillard goes into extraordinary detail while describing ordinary things in order to communicate her ideas. By using the images of a candle, the wings...

The beneficial consequences that may result from the legalization of euthanasia as proposed by brock are the following: a. serve as an insurance policy- it comforts patients by allowing them to know that it is there if they need it b. respect the self determination of individuals c. provide a relief from prolonged suffering d....

View sample
“The Death and the Maiden” D. 810 by Franz Schubert

Franz Peter Schubert was born on the 31st of January 1797 in Lichtental, Austria which is near Vienna. He has fifteen brothers and sisters, but only five of them live to see their first birthday. The father, Franz Teodor is the Principal in a local school. The mother, Elizabeth Viets was a cook in a...