Jasper Jones - to what extent is the novel quintessentially Australian

To what extent is the novel quintessentially Australian?

Jasper Jones is an Australian novel by Craig Silvey that explores issues prominent in the author’s 1960s context. Set in the fictional mining town of Corrigan, the novel is a bildungsroman following Charlie Bucktin as he is awakened to the harsh reality of human nature. The novel addresses the main themes of morality, justice and trust, but these universal human issues are coloured by an Australian setting, reflective of Silvey’s contemporary context.

Don't use plagiarized sources. Get your custom essay on
“ Jasper Jones – to what extent is the novel quintessentially Australian ”
Get custom paper
NEW! smart matching with writer

The issues of morality and ethics have always been fundamental to the human struggle, but Silvey explores these themes through uniquely Australian concerns, namely the plight of the outcasts, in the treatment of indigenous Australians and immigrants. The setting of the novel, a small town where people are ignorant and bigoted, is representative of the same issues in the wider Australian context. It is made clear to Jasper that “This town, they think I’m a bloody animal.” due to his half-Aboriginal heritage.

The animal metaphor and emotive language highlights Corrigan’s non-tolerance towards racial differences, while the first person perspective depicts the damaging effect this has upon an outcast individual. This is reinforced by the treatment of other characters such as the An family – “Go back to Hanoi, rats.” The repetition of derogatory animal metaphor and the aggressive tone reveals the prevalent racism. Charlie himself is also bullied for using words that are “too clever”. Silvey’s portrayal of Corrigan is representative of the morality of his own society.

In this racist and anti-intellectual Australian context, outcasts are isolated and beaten down.

The theme of justice is closely linked to that of morality; in a town with corrupted values, can justice ever be impartial? Charlie’s moral conflict over whether or not to report Laura Wishart’s body explores the idea of moral relativity. He is aware that “All that matters is the fact of this girl’s death and the town’s imagination”. The collective town is characterised as an anthropomorphic entity with skewed values; forcing innocent boys to act as if guilty. “I feel I am caught in a rip, being dragged out further and deeper against my will.” The use of the simile conveys the boys’ helplessness to enact justice in the face of the “town’s imagination”.

The body itself is a symbol of the novel’s underlying moral dilemmas. In disposing of Laura’s body, Charlie explicitly says that “I’m committing a crime.” He knows that helping Jasper is the right thing to do, but the use of the word crime, and all it connotes, illustrates how morality can be contrary to traditional justice. The issues of morality and justice explored are unquestionably universal in nature, but the novel’s particular setting and situation renders it a striking commentary on quintessentially Australian concerns.

The value of trust and loyalty is also one that is common to all human experience, and it is this that defines Charlie and Jasper’s relationship; which is forged at the beginning of the novel by the crisis of finding Laura’s body. “Trust me. You got to trust me. Like I trust you.” Jasper’s pleading tone and the repetition of the highly emotive word “trust”, begging Charlie to help him escape the injustice of being wrongfully persecuted, cements trust as a key value in the novel. With this trust, Charlie is able to look beyond Jasper’s race and form a bond with him, despite the town’s negative stereotyping. He states that “I am the ally of Jasper Jones”, and helps him despite his conflicted morals.

The word “ally” suggests that despite not knowing Jasper very well, they share a mutual trust and dependence. The relationship between the boys is reminiscent of the loyalty and comradeship between soldiers, bonded by trial. Against the backdrop of the Vietnam War, these values were highly important to the Australian cultural identity in Silvey’s context.

Through Charlie’s coming of age, Silvey’s Jasper Jones presents a compelling insight into the duality of morality and the human values of loyalty and justice. Though these are undeniably universal in nature, Silvey explores these issues through the lens of his own Australian context, to give a novel which is quintessentially Australian and yet fundamentally human.

Jasper Jones - to what extent is the novel quintessentially Australian. (2021, Nov 15). Retrieved from https://studymoose.com/jasper-jones-to-what-extent-is-the-novel-quintessentially-australian-essay 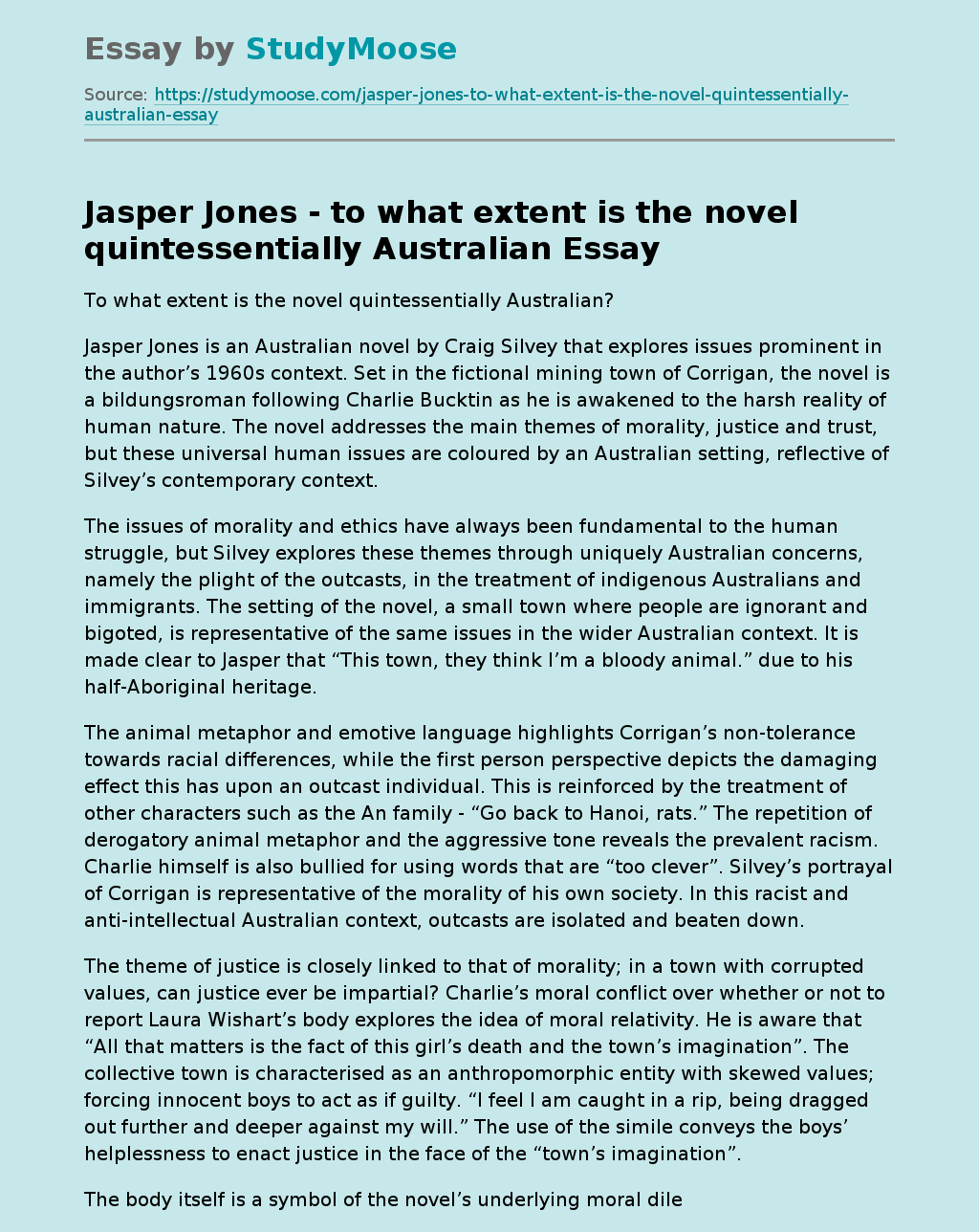