There are points in a person’s life when they must grow, drop their naïve illusions about the world and step into the shoes of an adult and accept the harsh reality of life. Jasper Jones is a ‘coming of age’ novel written by Craig Silvey set in small town Corrogan. With the main theme being right of passage or coming of age. Jasper Jones has been compared to a Southern Gothic Genre story. Using the narrative conventions of characterisation, setting and language elements of Jasper Jones will be shown to have a connection to the Southern Gothic Genre.

Don't use plagiarized sources. Get your custom essay on
“ Jasper Jones as Southern Gothic Genre in Literature ”
Get custom paper
NEW! smart matching with writer

Using the narrative convention of characterisation particularly of the novels protagonist Charlie Bucktin is the perfect example of a coming of age character in which Charlie overcomes the obstacles set before him to emerge as a stronger and well-developed character. A good example is on page 12, Craig Silvey demonstrates how the Southern gothic genre by using this example ‘It is a girl… she is pale.

In the silver light I can see she bears scratches down her arms and her calves and her face is smudged and bruised and bloody… she is still. She is limp… her head is to the side, like a piece of biblical art. She looks disappointed and sad. Surrendered… “Who is it” Jasper Jones takes some time to answer Laura Wishart. Its Laura.’ We can infer the text that despite witnessing what appears to be a brutal murder Charlie still has enough presence of mind to think and plan and not be overwhelmed by the tragic death ha has just witnessed.

Throughout the story of Jasper Jones Charlie sees or reads some of the darker truths if the world beyond the naiveties of a child Charlie experiences: death, torture, racism, hypocrisy, abuse of power, adultery, scapegoat and other traumatic or dark experiences.

Due to being subjected to this Charlie is forced to grow and step out of his comfort zone to take on the challenges and obstacles set before him throughout the course of the story. An example of this is Charlies confrontation of his greatest fear, insects. On pages 386-387 Craig Silvey demonstrates how Charlie comes of age by using this example ‘I look down. There’s a lumpy carpet of decaying peaches at my feet. It’s a windfall but it does very little to dissolve my worry. Because hovering above them are dozens and dozens of insects. Mostly bees, I follow there flight and see a hive under a gutter in the house. There are black ants running trails, slaters and worms burrowing into the soft flesh. March flies, blowflies and houseflies. It’s the stuff of nightmares… I look down my breath is short. There’s a teeming metropolis of insects down there… I feel as though I’m already covered in them.

Like they’re crawling all over my body, scratching and slithering. I clasp my hands together and grind my palms… either way I have no choice I have to get brave.’ We can infer form these text extracts that from Charlies original plan to allow him safety, he must truly conquer is biggest fear. Because of the insects inside Jack Lionels background Charlie defeats his greatest fear and shows that he has developed from a boy full of fear into not a boy devoid of fear but one who has nonetheless conquered his fears. Charlie is faced with many obstacles found almost exclusively within Sothern Gothic Genre this link shows that elements of the Southern Gothic Genre are prevalent on Jasper Jones more specifically.

Jasper Jones is set in a small town in Western Australia Corrogan, in the mid 1960s. Corrogan during the day is a beautiful town, full of kids playing sports. But at night Corrogan is a desolate place comparable to some settings of Southern Gothic Genre. On page 3 Craig Silvey demonstrates how the Southern Gothic Genre effects settings by using this example ‘After climbing my back fence we head downhill into Corrogan houses huddle and cluster together and then stop abruptly as we reach the middle of the town. This late the architecture is desolate and leeched of colour. It feels like we’re traipsing through a post card. We can infer from this text extract that small mining town Corrogan is a desolate place abstract of positive traits and full of decayed dark, derelict, desolate, disturbed and other characteristics only found exclusively within the Southern Gothic Genre.

On page 300 Craig Silvey uses a second example of decayed or settings with this example ‘the yard beyond is scruffy and dilapidated. Along the boarder closest to the river, where the brush meets the property, a thick thatch of blackberries press through the rusted wire fence… crows moan from grey leafless branches. They look like silhouettes. Crow shaped holes. We can infer from this text extract that Jack Lionels front yard during the night is similar to the decayed, dark ominous and derelict settings often found within the Southern Gothic Genre. In addition each of there scenarios feature Charlie overcoming a fear and growing up or ‘coming of age’.

Jasper Jones has been often compared to a Southern Gothic Genre one of the greatest examples of this is the speech used throughout Jasper Jones, particularly racism that is experienced most prominently by Jeffrey Lu and his family Craig Silvey takes advantage of the racism against Vietnamese within the specific time frame within Jasper Jones. Using racist phrases such as ‘fuck of Cong’ and ‘oh me so Solly’ page 78, creates a great example of Southern Gothic Genre using the flawed or deeply disturbed characters as a base. In addition to the racism experienced by Jeffrey there are examples of when his family is subjected to racism in particular Jeffrey’s father An Lu. When An Lu’s garden is affected by citizens of Corrogan the phrase ‘red rat’ is mentioned a racist phrase about Vietnamese. We can infer from this as another example of the flawed or deeply disturbed characters found in Southern Gothic Genre, In addition Jeffrey’s immunity to the racist taunts shows his ‘unflappable’ will or coming of age outlook. 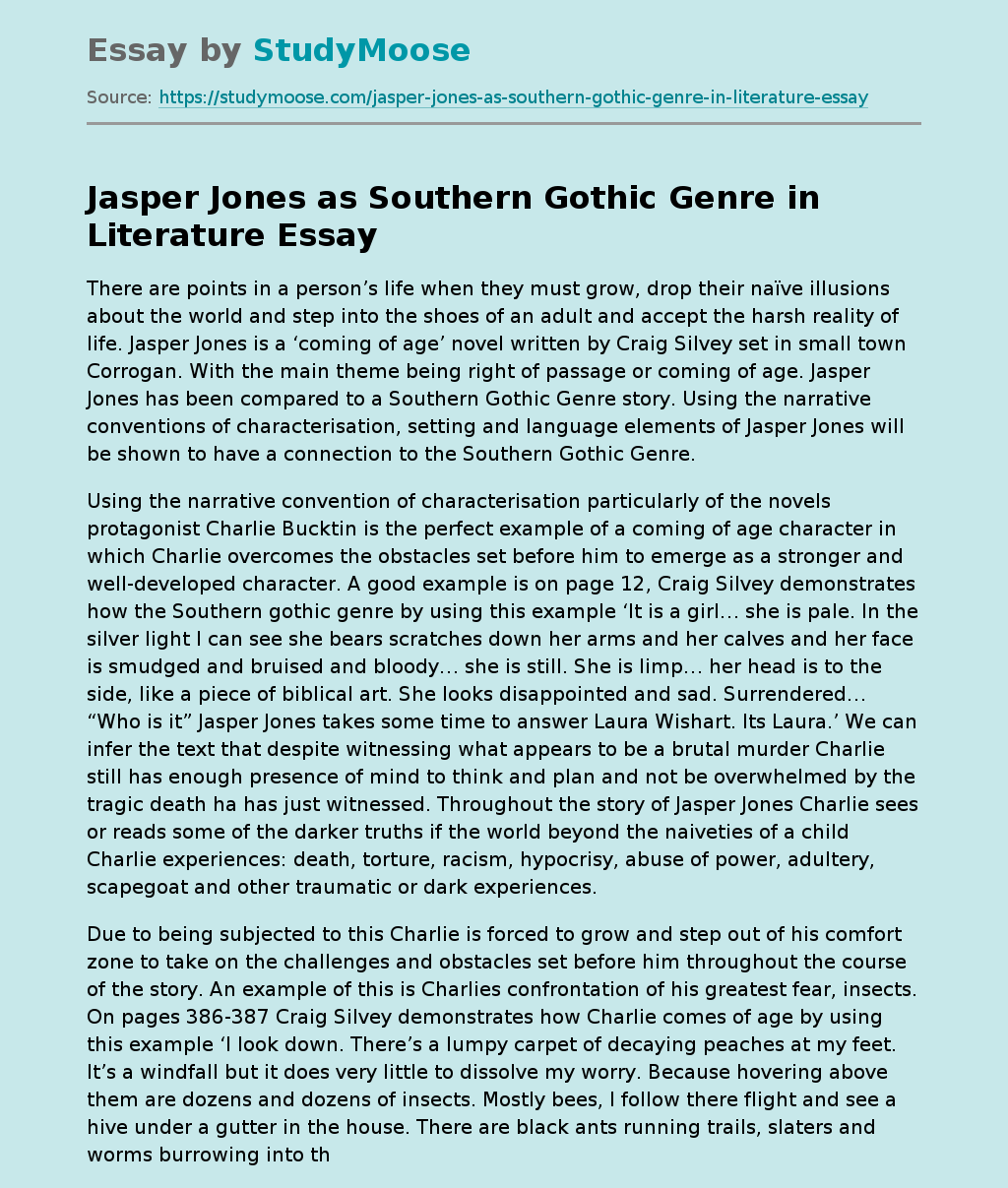