An affluent economy has the dynamics to identify their financial strength and prosperity by the principles they practice and execute. However, when a country becomes overly confident on their abilities to remain consistent as a global power they become vulnerable to complacency. A nation’s economic wealth becomes susceptible when they no longer recognize the potential risks that may lead their country to either a recession or total collapse of their economy. Japan’s economic malaise clearly articulates how the country’s failure to recognize the strategies they set for their nation would lead to one of the biggest economic catastrophes in the world.

Don't use plagiarized sources.
Get Your Custom Essay on Japan’s Economy Today Just from $13,9/Page

Beginning in the early 1980’s up to 1989, Japan’s economy had grew at a record pace. The Nikkei stock market was up over 600 percent and property prices reached levels never seen before. Society was recognizing a wealthy standard of living that boasted the world’s second largest economy.

By early 1989, Japan would experience an improbable market crash that would eventually devastate their hope for continued success. In addition, property prices began to drop significantly in response to the stock market’s immediate downfall. The simultaneous reaction of Japan’s stock market and property prices led to deflationary issues throughout the country. Deflation occurs when there is a continuous fall in prices. The fall in prices become the beginning of a greater issue.

Consumers and businesses begin losing confidence in the economy by trying to minimize the amount of cash they spend and begin saving more to survive. Optimism levels drop dramatically causing a pattern of ambiguity on whether their country has the ability to recover. While Japan was beginning to endure their setbacks, banks began to eliminate lending as property prices began a downward spiral. Debt rose to extreme levels and many businesses started to notice their financials were diminishing causing them to tighten their expenses, decrease their staffs, wages, and salaries. The resulting factors led Japan into one of the deepest recessions of their history. For the last 20 years, Japan’s stagnate economy continues to sequence through a deflationary cycle.

Lessons and the Deflationary Spiral

Although there have been modest improvements, Japan recognizes the challenges that lie ahead in order to restore the economy they once had. Some of the lessons that other nations can learn from Japan’s last 20 years are to incorporate a strategy and vision for their country. In addition, they must be cognizant of how deflation can vividly affect a country’s wealth and how a deflationary cycle can disturb its chances to prosper. While it is important to understand some of the lessons that other nations can learn from Japan, it is vitally essential for countries to know how to avoid a deflationary spiral. One of the ways a country can avoid a deflationary spiral is to embrace a continuous strive for economic development through education and job growth. As of June 2012, Japan’s unemployment rate stood at 4.6% compared to 2.0% in 1989. Job creation and education promote opportunities that have the potential to turnaround a deflationary spiral.

Lastly, by recognizing how Japan continues to have difficulties with deflation their struggles offer some opportunities that they can utilize to enhance their economy’s wealth. According to Hill (2013), Japan could reverse this trend by increasing immigration or boosting the birthrate, but neither of these seem likely at the moment (Hill, 2013, p.96). Although Hill has reservations on whether immigration or boosting the birthdate may not be likely due to a cynical population, Japan must evaluate all of their options in order to persevere. In addition to the potential of increasing immigration and boosting the birthrate, Japan should also consider raising their sales tax.

If Japan raises their sales tax of 5% in increments of 1.0% each year over the next five years, they will be able to offset some of their discretionary costs such as welfare and other governmental benefits to help ease some of the deflation they are enduring. While there may be many options to get Japan’s economy moving again one of the most advantageous methods is to evaluate how they fell into a deflationary spiral. Japan must acknowledge and learn from their inaccuracies by developing productive procedures that incorporate inflexible checks and balances in order to recognize their faults and establish an economical plan that will restore hope and optimism with in the Japanese population.

Japan’s economy has gone through significant challenges over the last two decades. By recognizing how Japan continues to have a stagnated economy, the lessons learned to prevent other countries to fall victim, how to avoid the deflationary spiral, and how to reinvigorate Japan’s economy, leaders can gather great insight on how to manage their own economies. In the international world of business transactions and economic trends, countries must exercise good intentions for their nation and maximize sound judgment in a way that promotes confidence and assurance that they are making the right decisions. Japan’s economic malaise over the last 20 years proves the importance and severity of what can happen if a country lacks the vision and strategy to succeed. 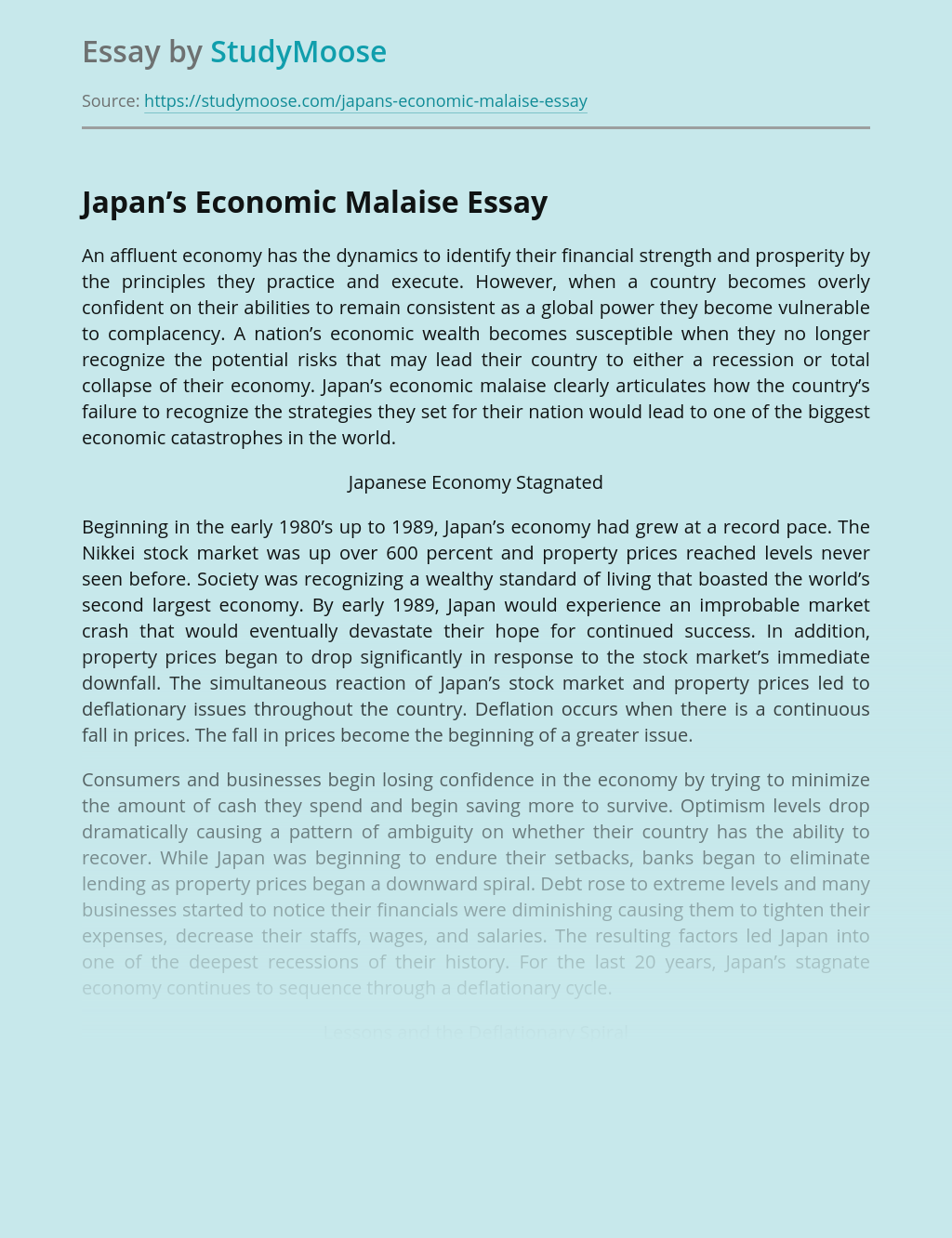 Rate this post There are a few EDHEC Global MBA participants who decided to study in this program to search for better understanding of business disciplines in order to improve their quality as managers with the main goal of returning to their countries and continue their family business. Family business can be very large, a...

Socio-Economic Empowerment Of Women In India

Rate this post Summary The objective of this paper is to put forward a broad idea about social capital and its implication in experience for socio-economic empowerment of women through self help groups (SHGs) like Kudumbashree program in Kerala. The word Kudumbashree in Malayalam, denotes that prosperity of family. The happiness and economic sufficiency among...

Economic Growth And Standard Of Living

Rate this post To understand any topic it is always important to take note of the key words. In this case I am going to first pin point the key words. Economy in a lay man’s language is the management of finances or care in the use of resources. Others may say it is a...

Is evil really the nature of mankind

Rate this post Is evil really the nature of mankind? Introduction             Man is assumed to have morals. Morality can be defined as the ability to come up with ruled and adhere to them to the letter coupled with the ability to discern right from wrong. This raises the question whether man does wrong on...