An earthquake occurred on March 11, 2011. It was measured as a 9.0 earthquake according to the Richter scale. It occurred 500 kilometres off Japan’s coast. The epicentre was near Sendai in Japan. It was 32 kilometres below water level. (EARTH Magazine, 2011)(Japan Tsunami 2011, 2019)Japan sits on top of four different tectonic plates which cause the island to deal with 1,500 earthquakes annually. Japan is located in the Ring of Fire, which is a place where many earthquakes and tsunamis transpire. The four tectonic plates that rub against each other are called the North American, Pacific, Eurasian, and Philippine plates.

Don't use plagiarized sources. Get your custom essay on
“ Japan Tsunami ”
Get custom paper
NEW! smart matching with writer

The northern part of Japan is on the western point of the North American plate and the southern part of Japan is mainly on the Eurasian plate. The North American plate was responsible for the 2011 earthquake and tsunami. (Science and Earth, 2019)Tsunamis occur when an earthquake transpires in a subduction zone, a region where an oceanic tectonic plate is forced down into the mantle by plate forces.

The friction between these plates is massive. Energy is created from the dominant plate and when it surpasses frictional forces it snaps back. The abrupt movement is what starts the tsunami. (King, 2019)

Following the disaster analysts guessed that the rehabilitation price would surpass ¥10 trillion ($122 billion) but, later the government predicted the price of the physical damage would go beyond ¥25 trillion ($300 billion). Roughly about 23,600 hectares of farmland, which was mainly rice paddies, had been harmed by the disaster. Salt remained in the land because of the tsunami. The damage could affect rice crops for decades.

Roughly about 4.37 million chickens perished after the earthquake because of the lack of supply of food from overseas suppliers. About 26,100 fishing boats in Miyagi, Iwate, and Fukushima districts were unusable. Due to this Miyagis’ fishing industry was nearly destroyed. Only 1,000 fishing boats in the district were usable and 440 fishermen were perished or went missing. (En.wikipedia.org, 2019)

The Prime Minister proclaimed that the Japanese government had deployed the Japan Self Defence Forces in earthquake disaster zones. The Prime Minister requested that the Japanese public act calmly and check the media for news of the disaster. He said that many nuclear power plants were immediately closed to stop damage and releases of radiation. The authorities pledged to fix the damage, an attempt predicted to cost ¥1 trillion. Japan specifically asked disaster relief squads from Australia, New Zealand, South Korea, and the United States. By 19 March 2011, 128 countries and 33 international companies had provided Japan help. The EU was always ready to help Japan through the disaster whenever they needed it. China and France were evacuating citizens from the worst-hit areas.

Twenty, thousand US military staff, consisting of 19 naval vessels and 120 aircraft were sent to offer help and transport provisions to disaster areas. (En.wikipedia.org, 2019)Researchers from the University of Brighton (UK) created a “vibrating barrier” which is used to lessen the trembles of close buildings caused by an earthquake’s waves. The gadget would be put deep in the ground and disconnected from nearby structures. The device should absorb a large amount of the energy coming from the ground with a result of depletion in seismic response. This instrument will significantly reduce the amount of destruction and the number of deaths. The Conversation. (2019) 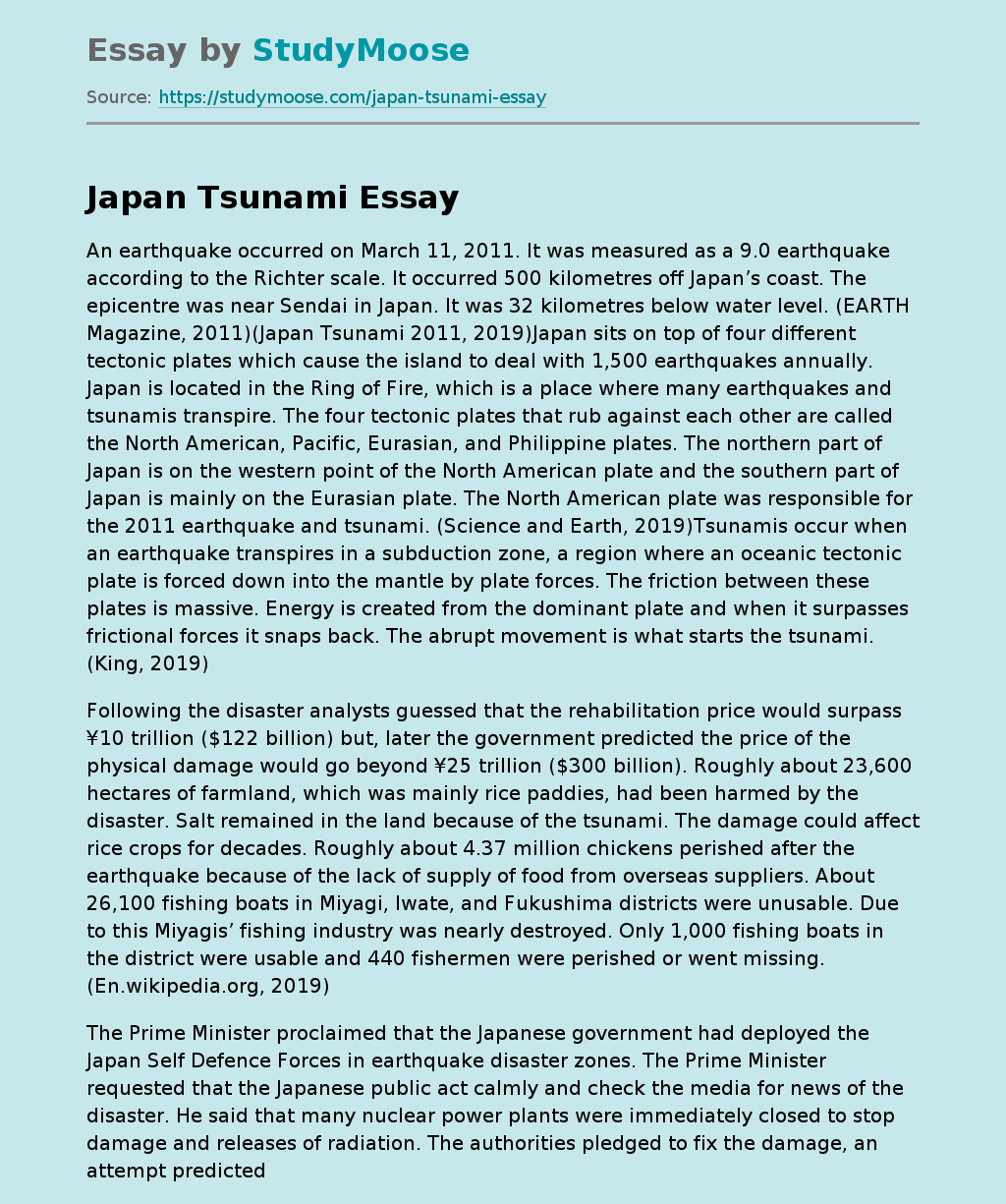