In 1853, Western imperialism was at its height. It was spreading to several countries. British colonized India, the dutch colonized Indonesia, the United States colonized the philippines, and the french colonized vietnam. In 1929, the crash of the stock market brought a worldwide depression, known as the Great Depression. The depression caused instability in many countries. International commerce declined and tax revenues, profits, and personal income decreased. The great depression especially impacted countries that were in need of raw materials. Between the time of 1853 to 1941, Japan’s culture and political structure changed in the hopes of becoming more westernized because they wanted to be seen as equals to the Western countries.

Don't use plagiarized sources. Get your custom essay on
“ Japan CCOT – History ”
Get custom paper
NEW! smart matching with writer

Japan also became more militaristic in hopes of not being a victim of imperialism. Although Japan experienced some changes, Japan continued the ideology of kokutai as a method for imperial advancement.

Japan’s cultural and political structure changed from being a weak isolated nation to a modern imperialist country. Before Japan westernized, it was under the rule of the Tokugawa shogunate.

This was an agricultural economy with a population of 13 billion. Japan did not associate with any other country because they believed foreign influence was a destabilizing factor. This resulted in overcrowded farms and scarce minerals. In 1853, Commodore Perry came to japan with his big black ships. The technological advancements of the ships shocked the japanese. They ended isolationism and opened trade ports in order to avoid destruction. Failure of success, in 1868 the Tokugawa shogun was overthrown and emperor Meiji had complete power.

During this time, Japan was very decentralized. There were several semi-independent feudal lords. The emperor saw how Japan was at a great disadvantage from being in isolation for so many years. He knew that in order to strengthen Japan, change was needed. This resulted in the Meiji Restoration. By 1912 Japan had a highly centralized government. There was a constitution establishing under an elected parliament. Japan had a well developed transport and communication system. Japan also increased their knowledge. There were no more feudal class restrictions in Japan. Japan was no longer weak, instead they were powerful.

Japan changed from being a militarily weak country to having a powerful army and navy. During the Tokugawa Shogunate, samurai were the soldiers of Japan. However, due to the long period of isolationism, samurais were losing their military function. Sumaris were used more for symbolism rather than support. In 1853, Commodore Perry came to Japan and threatened to destroy them if Japan did not open ports for trade. Japan’s army was to weak at that time to ignore this threat. Due to this, the Meiji reformers eliminated the outdated samurais and built a fresh new imperial army. The Meiji reforms did not want to be the target of the West, and to do that they needed to have a strong and superior army. The japanese believed a strong army was the key to imperialist success. A strong army can allow expansion. During the Great Depression, it was difficult for countries to trade. Japan was reliant on imports of resources from other countries such as the United States. The lack of imports resulted in Japanese expansion to China. The Japanese thought if they colonized China, they could be a non reliant country. They could support themselves with supplies. Japan were able to use military strategies in order to expand. In 1931, the Japanese blamed the Chinese for putting an unknown bomb in a railway near Shenyang. They used this as an excuse to completely occupy Manchuria. Manchuria had all the necessities that were needed by the Japanese such as coal, iron, and other minerals. This resulted in the colonization of Manchuria. Japan invaded Manchuria so that they no longer had to depend on foreign trade for resources. In 1941, Japan bombed Pearl Harbor. This act of aggression showed that Japan believed they were strong enough to fight the militant strong United States. In 1853 the United States had sent a threat to weak Japan, however throughout the years Japan trained its army and back fired at the United States. THis showed how Japan had changed it’s military drastically since 1853. Despite all these changes, Japan continued the belief of Kokutai. Kokutai was strong Japanese identification. Kokutai gave the Japanese one common identity. This related every Japanese to another. Despite the weak military, economy, and culture during the Tokugawa Shogunate Period, it was still a period of advocation for kokutai. According to the Japanese, they believed that the emperor was a descendant of god and so were the Japanese people. This belief made the Japanese think that their race was superior. This nationalism was a uniting factor. The tokugawa Shogunate period used kokutai as means of maintaining the Japanese culture.

Restoration, the emperor wanted to maintain this uniting factor so he established a Shinto-oriented state. Shinto teachers would advocate kokutai ideology to children. This resulted in a rise of nationalism. IN 1853, when Japan opened their ports, they ended isolationism. The end of isolationism imported several Western ideas, however the Japanese did not use this as a weakness. Instead they integrated their Japanese beliefs of kokutai with western ideas. They adopted the western culture and used it with national polity. In the 1930’s, Japan saw that imperialism was necessary in order to get the resources they needed. The idea of racial superiority made the Japanese they are better than any other country and they can invade any country they want. In 1937, the Japanese captured Nanking and harmed thousands of civilians because the Japanese believed they were better than the Chinese. This was known as the Nanking Massacre. There was mass murder and mass rape done by the Japanese troops. Since the Japanese were “superior,” they believed it was okay to treat the Chinese this way. They were inferior because they were not descendants of God. Between the time of 1853 to 1941, Japan’s culture and political structure became more Westernized so that they can be an equal power to the Western imperialistic nations. Japan also became a strong militaristic country, so that they could defend themselves from any hindering imperialistic power. In spite of all these changes, kokutai advocated extreme nationalism and racial superiority throughout Japan. The end of isolationism made Japan rise as an imperialist power. The Great Depression was the main driving factor for imperialistic views in Japan. Japan was able to accomplish their goal of westernizing while still maintaining Japanese distinct ideologies such as kokutai. Through Japan’s progression from 1853 to 1941, it can be seen how significantly the Western nations impacted Pacific nations. 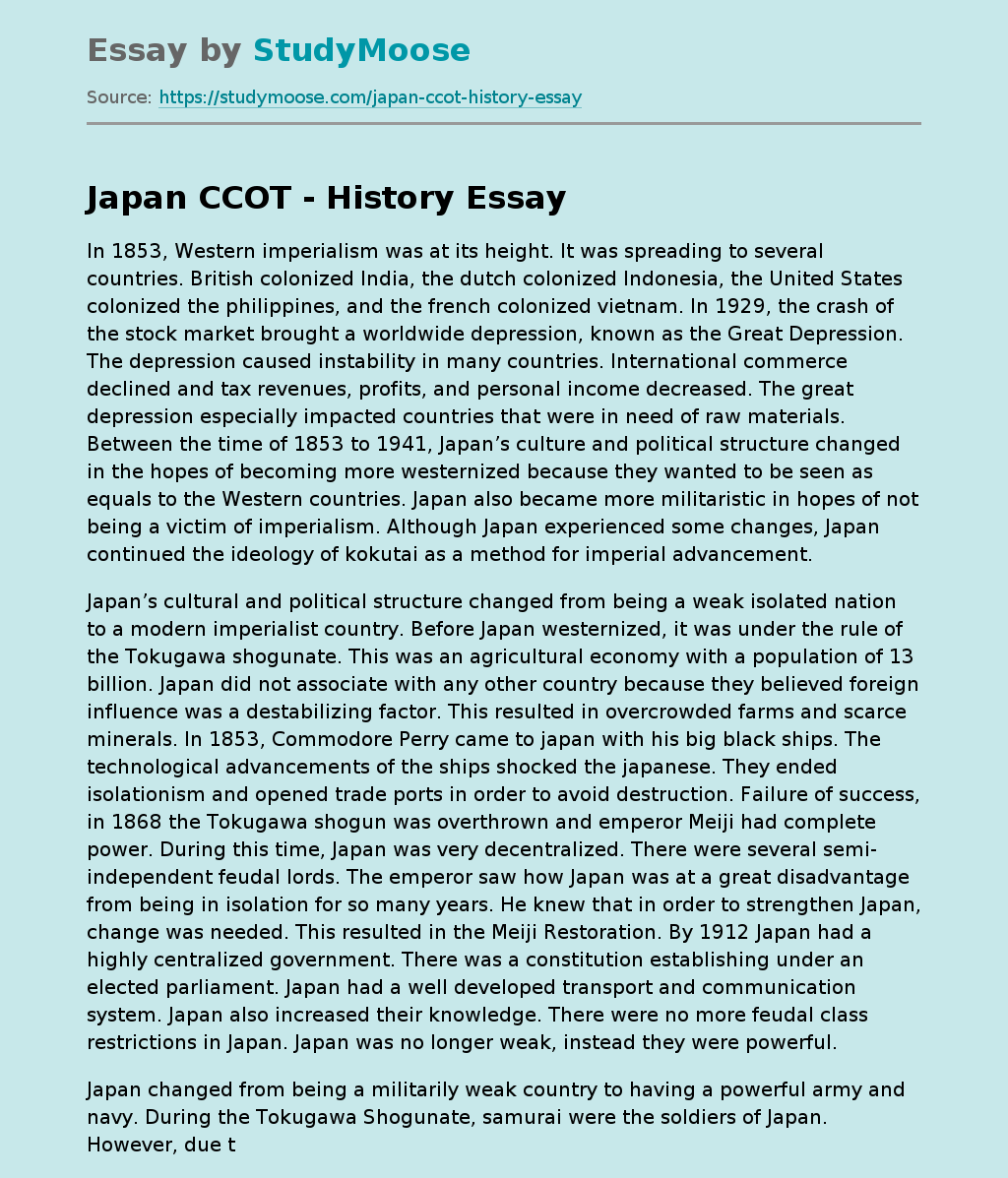