Janet Echelman, an artist whose career was influenced by imagination, begins her monologue in February of 2011 in Long Beach, California. She began by stating to take imagination seriously. She gives an introduction to her art life and how it began years ago. She mentions her downfalls and how she applied to seven art schools post college and was denied by every single last one of them. She also states how she was an unlikely person to pursue what she had in her life.

Don't use plagiarized sources. Get your custom essay on
“ Janet Echelman’s Professional Development as an Artist ”
Get custom paper
NEW! smart matching with writer

She explained how she never studied architecture, engineering, nor sculpture. She began her art journey on her own, painting for ten years before she was offered a chance to further her journey in India. She had committed to giving exhibitions once there. She shipped her material and planned to meet them there. Once she arrived, her material didn’t before the deadline of her first exhibition. She had to figure out an alternative plan. She was in a fishing city that was famous for sculpture.

She walked on the beach and noticed the mounds of fishing net she had seen the fisherman working with previous to that day. At that point her imagination began to work in a different way. She discovered a new art form that would work perfectly with what she wanted to portray. A way to sculpt geometric form with lightweight and inexpensive material. She made her first project with the fisherman and titled it “Wide Hips”. The nets were lifted on poles in the sky as winds tided through the material shifting the patterns.

She next journeyed to make the mesh objects bigger. Janet later returned to India to work with the fisherman producing a net with a million and a half hand knit knots. The net was installed in Madrid, where an urbanist noticed her work.

He offered her a chance to display her work in a permanent position in Porto, Portugal. She searched for a fiber that would withstand weathering conditions for two years. She needed something that would capture the components of her previous works but still be durable enough to be permanent. She partnered with a fishnet factory and developed and produced the lace material she needed after three years. After that, her life changed. She got the opportunity to create these net sculptures in various cities around the world. She also practiced using different materials that changed form as well.

Echelman’s preparation of her creativity was not initially thought out. She came up with a spur of the moment concept and made the accommodations later on. She developed an understanding of the concepts she wanted to achieve and the look she wanted. She began looking into different materials and partnered with engineers and factories to achieve what she desired. Janet’s incubation period happened after she experienced the temporary display in Madrid. Once offered a permanent position in Porto, she obsessed with making her project happen. Once she realized she could accomplish whatever she put her mind to she let go and her career expanded. She achieved her illumination period once she partnered with the fishnet factory. Echelman’s verification moment happened after she displayed her project in Porto, Portugal. She began expanding her ideas in different ways and places.

Taking imagination seriously is the prototype of imagination and curiosity. Lets take Janet’s work for example. She had to use her imagination to overcome a challenge she had no control over. She first discovered the item that she would use and then used her imagination to fathom an art form unheard of. She used creativity to turn a net into a 3D geometrical shape that can change form at any given moment. She did not stop there. She had to create a way for her art to be permanent and unaltered by weather conditions. The initial imagination she had of the nets sparked her creativity to expand her projects and eventually lead her into trying different materials.

Janet Echelman’s story is definitely influential. If an individual is in a space where they’re lost and unsure of their next step, her story inspires a person to think on the next level. This way of thinking can inspire the society to think in alternative ways, possibly bringing innovation into society. Sparking a new way of thinking can bring people to finishing things they have never thought they could have. Personally, I would take the time to use my imagination in situations, not only when I’m indecisive of what to do, but also on a regular basis. One would never know what they could come up with via this way of thinking. 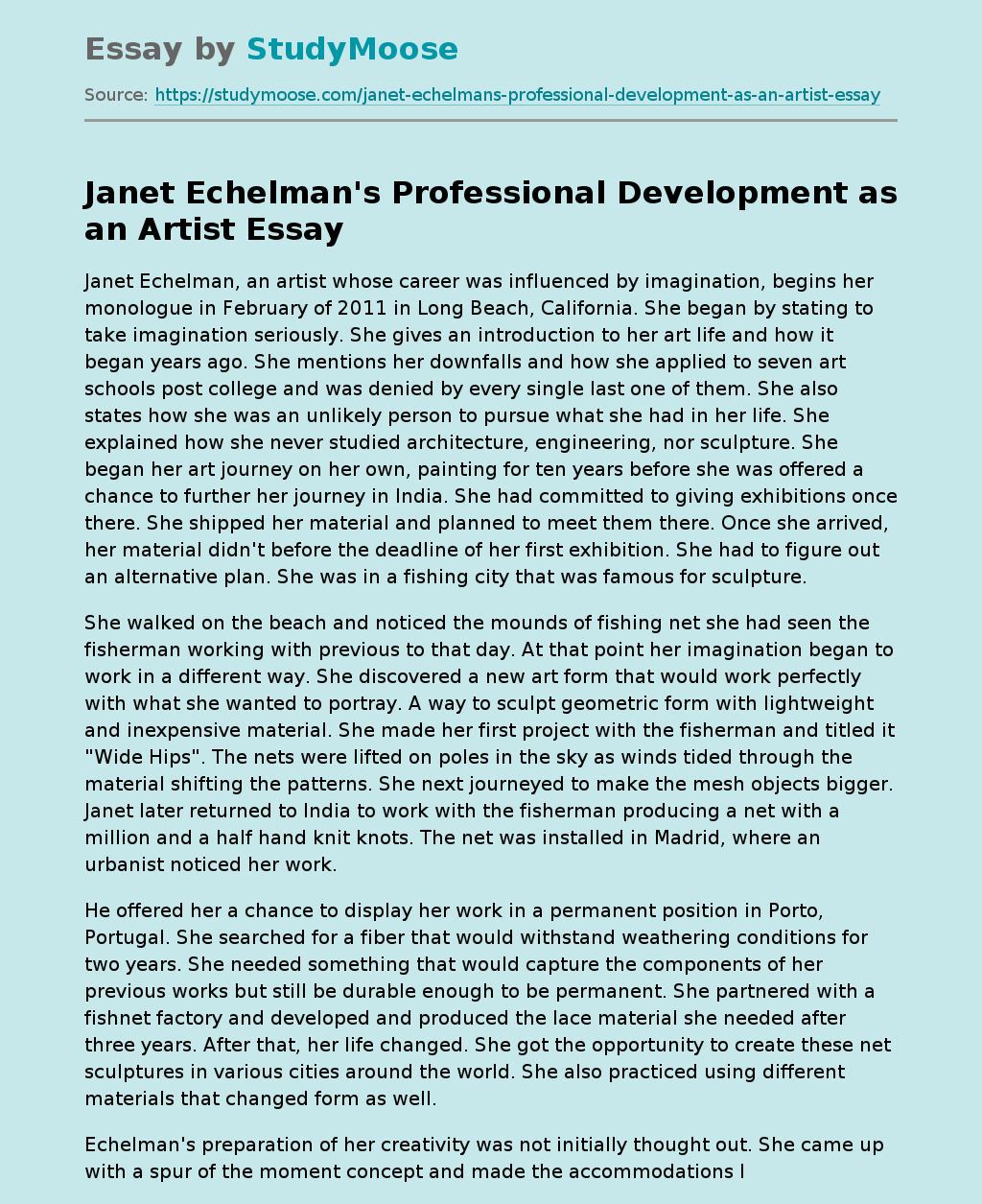