Jane Austen's Use of Irony in Pride and Prejudice

Irony is the art of expressing two meanings simultaneously; the obvious surface meaning the majority will regard as the only meaning and on a deeper profounder meaning which lies behind the obvious.

The tension created by this ambivalence can be and has been put to a variety of uses. Ironies abound in Shakespeare, so do they in Dryden and Poe.Shakespeare employs them to underscore the tragic plight of a man, while Dryden and Pope use them to mock at human follies and foibles.

among the forty eight writings, Fanny urney’s ‘Cecilia’,’Comilla’ and other novels are based on quiet but incisive irony. Thomas Love Peacocks “Headlong Hall”, “Nightmare Abbey’,”Maid Marian” and so on are the vehicles of attacks on the cranks and the fads of his day.but very few writers have exploited all possible resources of irony as Jane Austen.It may not be an exaggeration to say that Jane Austen is nothing if not ironical.Irony is her very forte;it is in fact the very soul of her art.

Pride and Prejudice, for instance, is steeped in irony.To put it in other words, it is an artistic blend of ironic and dramatic design.almost everything in this novel, be it related to the context or to the style, points to an ironic contrast between ‘appearance’ and ‘reality’.it is the complex handling of “First Impressions” that lends to Austen’s irony.

Perhaps the opening sentence of the book offers the aptest illustration of irony.

It states that “‘a single man in possesion of a good fortune, must be in want of a wife” and claims that “it is truth universally acknowledged.” But as the story unfolds itself we learn that “universal truth lies” in the opposite direction.Mrs Bennet’s concern for getting her daughters gainfully husbanded constitutes the basic theme of Pride and Prejudice.

In an essay Reuben Brower writes:

” In analysing the ironies and assumptions, we shall see how intensely the dialogue is, dramatic in the sense of defining the characters through the way they speak and are spoken about.”

The confusion that even very intelligent people are capable of making between the apparent and the inherent is initially drawn towards Wickham mainly because of his external graces and Darcy’s first reaction to Elizabeth is that of repulsion simply because to quote Darcy, she is “not handsome enough to tempt” him.

The situations——at least a good number of them —–in Pride and Prejudice. are also very ironical. Darcy’s

first proposal to Elizabeth is made exactly at the moment when Elizabeth hates him most.When Darcy proposes to her she simply rejects him and blames him for separating Jane from Bingley;She further accuses him of his abominable treatment of Wickham.She tells harshly—-‘..my opinion of you was decided.Your character is unfolded in the recital which I received from Mr.Wickham…can you defend yourself?’

Later on Darcy changes,and happily, the changes are mostly for the better. The changed Darcy does not feel shy of confessing : ” I have been a selfish being all my life, in practice, though not in principle.”Once Darcy has been humbled,Austen turns her irony on Elizabeth.She shows that Elizabeth in resentment of Darcy’s conscious superiority, has exaggerated his faults and failed to see that there is much goodness in him.then again. Lydia’s elopement with Wickham, which Elizabeth fears shall spoil her prospects of marriage with Dercy, strangely enough brightens the same.similarly, Lady Catherine’s attempts to prevent this marriage succeeds in only hastening it.

All these clearly spells out Austen’s attitude towards life.She knows that human nature and human situations are often too incongruous and contradictory.But she does not deride this aberrations with the cruelty of a Dryden or a Pope,her irony is always gentle and sympathetic.she uses it mainly in order to raise a hearty laughter.This, however is not to suggest that her comic is not rooted in any sense of responsibility.

She has very certainly a distinct moral purpose of her own. She will not only expose the antithesis between sense and nonsense,she will at the same time state her preferences in unmistakable terms.needless to say she casts her vote in favour of sense.there is pride in life as also there is prjudice; but life, in order to be ideally lived needs to be a combination of both..Darcy has to stoop to conquer his pride before he becomes worthy to be happy and Elizabeth has to get over her prejudice in order to enter into a life of bliss.

It is this moral vision that spells itself out in course of the novel “Pride and Prejudice”, though Austen’s irony plays the all pervasive; yet it never allows this vision to attain the abominable portions of any kind of didactism.indeed, it may be said that one of the greatest charms of this novel is derived from the gentle “tongue in the cheek” way of describing people and situations.For this Jane Austen’s tales offer a rippling sense of pleasure to her readers.

Jane Austen’s Use of Irony in Pride and Prejudice. (2016, Jul 05). Retrieved from https://studymoose.com/jane-austens-use-of-irony-in-pride-and-prejudice-essay 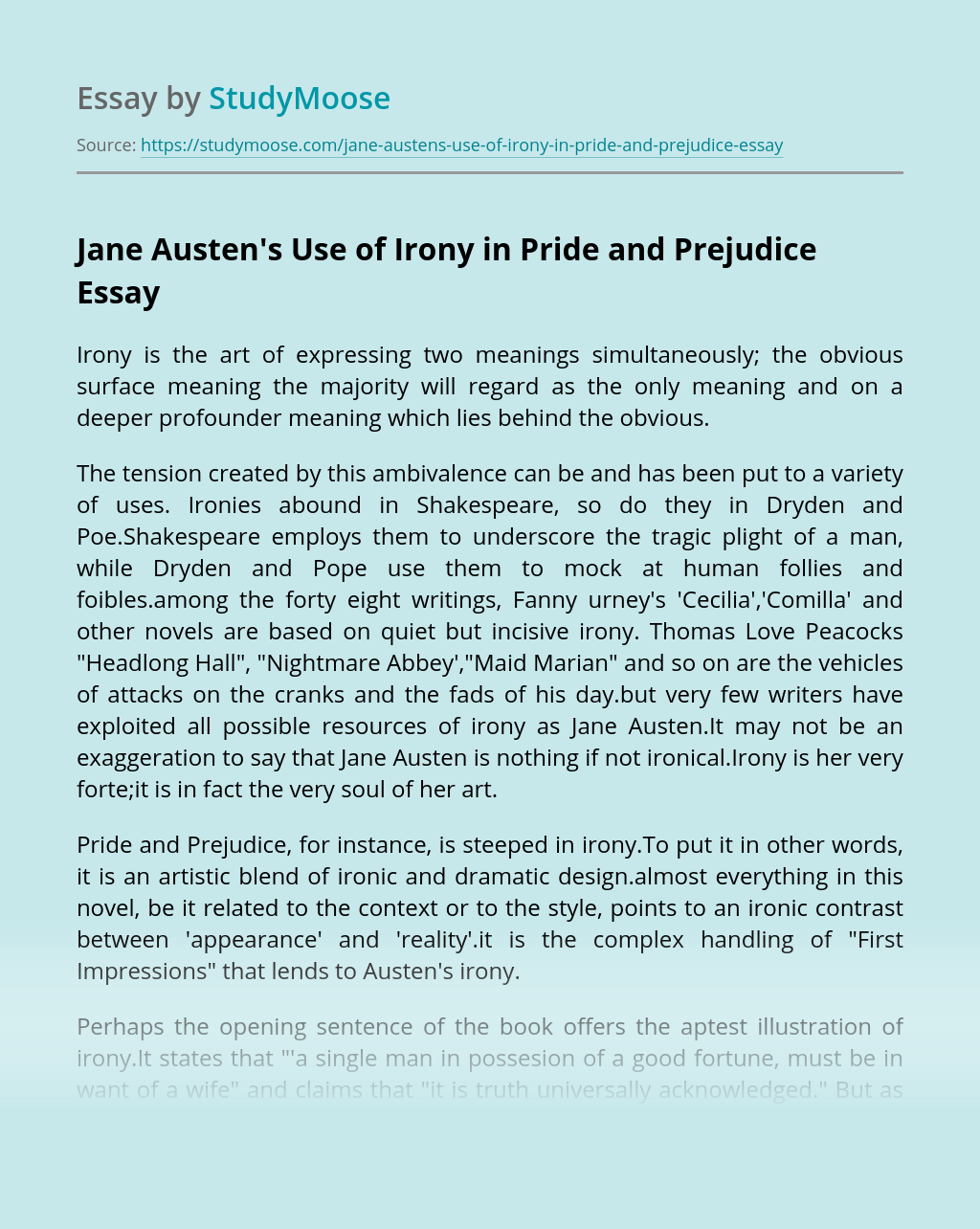 In Pride and Prejudice, Darcy and Elizabeth first encounter at the ball in Meryton. Not such of a good impression they had on each other. Darcy’s first opinion is well understood as he says, “She is tolerable; but not handsome enough to tempt me.”(Page 8) As Elizabeth overhears his critical comment, she dislikes Darcy in...

Get Essay
Role Of Minor Characters In Pride And Prejudice

The Function of Minor Characters in Austen’s Pride and Bias Perhaps the most striking part of Jane Austen’s novel Pride and Prejudice is her mastery of characters and the results that each has on the plot, styles, and the other characters’ actions. Though her small characters are much less noticeable than the major ones, she...

Jane Austen’s novel Pride and Prejudice (1813) is believed to originate from the manuscript called First Impressions that have been written between 1796 and 1797. The initial title indicates that characters’ behavior and evaluations are influenced by their first impressions. The second title stresses the importance of such psychological traits and mechanisms as pride and...

In the beginning of reading this classic love story, I could have fallen asleep while reading and I actually did; but while the story went on it grew more interesting I couldn’t put my book down. The pride and prejudice referred to in the title of this Jane Austin novel prepare the reader for the...

Pride and Prejudice essay - a comparison of Elizabeth and Lydia

Elizabeth Bennet is the 2nd eldest of Mr. and Mrs. Bennet’s 5 daughters. Lydia is the youngest. The only thing these 2 brother or sisters seem to share is their family. The girls contrast starkly. Lydia Bennet has a rather childish and fun caring disposition. She encounters as a little doing not have in intelligence...

A Look At Pride And Prejudice English Literature

The Social Class Of Pride And Prejudice English Literature Essay

Pride and Prejudice has four chief inflexion points: first feeling, misinterpretation, attractive force, and matrimony. The first feeling is where all the members of the aristocracy and the common people have a opportunity to measure each other and their worth. The lone two people who have any opposition from this fickle but expected judgment competition...