Has writing ever changed your life? Have you wondered about the author of the amazing work? James Baldwin was the author of books, plays, and essays that broke literary ground. His work explored social and racial issues regarding discrimination. James Arthur Baldwin was born in Harlem, New York in August 2, 1924 to Emma Berdis Jones and an unknown father. His stepfather was David Baldwin, a Baptist preacher and a factory worker. Baldwin grew up with an abusive father and a poor family with eight siblings.

Don't use plagiarized sources. Get your custom essay on
“ James Baldwin ”
Get custom paper
NEW! smart matching with writer

He wrote and edited the school magazine at his middle school, Frederic Douglass Junior High, at the age of 11. At the ages of 14 through 16, Baldwin was a Pentecostal preacher at Pentecostal Church, delivered by the difficulties of life, as well as his abusive stepfather, who was also a preacher. At the age of 15, a running buddy, Emile Capouya, recommended the young Baldwin to meet Beauford Delaney, an American modernist painter.

Delaney became Baldwin’s mentor, living proof that African-American artists exist and that he could become one himself.

You might be wondering what Baldwin achieved in young adulthood as he matured into the revolutionary writer he became. After attending high school, Baldwin started a string of ill paid jobs, self-study, but earned a literary apprenticeship in New York City. Around the age of 20, Baldwin moved to Greenwich Village, New York a popular home of African American artists and writers. While in New York, he befriended Richard Wright, a fellow African-American writer. At the age of 21, Baldwin landed a fellowship through Wright.

He started to publish his first essays and short stories (ex: The Nation, Partisan Review, and Commentary). Three years later, at the age of 24, Baldwin moved to Paris on another fellowship. His personal life was lonely. He once loved Lucien Happersberg, a Swiss artist that he lived with while he stayed in Switzerland. He was single and had no children. His personal hobbies included writing and reading which lead to his writing career. He enjoyed writing poems, essays, short stories, and plays that were against discrimination.

Baldwin was one of the leading voices in the civil rights movement. His work broke literary ground by influencing others. Maya Angelou called Baldwin her “friend and brother” and was greatly influenced by his work. He was especially well known for his essays on the black experience in America. He provided an unflinching look at the black experience in America through his work. Nobody Knows My Name, one of Baldwin’s touching books, hit the best-sellers list, selling more than a million copies.

Early on December 1, 1987, Baldwin died of esophageal cancer in Saint-Paul-de-Venice, France. He was buried at the Ferncliff Cemetery in Hartsdale, near New York City. Baldwin was cheerful and active days before his death, hosting a Thanksgiving dinner. He had continued to write until his death at the age of 63. He had finished Cross of Redemption: Uncollected Writings, and had published The Price of the Ticket in 1985, just two years from his death. James Baldwin was an influential person. I learned that anyone can change things within and without your reach with determination. I was impressed that he was eager to change people’s perspectives of the world around them. The lesson that I learned from him was that one should do the right thing in bad situations. James Baldwin was a truly amazing person. 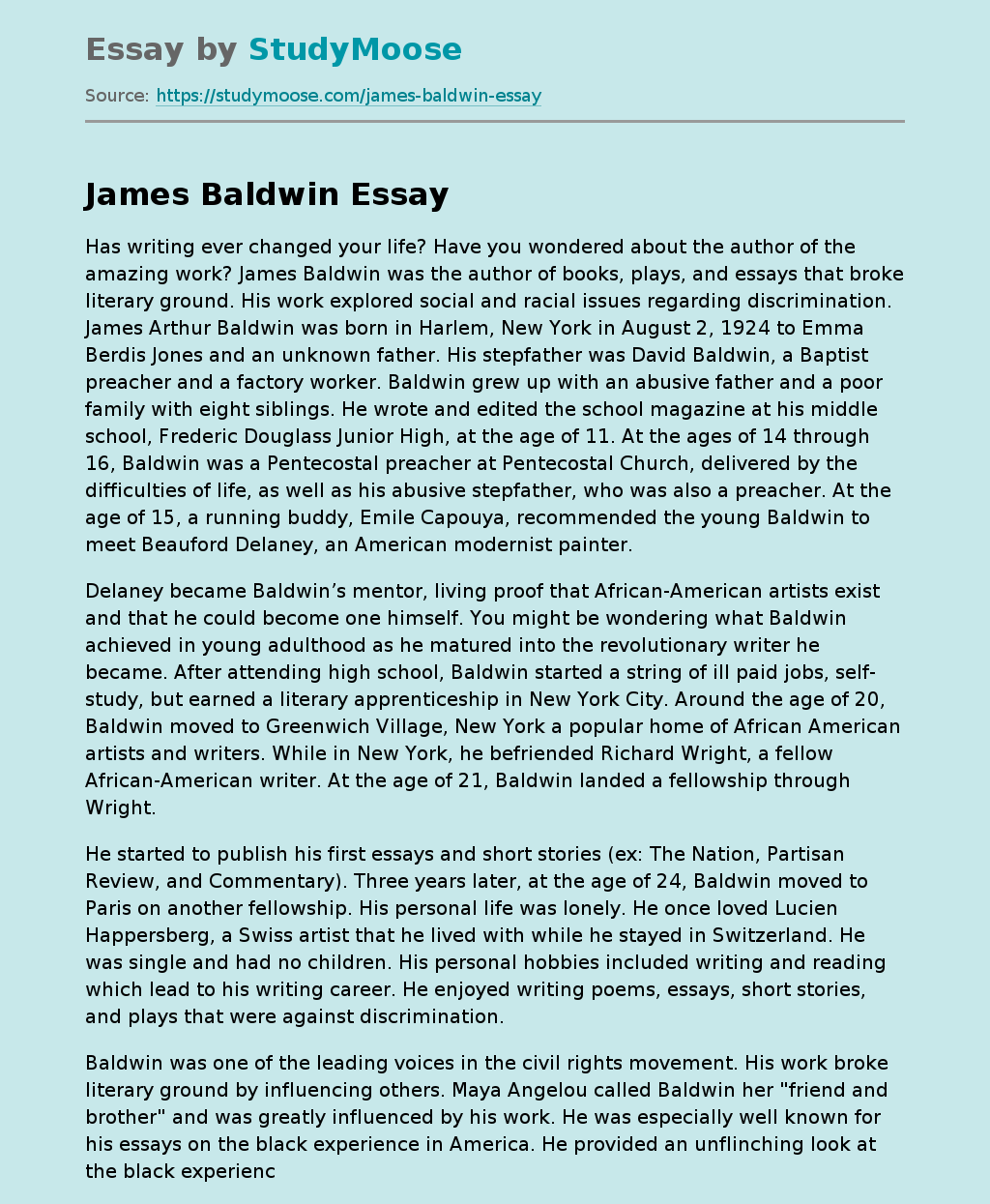