Jack the Ripper - Why did the Whitechapel Murders Attract so Much Attention?

Jack the Ripper is probably the most infamous serial killer the world has known. He was the first recorded serial killer to be known in Britain and his killing’s shocked not only the British public, but the people of other nations to. Communication was basic in 19th century but news of Jack the Ripper spread worldwide. The fact that Jack the Ripper was never caught further gave the media the opportunity hype up stories and create a major panic. As news papers do in modern society, stories were exaggerated beyond truth.

Don't use plagiarized sources. Get your custom essay on
“ Jack the Ripper – Why did the Whitechapel Murders Attract so Much Attention? ”
Get custom paper
NEW! smart matching with writer

This attracted more buyers for newspapers and any one who was slightly suspicious was accused of being the Ripper.

At the beginning of the murders nobody seemed to care about the fact that all the victims were prostitutes and that the reason for their murders were motiveless, however soon after many people began to recognise the coincidences between the victims mutilations and horror of each murders attracted a high magnitude of attention after this.

Proficient in: Jack The Ripper

Whitechapel was a downtrodden area in the East-End of London.

The streets of Whitechapel were filthy and the smell of sewage and excrement filled the air. There were many alleyways and back roads to navigate the East-End.

This made it easier for criminals to operate and carry out criminal activity. The population of the East End in 1888 was about 900,000. The police estimated the number of prostitutes in the area was around 1,200. Poverty was also very high in England at the time, especially in the East End of London. It was suggested that men from the West End of London (then the richest area), only came into the East-End for prostitution and other illegal activities. People from outside the East-End saw Whitechapel as a dirty haven for drunks and prostitutes. Newspapers described Whitechapel as an ‘apocalypse of evil’.

Others saw the people of Whitechapel as dirty, diseased and penniless. Crime was the main game in Whitechapel, this and violence also tarnished the ever-so-bad reputation of the East End. Jack’s first two victims were prostitutes, and were found with their throats slashed and several stab wounds. The first victim was name Mary Ann Nichols. She had last been seen exiting her work house after running out of payment money. Her mutilated body lay lifeless on Buck Row, Whitechapel in the early hours of Friday 31st August, 1888. Annie Chapman the second victim had her small intestine removed. Her body to, had been found mutilated.

She lay dead in Hanbury street, Whitechapel. She was found in the early hours of September 8th, 1888. By now the details of the murders had created a media frenzy as the women had similar features. The Modus Operandi of the murders was also very similar; making the police connect the two murders. This made people suspicious that a serial murderer was loose, preying the East End streets. The quick reaction to the second body also showed that the police were expecting another murder in the Whitechapel area. The third and fourth victims were killed on the same night sparking more controversy.

The newspapers dubbed it ‘The night of the double murder’, causing more panic and attention. The next two victims were also prostitutes and there throats were slashed. They had both occurred on the late night of the 30th of September. Strangely, the third victim was the body which was not mutilated; this suggested that the ripper had been disturbed. The fourth body had signs of mutilation and was found and hour after the third body. The names of the two victims were Elizabeth Stride and Catherine Eddowes. Lizzy Stride, as she was known, was a Swedish prostitute.

She was last seen exiting a pub with a male stranger. She was found dead later that night. Catherine Eddowes, the fourth victim, was last seen exiting a police station where she was being held for drunkenness. Later that night she was found dead ten minutes from the station in Mitre Square, Aldgate. From her corpse it is said a trail of blood led to a wall where the message, ‘The Jewes are not men to be blamed for nothing’, was written in chalk. This vital piece of evidence was scrubbed off and never used. This also created major suspicion of the Sir Charles Warren.

It was said that he believed that if people see this message the Jews who populated the east end of London would be targeted. However people had doubt about whether this was true and this gave the newspapers another story to tell. The news had been linking various suspects to each case and it was believed there was a Masonic connection. As Warren was a mason himself the newspaper indulged in writing more stories and exaggerations. The incorrect spelling of Juwes meant to be ‘Jews’ was linked by the newspapers to the 3 Jewes of Solomon’s temple who were masons, Jubela, Jubelo and Jebulum.

Again this sold more papers and worried citizens as the Masons were regarded as dangerously weird people. The fifth and most horrific murder of ‘The Autumn of Terror’ was that of Mary Jane Kelly. Her internal organs were removed and each one of her breasts was sliced off. What was different about this murder was that Mary was found dead and slaughtered in her own bedroom, in Miller Court. Kelly was also the youngest of Jack’s victims. Mary Jane Kelly was a limerick born prostitute. She was last seen singing drunkenly in the streets. She was found by her landlord brutally butchered on her bed.

Some of her blood had been smeared on the surrounding walls and her two severed breast lay on her side-table. The natures of each murder were so horrific and unheard of, that even greater public attention was attracted. Common murders comprised of stabbing or choking a victim, but these were even more severe and brutal. They were all short murders with little time to carry them out except the last one, and all had their throats slit. The public feared a murder was wondering the streets of East London. The media used this fear to sell more newspapers and therefore make more money.

These coincidences linked the murders together and sold more newspapers. Because of the coincidences this gave the media further opportunities to write articles riddles with rumours and due to this more people wanted to know the newest information or rumour that circled the streets of London, therefore selling more papers. The news of the murders had spread worldwide, as this was the first known case of homicidal serial murders. The Whitechapel residents were so afraid that they did not go out on the streets at night. As in our day and age whatever the press wrote people would believe.

The press often questioned police on why they hadn’t captured the Ripper. This fed the public’s anger and fuelled the emotions as to why these mysterious murders were happening in their city. The police and newspapers had received many letters claiming to be from the Ripper. These letters added to the confusion and intrigue as to who Jack really was. Some were examined and thought to be real. Many were classed hoaxes but the newspapers still published them to sell their story and make money. One package even contained a kidney said to be that of one of the victims.

One letter that was said to be real was the ‘Dear Boss’ letter. This letter was signed ‘Jack the Ripper’. The dear boss letter gave the killer his infamous name. The gazettes didn’t care whether the letters were genuine or not. They still shook the police and the public. The letters helped shift newspaper and create more attention. In my opinion, one of the reasons the Ripper murders attracted so much attention was because of the newspapers that were out to make money. They deliberately printed article they new were not true and this attracted the attention of the world eyes.

Another reason the murders attracted so much attention was because the people of London were not used to serial homicidal killings. In modern societies these things are more common but back in Victorian London it was a new era for crime. The brutality of the murders also caused a lot of attention in my opinion. Even in our societies today where murders are more common, such murders where victims are slaughtered like animals would create a lot of news coverage and public attention. In all I believe it is all this that made the Whitechapel murder receive so much attention.

Jack the Ripper - Why did the Whitechapel Murders Attract so Much Attention?. (2020, Jun 02). Retrieved from https://studymoose.com/jack-the-ripper-why-did-the-whitechapel-murders-attract-so-much-attention-essay 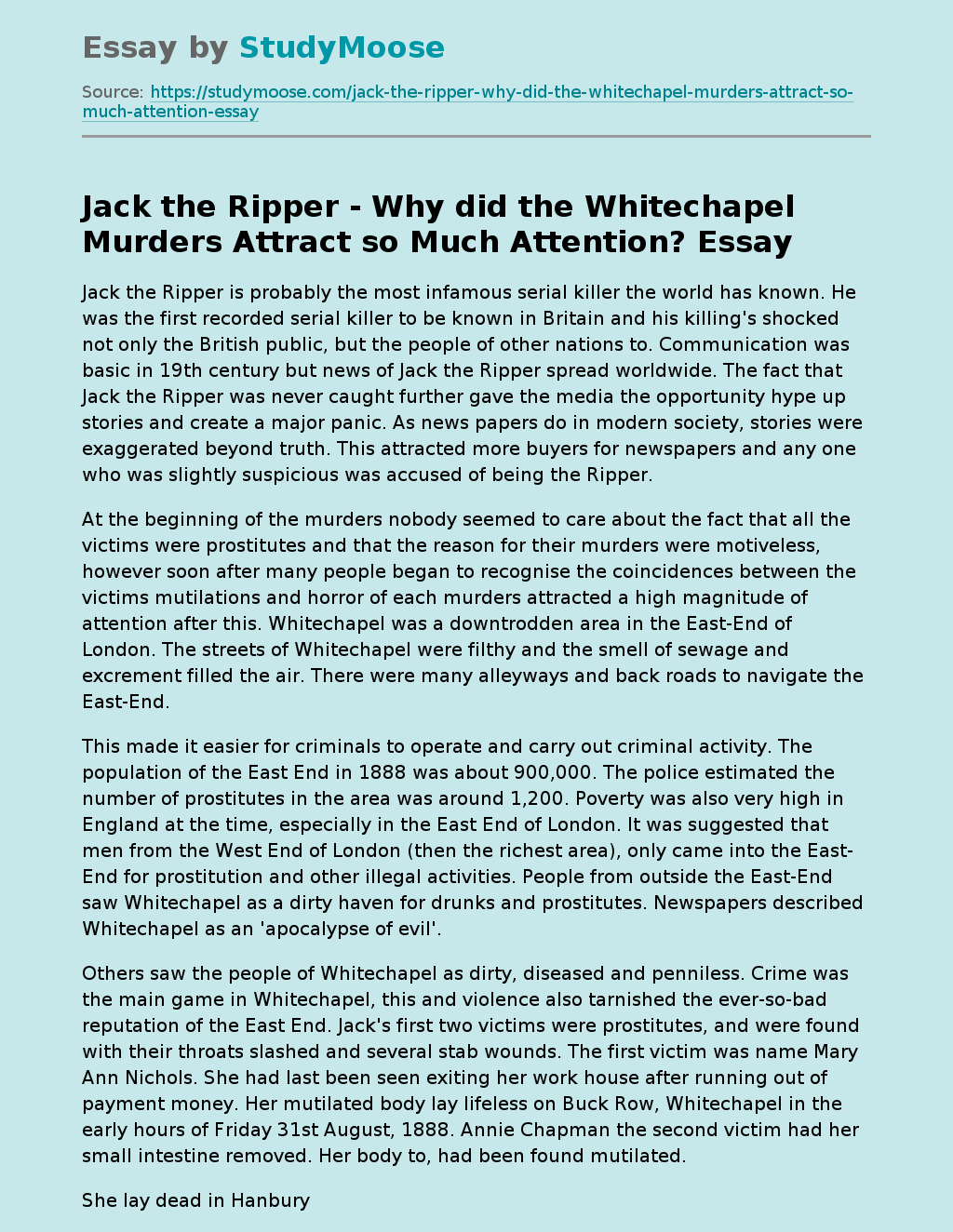