Italy during the Renaissance

3. How did the fact that other countries in Europe had strong rulers affect Italy’s fate? Compare and contrast the king of Spain’s treatment of Italy with that of the king of France.

Don't use plagiarized sources. Get your custom essay on
“ Italy during the Renaissance ”
Get custom paper
NEW! smart matching with writer

The Spanish became a dominant force in Italy. The richness of Italy attracted the french king, who invaded the kingdom of Naples. Spanish agreed to help Italy against the French. They fought for 50 years to dominate the region.

5. What could fresco artists convey that medieval painters could not? How does their work embody characteristics of humanism? Fresco artists would paint on the ceilings of churches. Medieval painters would not do that because they already had stained glass windows. Both types of artists were inspired by greeks and romans, and their work represented a human-centered world.

6. How did Leonardo da Vinci learn to depict the human form? What goal did he share with other High Renaissance artists? He would dissect human corps to understand their origins.

All High Renaissance artists wanted to represent human bodies the most exact and realistic as they could.

7. Why did Florence enjoy a flourishing of the arts in the 1400s? Florence was a wealthy state during that time and the Cathedral of Florence was built.

9. How did Early Renaissance artists learn to create more realistic art than their predecessors? Because they studied the technical side of painting. They understood laws of perspective. The organisation of outdoor space. They figured how to give effect of light through geometry and the investigation of movement. Human anatomy.

10. What ideal of Renaissance art does Alberti single out in his description? His idea was that the man was the centre of the Universe, limitless in his capacities for the development, and led the notion that men should try to embrace all knowledge and develop their own capacities as fully as possible.

11. Medieval architects were anonymous. Brunelleschi became famous. What humanist principle does this shift in attitude reflect? It reflects that the human is capable of doing many things by embracing their knowledge, just how Brunelleschi did by building the Done.

12. Explain how the Renaissance was a rebirth. Analyze the ways in which it imitated and differed from the cultures that inspired it. It was a rebirth of European learning and art because it was a resurgence. This disappeared but reappeared on the Renaissance. The ancient Greeks and Romans’ culture inspired the Renaissance, but there was a lot of advances such as the perfectionism of the printing press. There was also humanism and the protestant reformation.

Italy during the Renaissance. (2016, Jun 14). Retrieved from https://studymoose.com/italy-during-the-renaissance-essay 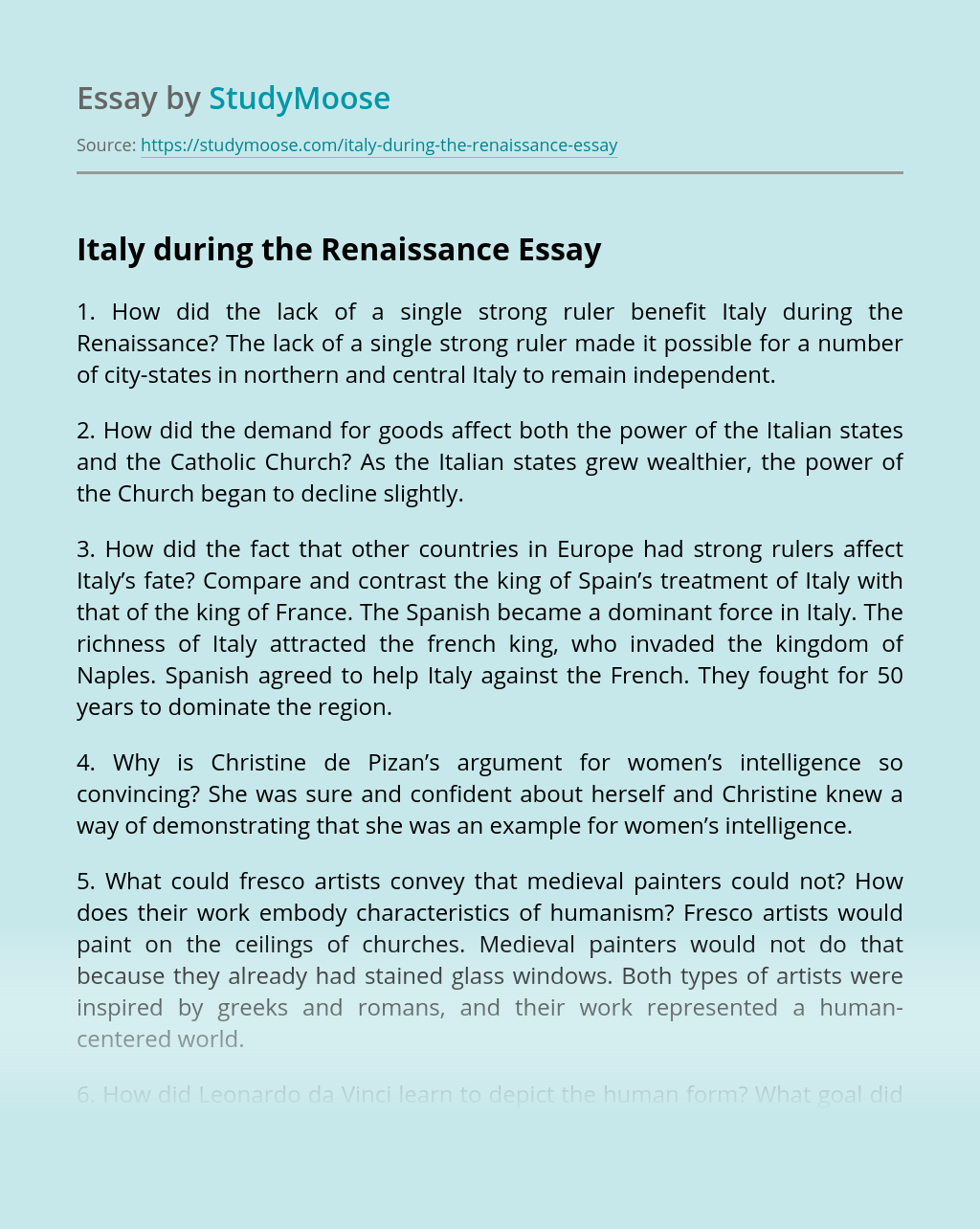