Turn in your highest-quality paper
Get a qualified writer to help you with
“ Italy During Renaissance Period ”
Get high-quality paper
NEW! AI matching with writer

Renaissance” comes from the French word that means “rebirth. ” This time period is named and studied because of its unique art, literature, and music. It is also known as society’s modern age. The Renaissance was a period of great cultural and technological changes which swept Europe from the end of the 13th century. It was integral in developing Europe was subjected to different changes there were two primary renaissance which were most notable. They were the Italian and the Northern renaissance.

Both of the renaissance had a profound impact on Europe.

But they also had some typical differences among them and each was unique in its own way. Early in the 14th Century, Italian scholars started to study the ancient cultures that preceded them, like those of Greece and the Roman Empire. This scholarly interest would lead to the Italian Renaissance. Italy and Europe was ready for change after the harrowing destruction of the Black Plague in the Middle Ages. Florence, Italy, was the home of the start of the Renaissance.

After the collapse of the Roman Empire, culture, politics, and the arts had only been in decline.

Petrarch advocated learning about Italy’s Latin and Roman history. The Pope and the royalty liked this idea, so other scholars begun to study in the same vein. These scholars valued the accomplishments of the Romans, but they wanted to improve on their society instead of blindly trying to recreate the same thing. These scholars wrote books that would stimulate Italians’ thinking and give them a new purpose. Italy was divided into distinct city-states, which gave them a more modern, and regional, cultural outlook. The city-states thrived, banking increased, and trade became more important.

As Italian society became wealthier, they could strengthen their culture and their ideologies became entrenched. Wealthy people had the means to patronize and fund artists. Scientific development spurred Humanism as well as some of history’s most important artists. Architecture evolved beyond the Gothic. The Renaissance period is considered the intellectual birth of modern society. Most thinkers were concerned with humanity and how to become a good and honorable person. The European, but not Italian, renaissance period is called the Northern European Renaissance.

Similar growth in society and culture happened in Northern Europe as occurred in Italy during this time. This architecture did not change munch in the beginning, and did not stray far from the Gothic style that preceded it. Humanist changes resembling those in Italy also happened in the culture of Northern Europe. The Italian Renaissance focused its questions on humanity and man’s ability to grow and develop. The Northern European Renaissance, though, focused on the secular reform of society and government.

As Italian society changed as a result of their Renaissance, the people of Northern Europe became uneasy with Rome and the Pope’s control of their church. They thought that Italian powers had slipped away from traditional, strict, Christian belief and dogma. They began to strive to reform the church. The Italian Renaissance and the Northern European Renaissance did not happen in exactly the same ways. Italy grew and prospered with their city-state governance, while an aristocracy still controlled Northern Europe.

Wealthy Italians patronized the arts, while in Northern Europe the arts were funded by the rulers and the church. Renaissance period art was bright and realistic, and the art of the Northern European Renaissance also followed this Italian style. Artists in Italy tended to work on paintings, sculpture, and architecture. In Northern Europe, artists created furniture, tapestries, and manuscripts. Europe’s wealthy had a lot of homes; they needed a lot of furniture and decorations. Literature in both regions was concerned with humans and humanity.

Italian art used scenes from religion, mythology, the natural world, and eroticism. Northern European artists made portraits, scenes from the Bible, and tapestries. Aristocrats and the church owned most of the artwork. Below and to the left is a tapestry woven during the Northern European Renaissance called The Wedding Dance. This tapestry was made by the artist Peter Brueghel from the Netherlands. Not many pieces focused on the lives of everyday people as this one did – most were religious in nature instead. The work below and to-the-right is emblematic of the Italian Renaissance. It was pained by Giorgio Vasari. 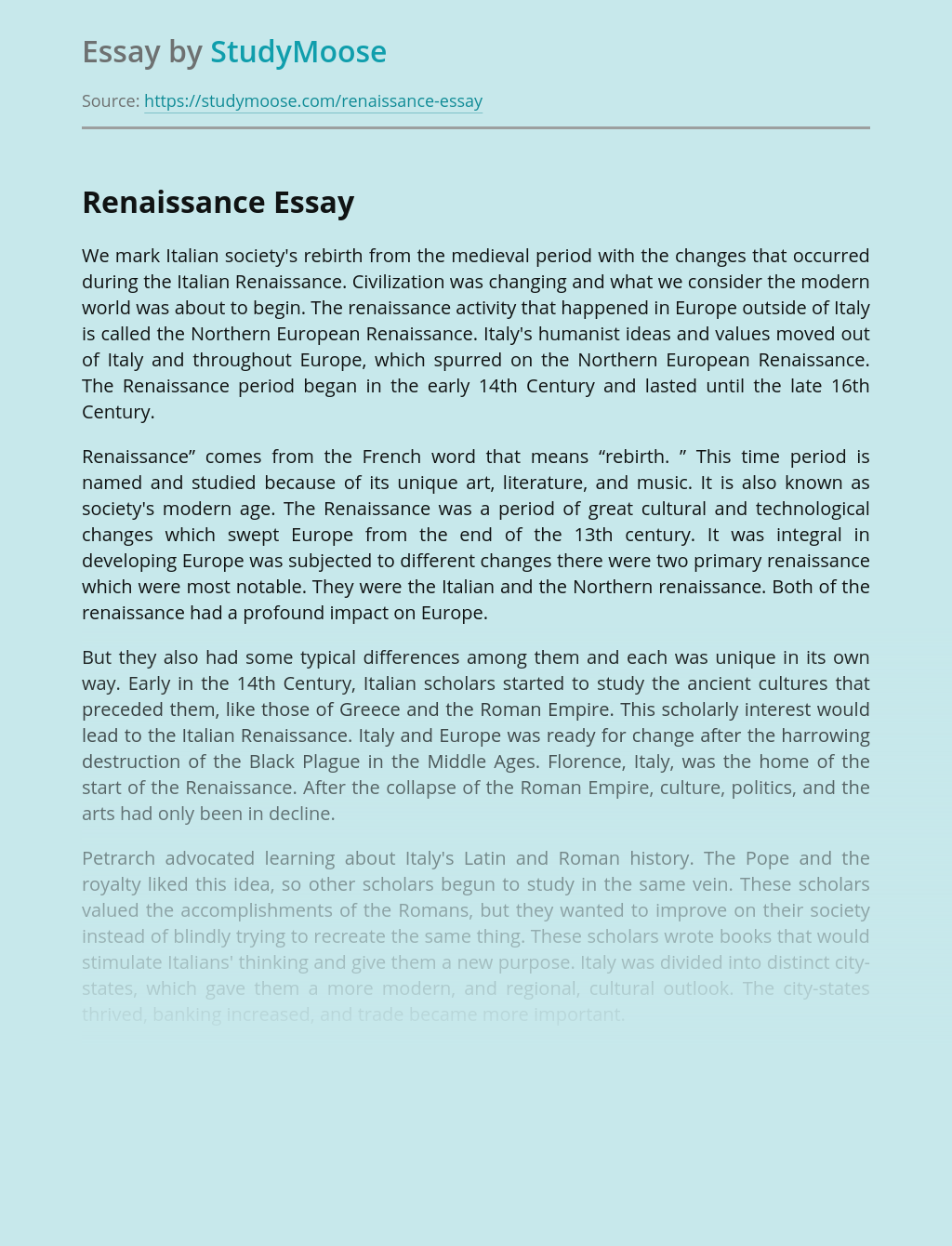 Turn in your highest-quality paper
Get a qualified writer to help you with
“ Italy During Renaissance Period ”
Get high-quality paper
Helping students since 2015
Stay Safe, Stay Original