The Renaissance was a cultural movement that significantly influenced the intellectual life in Europe from the 14th to the 17th century. It started in Italy in the Late Middle Ages and then spread to the rest of Europe. The Renaissance affected philosophy, religion, literature, art, politics, science and other aspects of intellectual life. Historians consider the “Renaissance not only an era of grand cultural achievements; it was also a period that witnessed an intensified sense of identity and individuality, at least among European elites” (Martin, 2003, p.

Don't use plagiarized sources.
Get Your Custom Essay on Italian and Northern Renaissance Just from $13,9/Page

The guild helped shaped the craft of artists through training and support. Another similarity between Italy and the north was the presence of an artistic center during the 15 century, with Florence as the artistic hub in Italy and Flanders as the art center in the north. There were many differences between the Italian and Northern Renaissances. First, the north emphasized more on the Gothic art and architecture as compared to Italy. Northern architecture remained Gothic until the 16th century.

Another difference is that the north Europe had lesser centers of free commerce as compared to Italy which has many wealthy merchants who spend money and time on art. Renaissance artists in the north also took a different approach to composition. While Italian artists were open to scientific principles behind composition, northern artists were more concerned and focused on what their art looked like. Northern artists emphasized individualism and did not merely base their ideas on Italian artists.

They “drew on a rich native past and were able to incorporate exciting new ideas from Italy into their own vision of the world” (Cunningham and Reich, 2005, p. 337). Northern Renaissance was also different from the Italian Renaissance in terms of the centralization of political power. While independent city-states dominated Italy and Germany, several parts of central and Western Europe emerged as nation-states. The north was more nationalistic in character due to the increasing power of the national monarchies.

The north was also more religious in nature as reflected in their art. Northern humanists focused on the Bible and early Christian themes. They also emphasized an ethical way of life and believed that classical and Christian cultures should be combined. Another major difference between the Italian and Northern Renaissances is that the north was more closely associated with the Protestant Reformation and more involved in the conflicts between various Protestant groups and the Roman Catholic Church.

This is the main reason why the Protestant Reformation would take root in the north instead in Italy. The Protestant Reformation was a Christian reform movement that attempted to reform the Catholic Church. Many members of the movement were western Catholics who were dissatisfied with the doctrines and malpractices within the Catholic Church, especially the teaching and sale of indulgences and the practice of buying and selling church positions.

Northern humanists were the first to call for the reform of the Catholic Church. Desiderius Erasmus and Sir Thomas More, two major figures in the Northern Renaissance, openly criticized the Church. Erasmus developed a simple theology of Christian love, while More’s criticism of the papacy and the abuses of the Church became the foundations of English Protestantism. Their advocacy fueled the ideals of Martin Luther who initiated the Protestant Reformation. 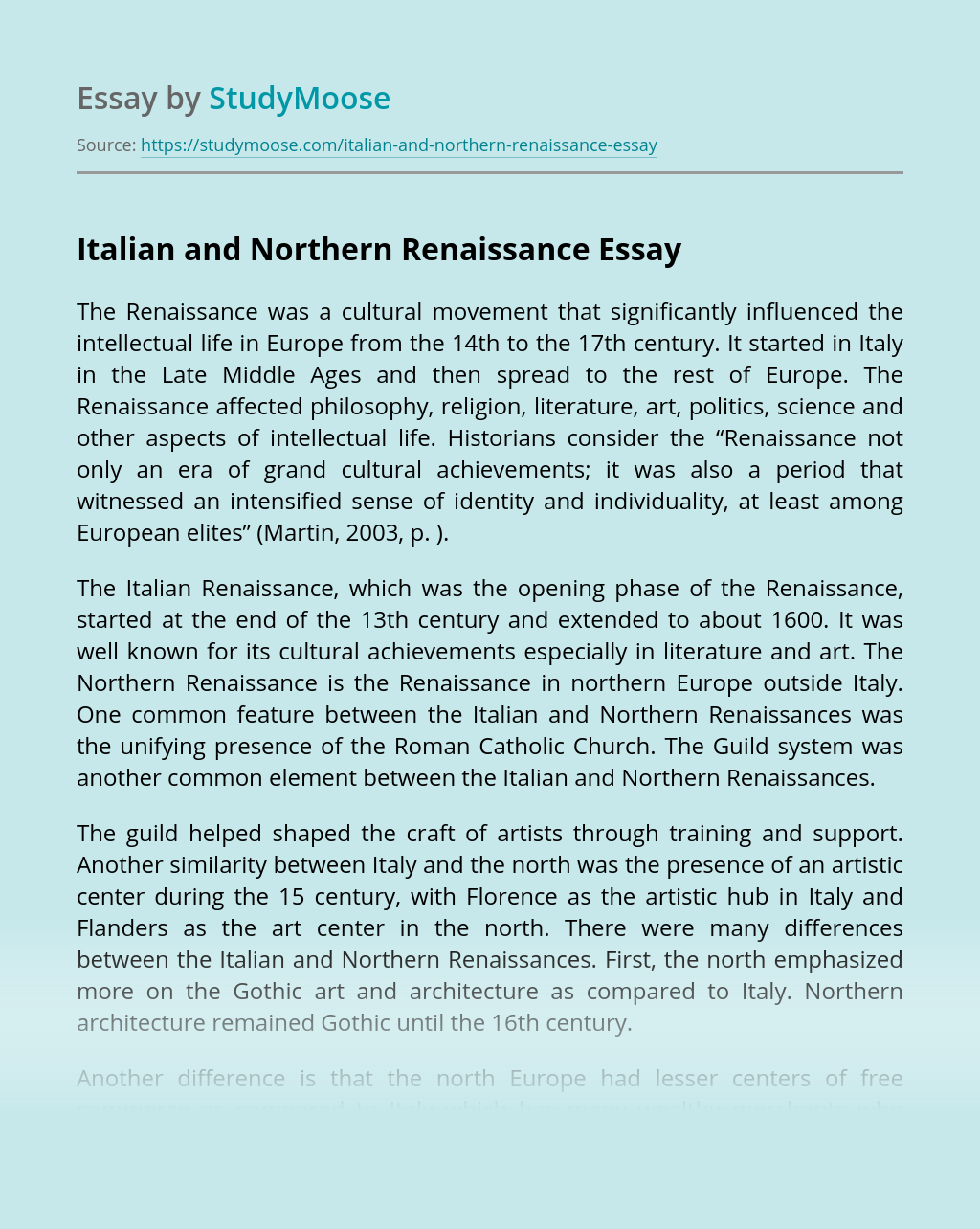 What is it all about? – it is all about the period, age or era after the fall of Roman Empire and the beginning of “rebirth” or the Rennaisance period. – it is the bridge with these two very important eras in literature. What is the meaning of medieval and period? – the term medieval...

View sample
Analysis of “The School of Athens” by Raphael

Raphael, the youngest of the three great artists who defined the Italian High Renaissance, was born in the small yet artistically significant Central Italian city of Urbino. It seems that Raphael attained his natural gift of creativity from his father who was a poet and a painter. Orphaned at an early age, Raphael was sent...

How does Bel-Imperia’s behavior contradict Juan Vives’ Instruction of A Christen Women? The Spanish Tragedy by Thomas Kyd, a play about revenge, honor, love and tragedy, was published in the late 1580s. A little before its publication, The Instruction for a Christen Woman by Juan Luis Viveswas published in 1524. During this time, the roles...

View sample
Italy during the Renaissance

The Renaissance was a cultural movement that significantly influenced the intellectual life in Europe from the 14th to the 17th century. It started in Italy in the Late Middle Ages and then spread to the rest of Europe. The Renaissance affected philosophy, religion, literature, art, politics, science and other aspects of intellectual life. Historians consider...