It is amazing how many things can change in one year, I think while on a plane about our wedding day. Everything was so good and we were so happy. I wonder what happened and how things turned out like how they have. I wish I could view the last year of my life as a book and try to understand exactly what went wrong and where. I console myself as I try not to cry, telling myself that some things are only not meant to be.

Don't use plagiarized sources. Get your custom essay on
“ It is amazing how many things can change in one year I ”
Get custom paper
NEW! smart matching with writer

I wonder if things had been different if I had acted out differently.

We had only been married a year and 3 months, and we were happy as any married couple could be, or I thought we had been happy. I now know that my husband was not as happy with our marriage as I had thought he had been. I think maybe it was his friends, or his mother who influenced him so much, whatever the case was, he suddenly started feeling that he had made a big mistake by getting married.

That we got married too young. He had this idea that marriage was a big trap and that he was slowly losing

his independence. He thought that he was going to end up being a useless and ugly part of this society if he continued to be married and kept on living as he was living. I tried to talk to him, but he would tell me that it was not my fault and there was nothing wrong with me that it was him.

He told me that he simply felt constricted and that he needed to live his life on his own.

He needed to live for him. Those were his exact words. I remember that exactly because my heart broke that day. I remembered how we used to be before we got married. Everything was so simple and easy. Jacob would tell me how much he loved me and how much he wanted to have a home with me. We would name our children that had yet to exist. He would tell me his dreams of being a cop. We would laugh and talk all night. Sex was wonderful and often. He told me that he loved me, wanted to spend the rest

of his life with me, grow old with me, and have children with me. I told him that I loved him too. After a failed marriage before I wanted this marriage to work. I married for forever.

And only after a year and 3 months of marriage, he was tired of me. He said he was going to the store for some booze, and he will be back in an hour or two. All night had passed by. He came home smelling like booze, had none in his hands though. Where did he go? He was with another woman no doubt. He swore he was faithful. How can I believe him though? A thousand, thoughts in my head. If I simply show him, I love him, he will stay. He can do better than me though. My head struggled with

my thoughts. How can I forgive him? I have to forgive him. The next morning, he took me to sign divorce papers. I did not believe this marriage was over. I fought for my marriage, and I fought hard. I wouldn’t give up. I will be here waiting when he would return. I kept thinking what would he say when he came back. Would he still want to leave me with me trying so hard or would he tell me that he had made a mistake? Either way, it was torture not knowing.

I sold everything. I gave up. I did what I swore I wouldn’t do, and I stopped waiting for him. It took me about a week to decide if I wasn’t worth it to him that I didn’t want him anyways and to form some plan to move on. I bought a plane ticket to halfway across the country and vowed to never return. I needed a ride to the airport though. The least he could do after all we had together was drive me there. Two hours in the car together felt like an eternity. We had lunch and coffee and laughed

and felt like we hadn’t felt in a long time. I guess the stress of the divorce and life just weighed us down and now, we were free of it for a moment. It was as if nothing had happened. It made me sad to see it go. Knowing that soon I was going to be leaving. Those things could be that way again and to see the hope and walk away. He kissed me at the airport and said goodbye and left. He didn’t turn around to see me walk away, but I watched the love of my life walk away from me that day.

So, I thought. I thought he walked away to never return. Three days, after I arrive at my destination and got settled in I was sleeping it was about two am my time and I started receiving text after text. It was Jacob “I am so sorry darling. I do not know what came over me. I was not thinking straight. But spending these past few weeks away from you has made me realize that I really do love you. I was a fool to think that I had made a mistake by marrying you. Could you ever forgive me?”. I had to forgive

him. Despite everything that he did to me he was the man I love. That trip to the airport made us fall back in love with each other.

It is amazing how many things can change in one year I. (2019, Dec 09). Retrieved from https://studymoose.com/it-is-amazing-how-many-things-can-change-in-one-year-i-example-essay 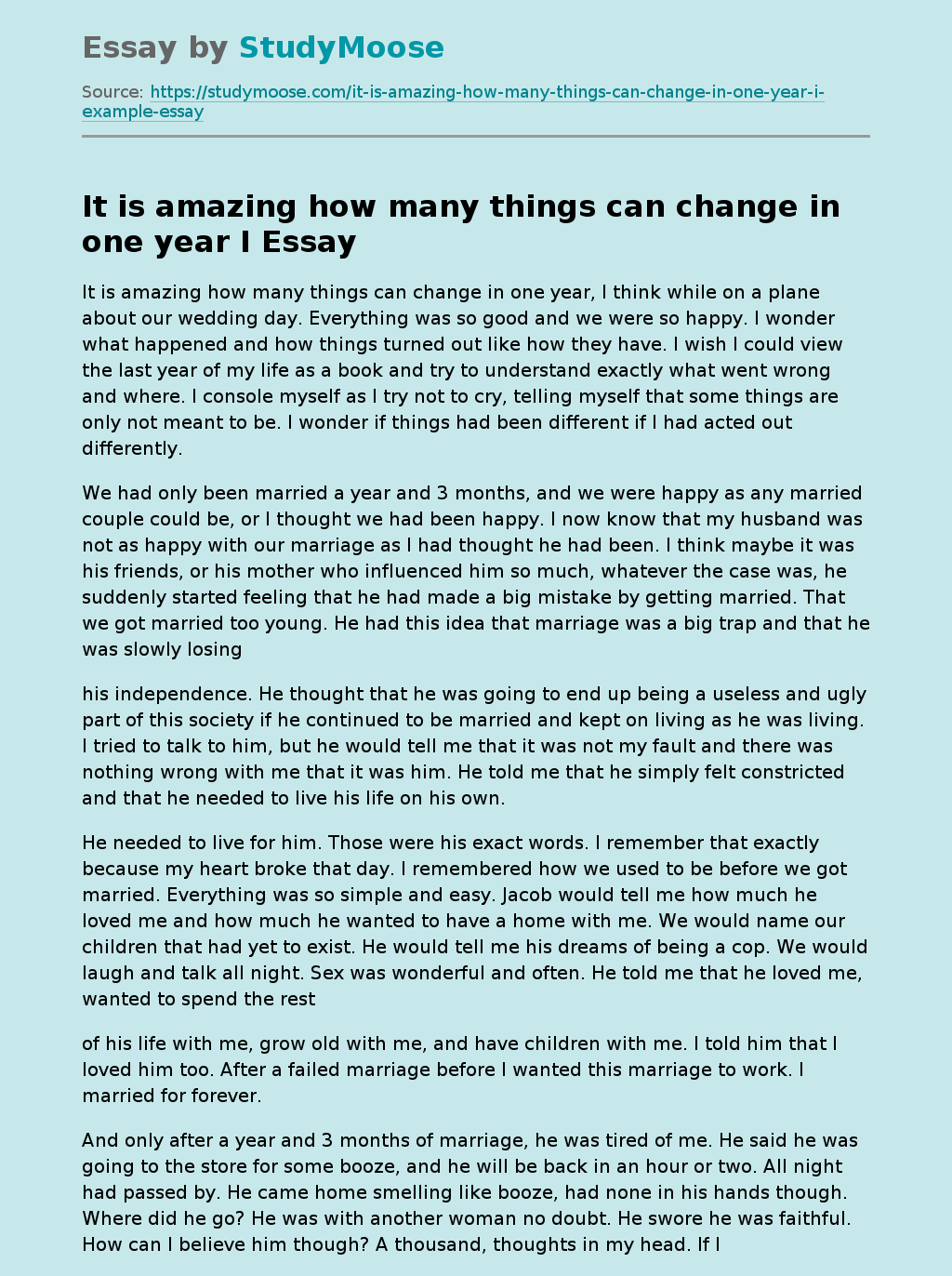