Gun control is an issue that has been brought to the public’s eyes in recent years. Until 1968, guns were available over the counter, at stores and through mail catalogs to just about any adult in America. This is an example of how loose gun regulations were. In America today, the National Rifle Association has stepped up to take full responsibility of gun regulation. The question is, are they really stepping up as the real deal or are they just another organization out to make money and in the process make things worse.

Don't use plagiarized sources. Get your custom essay on
“ Issue of Gun Control ”
Get custom paper
NEW! smart matching with writer

Jillian Banner, in ‘1 Million Americans Will Be Shot in The Next Decade’ presents trauma surgeons’ argument that gun violence is a rapid growing disease but it is still treatable. Banner interviews various trauma surgeons from the disease control and prevention department. These doctors all hold a strong belief that gunshot violence is becoming a very serious problem in our society. In one of the interviews, she talks with Dr.

Sakran, Director of Emergency general surgery at John’s Hopkins hospital who comments that ‘some wounds they see despite the best medical instruments, they are not able to save the people’. Her article also goes on to further explain the troubles encountered by the doctors from the NRA. She introduces us to NRA’s belief that doctors should stay in their lane and they enforce this belief through an amendment passed by Congress in 1996.

Overall, her article shows the ongoing war of opinions between these two organizations, where one believes that prevention is better than cure to stop gunshot violence while the other believes that their counterparts should stay in their lane and stick to fixing wounds.

In the conclusion of her interview, we see Dr. Sakran warning the NRA that gunshot violence ‘is not a Democratic issue, it’s not a Republican issue. It is an American issue. And it’s a uniquely American problem’. This statement in turn further emphasizes the doctor’s disapproval of the NRA’s cultural belief.

I completely disagree with the NRA’s view that doctors should not be involved in advocating gun control. The NRA says that they are doing their best and yet, in Jillian Banner’s article published on Atlantic documentaries ‘How the NRA sparked a medical rebellion’, we see trauma surgeons predict that one million Americans will be shot in the next decade. This sad prediction is enough to show how poor the NRA’s gun policy is. In America, gun ownership is seen as a culture. People believe that it is their duty to exercise their right to bear arms in accordance to the second amendment. To show how deep a culture this is, North American reporter, Anthony Zurcher writes an article titled ‘Gun Culture in America’.

In this article, he presents a survey which was carried out in 2017 that shows that about 40% of Americans say that they own a gun or live in a household with a gun. To support this claim, he points out that there are 120.5 guns per every 100 American residents. He then compares these statistics with countries such as England, Canada and Wales which have stricter gun control laws. And a negative result appears. Ultimately, out of these three countries, the United states had a whooping sum of 73% more murders and homicides due to gun violence. So ask yourself, how did the guns used for these murders come into circulation in the first place? Well, the answer is obviously the NRA. The NRA sees this culture as an opportunity to exploit the peoples’ belief and make monetary gains by letting guns loose. They also claim that guns are needed for protection which is true to some extent. For this reason, they let almost anyone get guns regardless of their past records or mental state. While doing so, they forget that not only can guns be used for protection, but they can also be used for destruction.

On the other hand, the doctors who treat the wounds inflicted by these loose guns are the ones who truly understand the effects of guns on the life of the individuals who have been shot and also the lives of the people who are closely associated with these gunshot victims. Due to this understanding that they possess, doctors should be allowed to help create and advocate preventive measures in regards to gun control. I also agree that they should play a major part in gun control because they have proved themselves once before in the past when they were dealing with the issue of road accidents.

During their efforts to control the risk taken by drivers while driving, Dr. C. Hunter Shelden, a neurologist in the 1950’s came forward and brought about seat-belts as a way to prevent people from suffering head trauma during auto accidents. For this reason, I believe that doctors, the life savers, if given the chance and funding will be able to help the society as a whole survive this national epidemic known as gun violence.

Issue of Gun Control. (2020, May 09). Retrieved from http://studymoose.com/issue-of-gun-control-essay 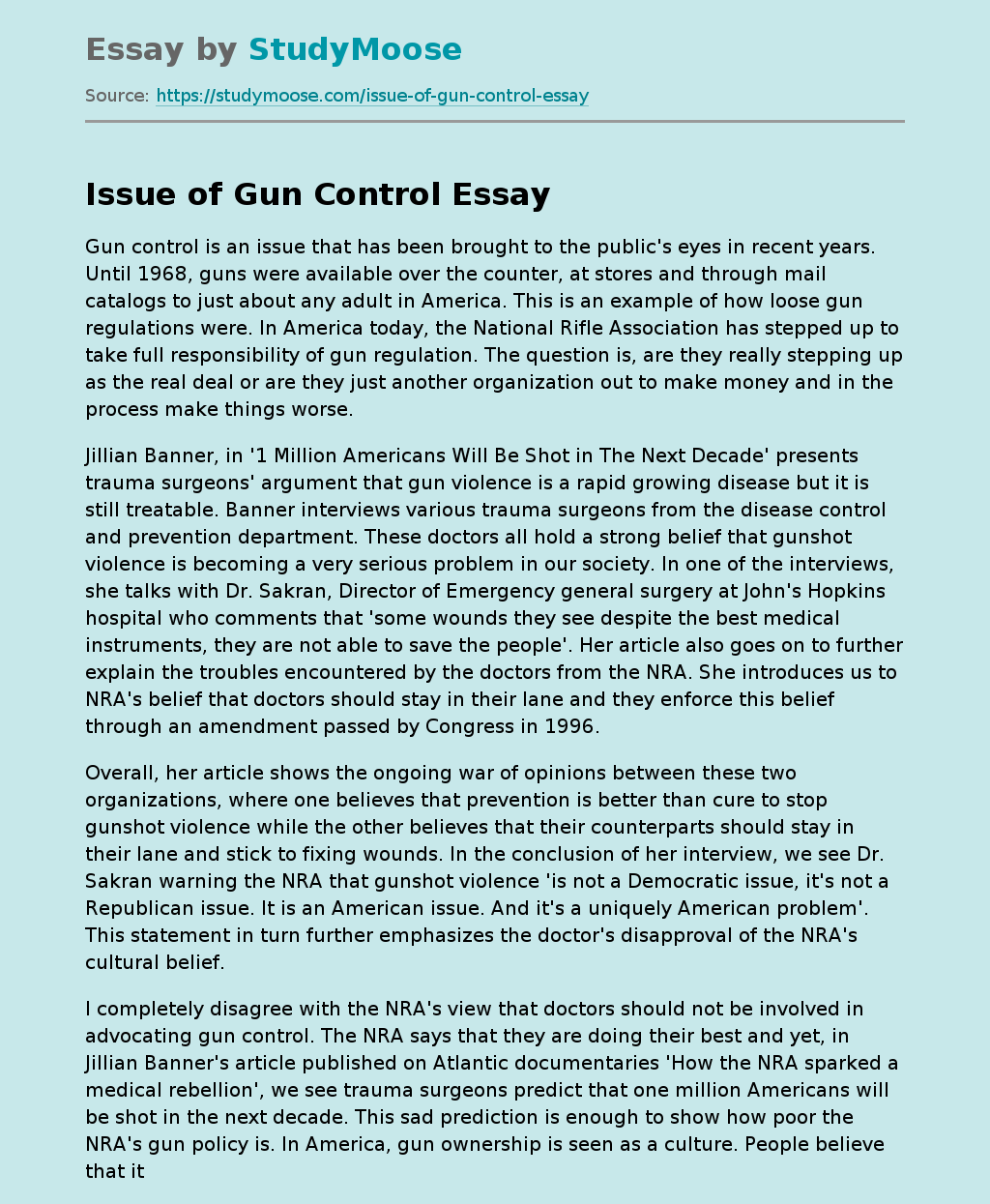