Islamic Country Business Practice Are Differ from Us

When a business organization is capable and qualified enough to meet up the national demand then they can operate business crossing to the border. When a company operates is business activities more than one country having its own branch office in the host countries then it can be called international business.

Don't use plagiarized sources. Get your custom essay on
“ Islamic Country Business Practice Are Differ from Us ”
Get custom paper
NEW! smart matching with writer

As multinational business is operated in more than one country so there must be an influence of the several host countries to operation and functional activities of the business. When business practices are doing between Islamic country and United States that time we faces some different between those countries. And those are as follows:

Language is the first and foremost aspects of international business. As every country has its own language.

They obviously prefer that their language is highly evaluated. Moreover to make them understand it is better to express them in their own language. For Islamic country their local language is Arabic, Hebrew etc. and on the other hand English is the local language in U.S. if they each other language then as a result their profitability will be increased and the growth of the business practices is ensured.

Laws are based on the Muslim Holy Book, the Quran. The system is often known as “Sharia” but their business rules and regulation are not so strict.

In United states their laws are very strict for export their product in other countries for this strict rules and regulation it decreased other countries to import product from them. It make difficult to business practices between Islamic country and United States.

Religion is also an essential part of a country’s culture which influences business. Islamic countries people are Muslim religious and U.S. people are as Christians, Jews religious. If we want to express it in the way of fashion like western fashion and eastern fashion. Muslim countries like to weal long veil or covered dress whether the western countries like to wear short dress pattern.

Islamic countries people are pray five times in a day, they doing fast a whole month of Ramadan, and they follow Friday as holiday. But in U.S. countries celebrate Christmas day and they follow Sunday as holiday. And those different make critical to business practices between Islamic countries and United States. Education also plays a vital role in their purchasing power as well as their attitude and consumption patterns too. If they people are educated in a country the income level and quality awareness must be higher. They will not be price biased rather than they would be quality biased. This thing also differ business practices between Islamic country and United States.

The Islamic countries people are tend to be very hospitable and regard treating guests with generosity and warmth as a point of personal honor. The common practice in Islamic country is to shake hand at first meeting and again upon leaving. In Islamic country people maintain closer physical proximity while taking and conversation often involve more physical contact than is common in the United States. When a guest in an Arab person’s home, avoid giving gifts of food or drink. Through this may be common practice in the United States, in the Middle East such gifts imply that the host is inadequate.

The weather pattern is also an important aspect of international business practices. For example the clothing pattern of cold country and the high temperature country will not be same. As well as the cosmetics pattern of the clod and hot weather country will not be same. Most of the Islamic country weather is hot so when U.S. goes for their business practices those countries they must match the weather.

Business practices are also differing by population, income rate, economic growth rate, heritage so many things are related with business.

In fine it can be said that to operate international business efficiently we must have sufficient knowledge of their cultural pattern, their attitude, buying pattern, behavior, response to a decision, sensitive issues of their culture, their belief, and always be prepared to handle any sorts of uncertainty to overcome them. Then we can hope the growth of the business firm in the foreign country in competitive environment and their changing pattern as well durability.

Islamic Country Business Practice Are Differ from Us. (2016, Dec 21). Retrieved from http://studymoose.com/islamic-country-business-practice-are-differ-from-us-essay 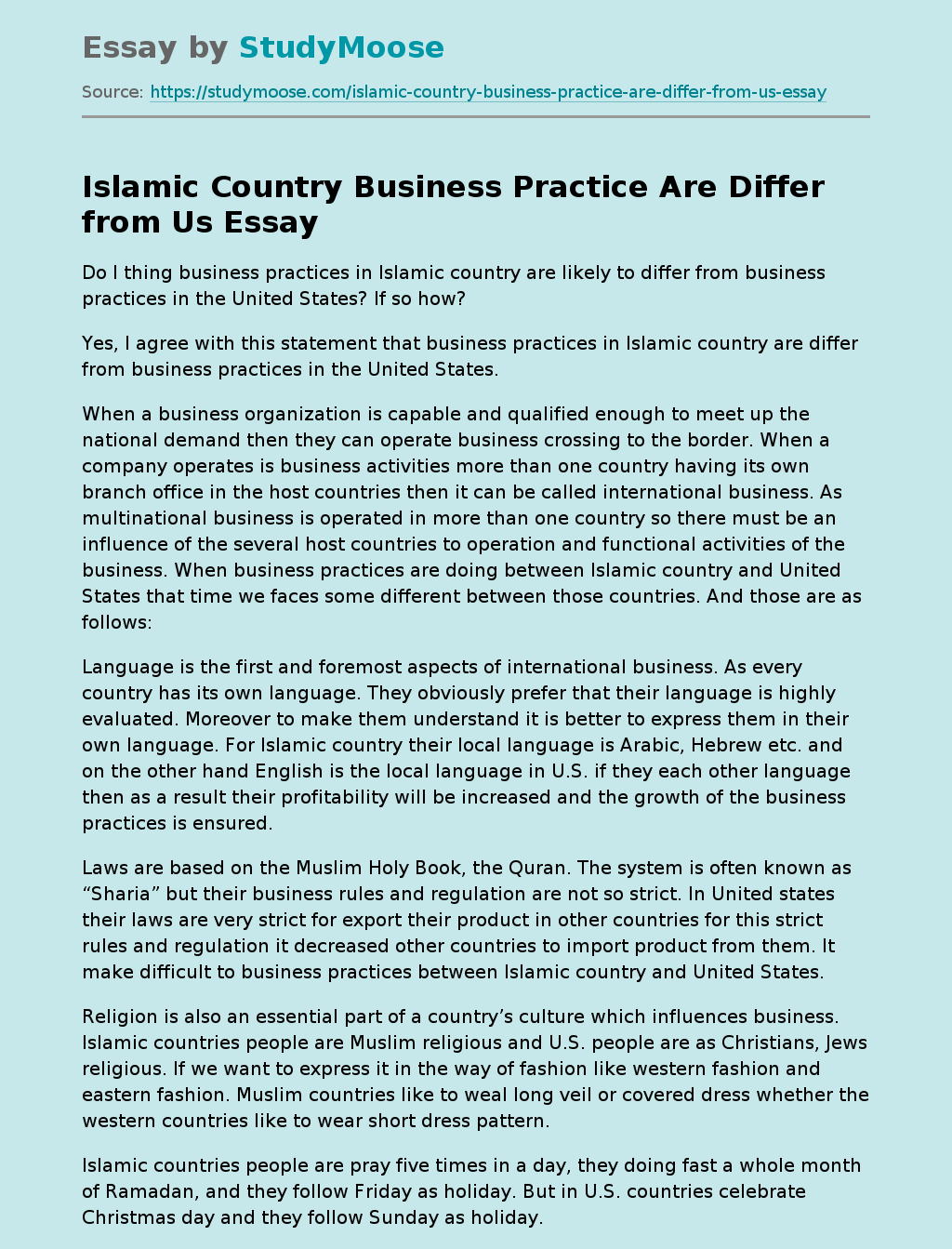