Is War Good or Bad Essay

The ongoing debate, is war good or bad? Usually if we see or hear the word “war” we think about the negative sides first. There is a saying that a forest fire burns everything in its path and it does destroy the forest but out of the ashes comes new life. War is similar to this. Out of destruction comes a new beginning. A country can benefit from war, by gaining wealth or freedom, increasing in power, and advancing in technology.

Don't use plagiarized sources.
Get Your Custom Essay on Is War Good or Bad Just from $13,9/Page

But the reason why war seems only negative is because there is also destruction where millions of innocent people die, losing their resources and time, and also their money. Not only within the country but the whole world could be affected by war economically and socially.

There are plenty of reasons why war is a bad thing. One main thing that comes to us directly and painfully is the death of the loved ones. Wars may solve problems but in the process it kills millions of people so war is cruel.

A good example is the WW2, almost 50-60 million people died. Also in a war, the country has to spend a lot of money. It needs to provide weapons like tanks missiles etc., and it needs as many troops as possible. As Chinese strategist Tzu Sun said, “Where the army is, prices are high; when prices rise the wealth of the people is exhausted” (Tzu Sun, c.400 BCE). For the citizens this is very disappointing because all this money would eventually come from raised taxes and instead this could be spent on poor and uneducated people. As I said, war brings destruction. Inflation is also a problem. For example after the Angola’s Civil War, their currency was so useless that bottles of beer replaced it. Special landmarks, farms, and firms could be destroyed and the country could lose a lot of its resources. After the war, usually the country goes in a huge debt.

On the other hand, war could be seen as a positive influence. Wars exist because people cannot agree on something. After the war it could be clear and they would agree and not fight anymore. Sometimes war could give freedom to a country. After war the country could become more powerful. If the war was because of land, after they win they have a bigger country with more resources. These resources could make the economy of the country rocket up. Also war in short-term is actually good for the economy. For example during the Great Depression, unemployment rate decreased. Since they need large amounts of weapons made quickly they hire more people and this leads to more jobs. Long-term wise a war could rebuild the economy of a country. Like the French, their production grew faster after WW1 and WW2. The country develops in technology too. They would need better more powerful strategies and weapons than the enemy’s so they research and develop in technology. Afterwards, this would benefit the country greatly.

Could this debate ever be over? I do not think so. As you can see, there are many bad and good sides of war. Overall I think wars are bad, because all these positive things are still not worth of millions of lives. And the good sides are if you win the war but that is not 100% sure. And even if things are resolved after the war, we are humans and we constantly want more. If the countries do not feel satisfied they might go into a second war and then a third and so on. So I think we should always find more peaceful ways than war. 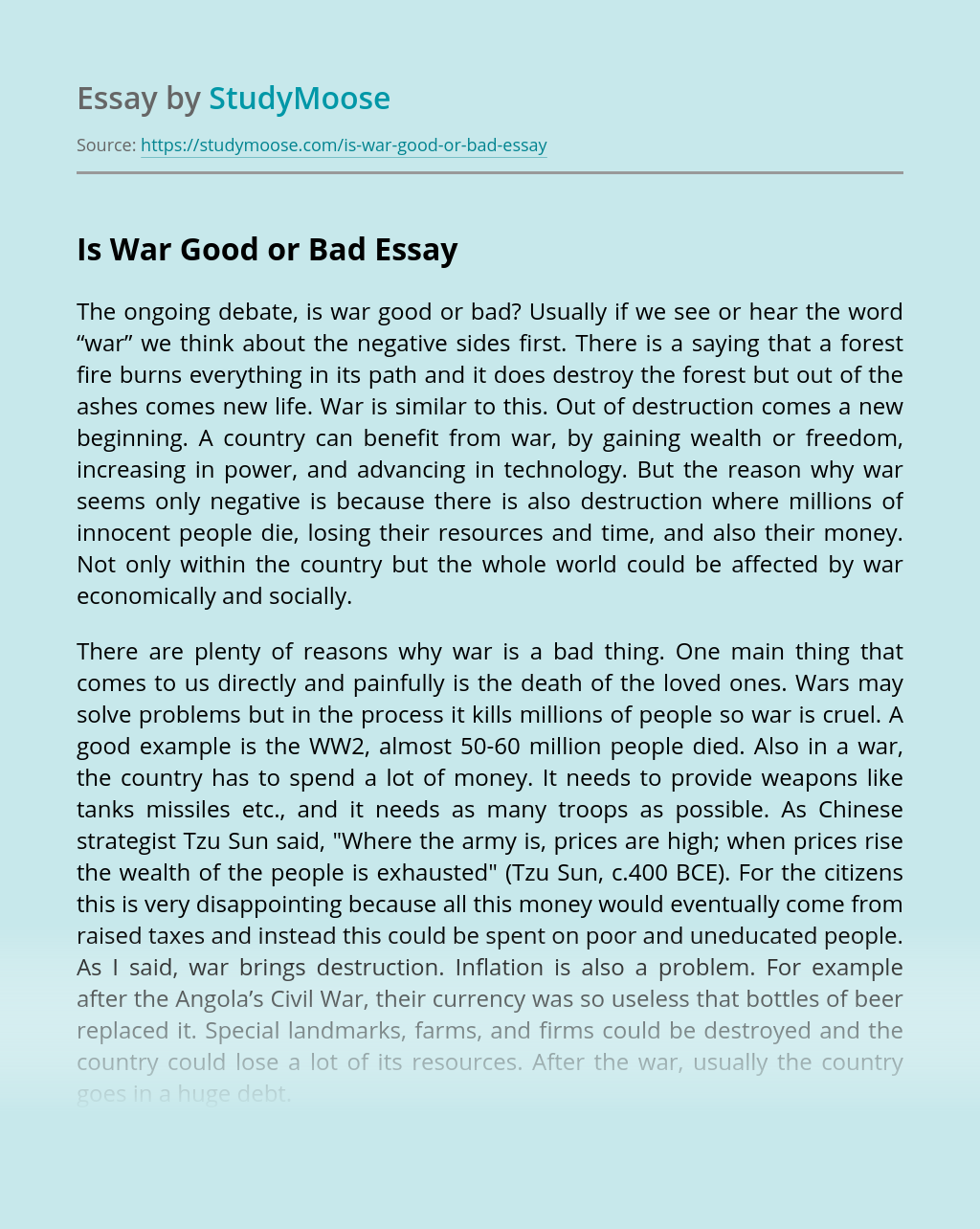 Journal Entry for Stephen Crane’s, An Episode of War

This short piece of American literature is a descriptive prose depicting a scene in the American Civil War. An unnamed lieutenant is wounded at his right arm while resting with the rest of his troops during an active battle. The story enables the readers to take part on the lieutenant’s perceptions on what is happening... VIEW ESSAY

View sample
Europe On The Eve Of World War I

World War I, or The Great War, in fact began on June 28, 1914 upon the assassination of the beneficiary to the Austro-Hungarian throne, Archduke Franz Ferdinand, by a Serbian national. This caused a series of fights upon the eventual formation of the Central Powers comprised of Germany, Austro-Hungary, the Turkish Ottoman Empire and Bulgaria,... VIEW ESSAY

Summary The “Iron Curtain” speech by Winston Churchill and the election speech of Joseph Stalin contain the similarity that they both are telling the audience what should and has happened. In Winston Churchill’s speech he outlines what has happened throughout World War II and the Cold War and how he thinks it should be handled... VIEW ESSAY

Johnny Depp, also known as Edward Scissorhands is the main focus of this movie. Edward being an invention “monster” as some might say, but he also has a kind heart for others. After the inventor “Father” of Edward died he stayed inclosed in the house, leaving him unfinished him having scissors for hands, he had... VIEW ESSAY