Is Tuition Classes Important to Sudents?

Students these days are increasingly pressured to churn out better and better academic results. As such, parents and the students themselves feel it is necessary to enrol in tuition classes. These after school classes, often conducted by school teachers trying to earn a little extra cash, provide an avenue to those who wish to improve on the subjects they are weak in, or secure a distinction for those they are already proficient in. Nowadays, it is actually rare to find a student, aside for those with economic difficulties, that does not attend tuition class.

Don't use plagiarized sources. Get your custom essay on
“ Is Tuition Classes Important to Sudents? ”
Get custom paper
NEW! smart matching with writer

However, is tuition really necessary? Many students of yesteryear managed to achieve high grades in their examinations while bereft of tuition classes. Students who completed their studies in the 70s up to the early 90s typically did not attend tuition class, yet their grades were no less spectacular than those today. This is mainly because studying for exams, like any other activity, is intrinsically driven.

One cannot force a student who is not motivated to swallow volumes of text and regurgitate it out during exams any more than one can force a tiger to change its stripes.

Inversely, as happened of yesteryears, students who are motivated to study will do so even if the only illumination available is a guttering candle. Another unsettling aspect of modern tuition classes is that it is only available to those who can afford it. Popular teachers command top dollar for students to enrol in their classes, or have such a large class that one could mistake it for a school assembly.

Tuition, unlike teachers teaching in school, is profit driven. Tuition centres allow teachers to rent their space for a percentage of the profits. If however the teacher under performs or is not economically viable, he or she will soon be given the boot.

Due to its market driven structure, one can consider tuition classes a form of elitism. Students will proudly compare which of their teachers is better or how they managed to secure a position in a class with a famous teacher, while student who are from the poorer economic group can only stand by and watch. This, in turn, enforces the class divide later on. Tuition’s concept is to allow the student to practice a subject more than the given amount of hours in school. This theoretically helps the student improve the said subject. For a majority, it really does work. Students do improve after participating in tuition classes. However, as pointed out above, studying is an intrinsic value. A student dragged kicking and screaming to do more exercises on a hated subject could potentially worsen the situation, rather than improve it.

The same concept, however, has allowed for some students to truly unlock their potential. Given the vast kaleidoscope of human interactions, it is entirely possible that a student does not “click” with his or her school teacher, but gets merrily along with the tuition teacher. Any psychologist will attest to that when a person is affable to another, the quality and quantity of the message conveyed has increased potency. It is possible that a student dislikes a given subject in school, but pays complete attention in tuition classes due to the quality and charisma of the teacher. When this happens, the tuition class fulfils its objective of improving the student’s said subject.

Tuition classes play a subtle, but highly important role that is not limited to the academic arena . Students from various schools often meet in tuition classes. This leads to interaction between students of different schools, classes and creeds. This lays an important foundation in the construction of a sociable person later on. The foundation of which a proper, functioning person who contributes back to society later on is built upon may, unlikely as it seems, be built during an Additional Mathematics tuition class. So is tuition necessary? My personal belief leans toward yes, it is necessary, but only for this day and age. Had this question been asked ten, twenty or even thirty years earlier, my answer would have been an unequivocal no.

Is Tuition Classes Important to Sudents?. (2016, Sep 24). Retrieved from https://studymoose.com/is-tuition-classes-important-to-sudents-essay 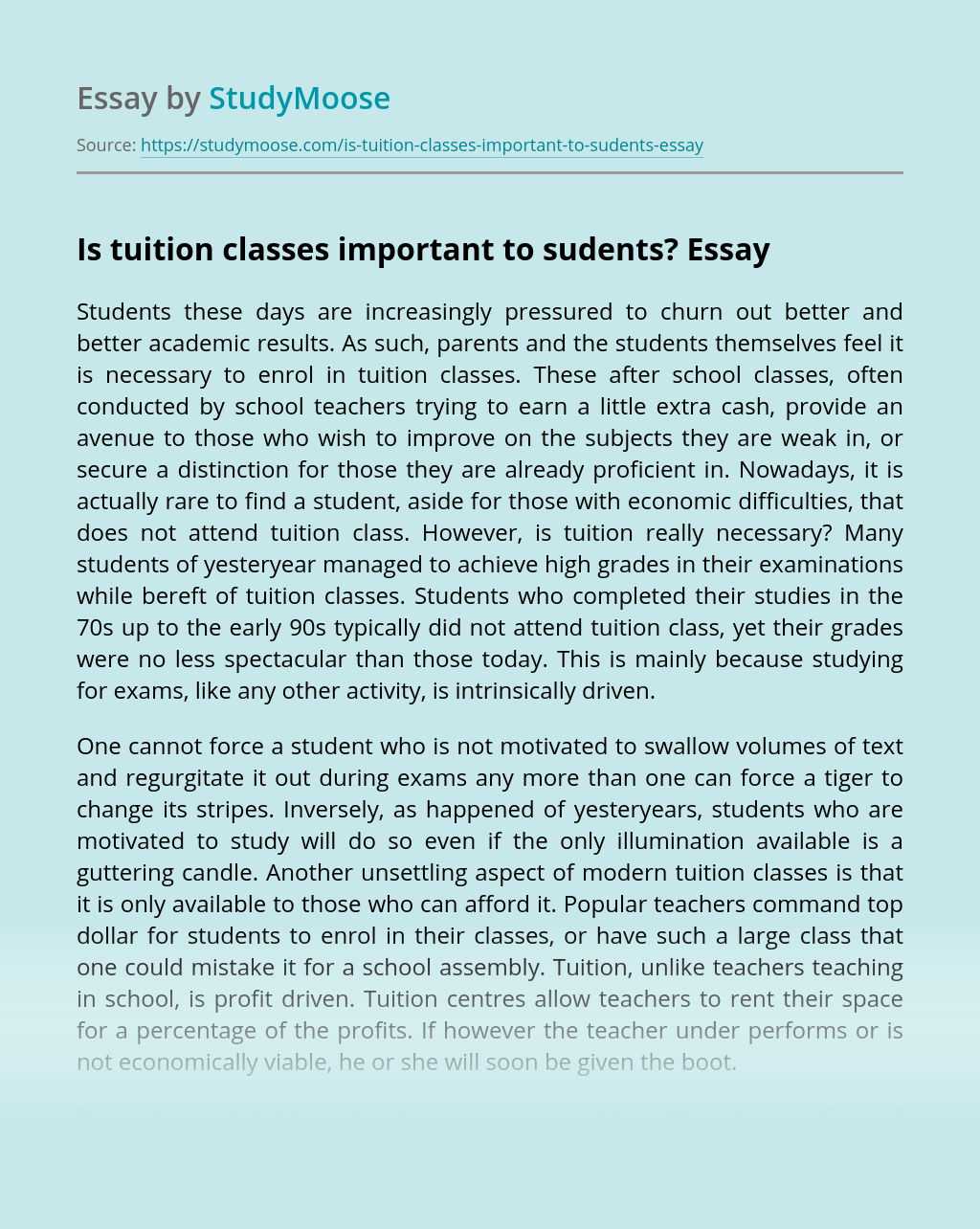